Without really knowing much about The Final Strife, I went into this book. I came for the sapphic content and stayed for everything. Even though I needed a long time to read it, I fell absolutely in love with Saara El-Arifi’s debut fantasy novel! Continue reading to find out what made this book so amazing.

ABOUT THE FINAL STRIFE

The Empire rules by blood
Red is the blood of the elite, of magic, of control.
Blue is the blood of the poor, of workers, of the resistance.
Clear is the blood of the servants, of the crushed, of the invisible.
The Aktibar – a set of trials held every ten years to find the next Ember rulers of the Empire – is about to begin.
All can join but not just anyone can win; it requires great skill and ingenuity to become the future wardens of Strength, Knowledge, Truth and Duty.
Sylah was destined to win the trials and be crowned Warden of Strength. Stolen by blue-blooded rebels she was raised with a Duster’s heart; forged as a weapon to bring down from within the red-blooded Embers’ regime of cruelty. But when her adopted family were brutally murdered those dreams of a better future turned to dust.
However, the flame of hope may yet be rekindled because Sylah wasn’t made to sparkle, she was born to burn.
And it’s up to her whether she rules the empire or destroys it. 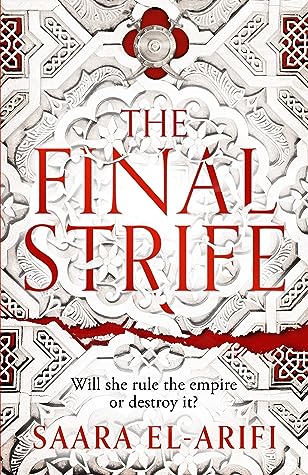 REVIEW OF THE FINAL STRIFE

*note: I was given a copy of this book by the publisher in exchange for my honest opinion*

Wow. Just wow. I don’t know really where to begin, there is so much I need to say. So much positive. The Final Strife is an amazing book with so many details in both character design and world building.

The world building is so well thought through. The people on the island of Nar-Ruta are the last people left on earth after a fire consumed everything else. They live in an empire controlled by four wardens of red blood. Embers, the people with red blood, are the top of society, they rule and control everything else with brutality and arrogance and secrets. The blueblooded people, Dusters, seem to be beneath them, sometimes no more than slaves. Those with clear blood, Ghostings, are mutilated servants, basically invisible to everyone else.
Everyone seems to have a set place in society, a blood class they can’t escape. Of course, there are people rebelling, some of them on a big scale, some of them hidden. While this society is brutal and harsh, I liked how it was written. It was well developed and explained how it all came into being.

I also loved El-Arifi’s way with words. She manages to create a scary world with a fitting atmosphere and just enough details to imagine everything. It was easy to feel the heat and dry air, the sand storms and the fear they bring, the subdued people who still have fight in their hearts, the heat and emotions of their gatherings. In contrast the impenetrable walls of the Embers’ Keep, the lightness of coming together as friends, the wish to change things, to be the change. It was like I could touch the tension between characters and hear their laughter.

Oh, and the characters! All of them are far from perfect but they were written perfectly in their imperfection. There is Sylah, the protagonist. The hopes of the rebellion rested on her shoulders until she brought them down. At the beginning of the book, she is mostly a shell of her former self, only living for the next joba seed, her drug of choice. She numbs her feelings and her surroundings, forgetting her old life for moments of emotional peace. I really enjoyed her character arc, how she tries to find back to herself or, find out who she is and what her goals in life are. She doesn’t hold back her opinions, she’s infuriating and angry and an absolute presence.

Then there’s Anoor. Sylah disguises herself as a servant to help both herself and Anoor. I loved Anoor’s development so, so much. She goes through so much growth and really develops a purpose in life. I love how she is a person of so many opposites, she’s soft and emotional, yet at her core she is steel. I generally loved all the contrasts in The Final Strife. The big divide between rich and poor, the contrast between loud, confident Sylah and Anoor, who isn’t sure of herself at all, the different approaches at rebellion.

I really am in awe of this book, the fantastic world building, the details that come to characterizations and this incredible atmosphere of the book. If you’re looking for your next favourite fantasy book, look no further, because The Final Strife is right there.

Do you plan on reading The Final Strife? What are your favourite fantasy books? Which other books with amazing world building can you think of?