WERBUNG / ADVERTISEMENT: I received a copy of this book in exchange for an honest review.

A Lair of Bones is the first book in the Curse of the Cyren Queen quartet, the second series by Helen Scheuerer after the Oremere Chronicles. Read on to see what I thought about this dark fantasy.

A deadly contest. A vaulting ambition. How far will one cyren go to win?
Mighty cyrens have ruled the ancient lair of Saddoriel for centuries. A cavernous fortress, a subterranean labyrinth of tunnels and levels, powered by magic and music…
From the moment she was born, Roh, the daughter of an infamous criminal, has been despised by her own kind. Restricted to the Lower Sector and forced to work as a common bone cleaner, she has always believed she belongs above: where lies adventure… and power.
Opportunity arises in the form of the Queen’s Tournament, a treacherous set of trials that could see the victor crowned ruler of the entire lair. Up against the most cunning, dangerous cyrens in all the realms, does Roh stand a chance? (goodreads) 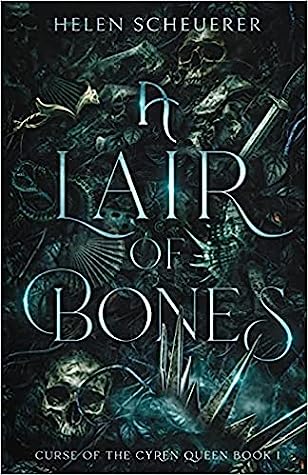 Ok, listen. I find sirens incredibly fascinating. I love tournaments. So of course the synopsis already got me very interested. Throw in an unlikely alliance and a dash of secrets and voilà, there’s a book exactly to my liking.Even better, when I end up absolutely liking the story which was the case with A Lair of Bones.

I really, really liked Roh as a main character. She’s strong but she also has flaws, is sometimes proud, sometimes selfish and definitely morally grey. She comes from the very bottom, determined to rise to the very top and she won’t stop at anything. Roh is smart and crafty and while she has a lot to learn still, she seems to have a feeling for her surroundings and the people around her.
I loved reading about her relationships. The complicated one with her mother, the warm one with her mentor, the friendship with her colleagues, the tentative one with a human. I liked how these relationships developed through the book, how they changed with Roh’s decisions. How the other characters reacted gave me a good glimpse into the other characters as well, how ruthless some of them are but also how many emotions they suppress.
And I just need to say that Roh’s assigned companion for the tournament, Odi, is such a cinnamon roll? Like, if something happens to him, I’ll hit Roh over the head for that.

The setting and the whole world of the Lair were amazing. The Lair is where the cyrens live, mostly hidden away from the world above. There is a bit of magic there, and always music for cyrens need music. While there is an enchanted sky, I always imagined it to be rather dark. The whole atmosphere of the book was dark, a twilight atmosphere with a few sources of light and I enjoyed it a lot. It added to the whole society of cyrens so well.

The further I got into the book, the more I enjoyed it. I had a few problems getting into it and wrapping my head around the world and how it works, but it all came with time.

A Lair of Bones was full of Roh’s journey to be someone more than she seems to be and involved a lot of action, potentially rash decisions, and darkness. It absolutely was a book for me and if this sounds like something you might enjoy… do yourself a favour and pick it up.