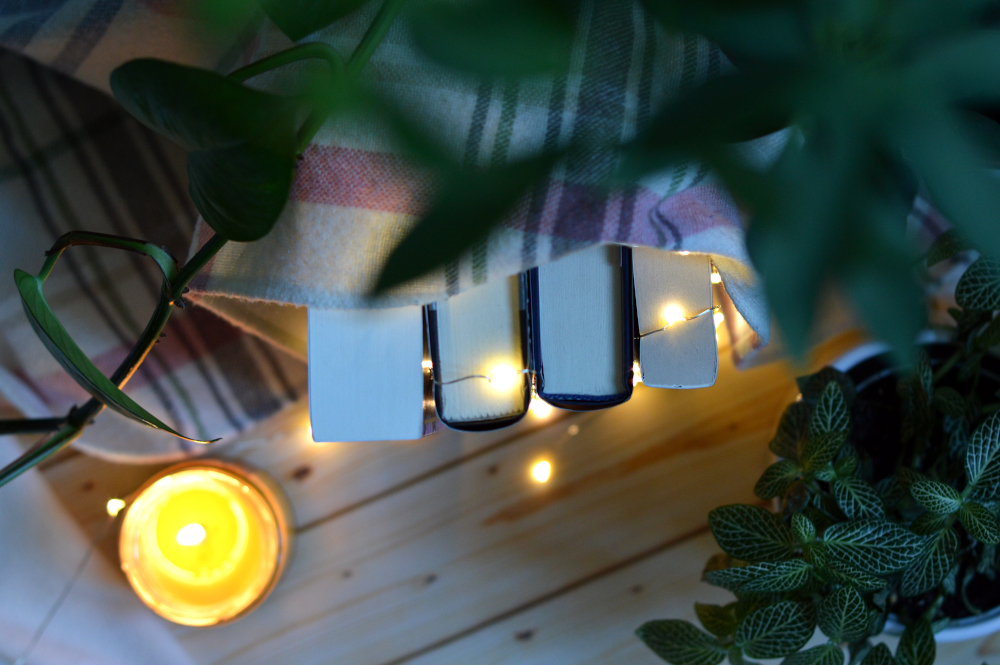 How are you? How has February treated you so far?

While January seemed to be endless, February is just running away. We’re already halfway through the month and I don’t understand where the time has gone.
I went to Berlin a week ago and my aunt gave me a 60€ gift card for my favourite bookstore and even though I promised myself not to buy books I don’t truly NEED or have already preordered, I of course got some new books. Some amazing new releases as well! Anyways, while we’re at new releases, let’s have a look at February’s releases that intrigue me a lot! 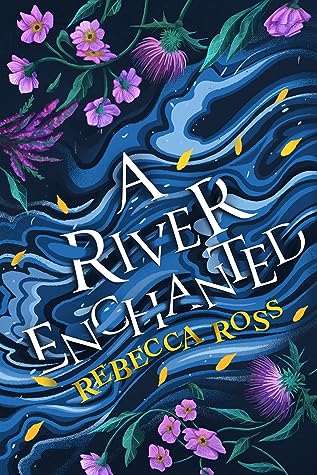 A River Enchanted by Rebecca Ross

Enchantments run deep on the magical Isle of Cadence: gossip is carried by the wind, plaid shawls can be as strong as armour, and the smallest cut of a knife can instil fathomless fear. The capricious spirits that live there find mirth in the lives of the humans who call the land home, but that mischief turns to malevolence as girls begin to go missing.
Adaira, heiress of the east, knows the spirits only answer to a bard’s music, enticing them to return the missing girls. But there’s only one bard capable of drawing the spirits forth by song: her childhood enemy Jack Tamerlaine.
He hasn’t stepped foot on Cadence in ten long years, content to study music at the mainland university, but as Jack and Adaira reluctantly work together it becomes apparent the trouble with the spirits is far more sinister than first thought and an older, darker secret lurks beneath the surface, threatening to undo them all. 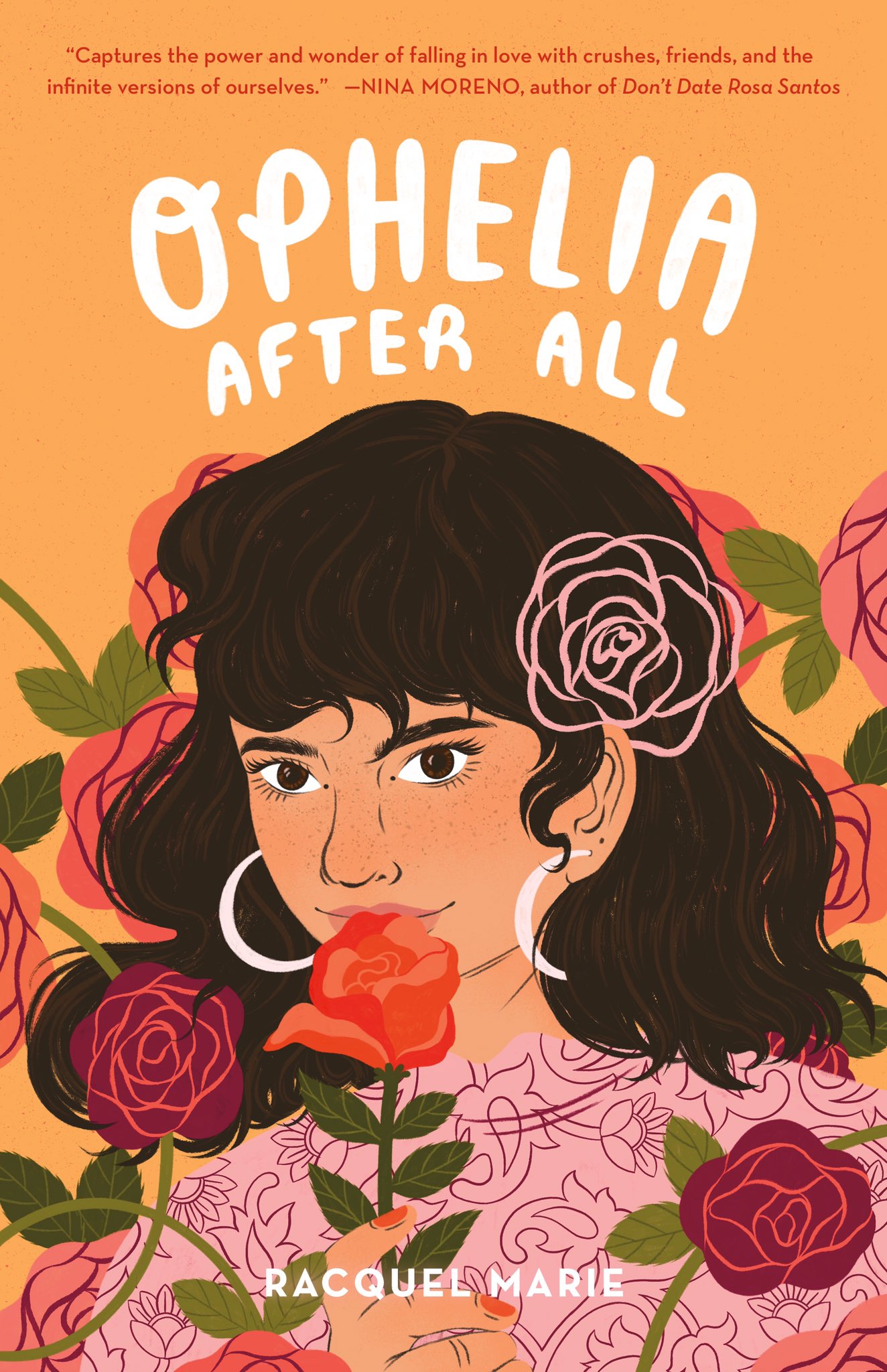 Ophelia After All by Racquel Marie

Ophelia Rojas knows what she likes: her best friends, Cuban food, rose-gardening, and boys – way too many boys. Her friends and parents make fun of her endless stream of crushes, but Ophelia is a romantic at heart. She couldn’t change, even if she wanted to.
So when she finds herself thinking more about cute, quiet Talia Sanchez than the loss of a perfect prom with her ex-boyfriend, seeds of doubt take root in Ophelia’s firm image of herself. Add to that the impending end of high school and the fracturing of her once-solid friend group, and things are spiraling a little out of control. But the course of love-and sexuality-never did run smooth. As her secrets begin to unravel, Ophelia must make a choice between clinging to the fantasy version of herself she’s always imagined or upending everyone’s expectations to rediscover who she really is, after all. 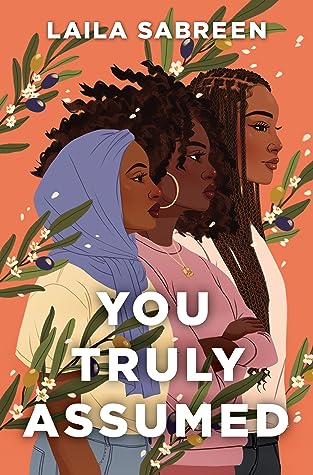 You Truly Assumed by Laila Sabreen

Sabriya has her whole summer planned out in color-coded glory, but those plans go out the window after a terrorist attack near her home. When the terrorist is assumed to be Muslim and Islamophobia grows, Sabriya turns to her online journal for comfort. You Truly Assumed was never meant to be anything more than an outlet, but the blog goes viral as fellow Muslim teens around the country flock to it and find solace and a sense of community.
Soon two more teens, Zakat and Farah, join Bri to run You Truly Assumed and the three quickly form a strong friendship. But as the blog’s popularity grows, so do the pushback and hateful comments. When one of them is threatened, the search to find out who is behind it all begins, and their friendship is put to the test when all three must decide whether to shut down the blog and lose what they’ve worked for…or take a stand and risk everything to make their voices heard.

Not the Witch You Wed by April Asher

Magic-less witch Violet Maxwell wants nothing to do with alpha wolf shifter Lincoln Thorne—the man who broke her fragile, teenage heart. But when the two of them are forced by arcane Supernatural Laws to find mates, Violet and Lincoln agree to fake-date their way to a fake-mating in order to conjure themselves some time.
The joke’s on them. When old feelings make a reappearance—along with Violet’s magic—they both realize there’s nothing fake about their feelings. But there are old secrets and looming threats that could snatch away their happily ever after, again. One thing’s for sure: magic doesn’t make dating and love any easier. 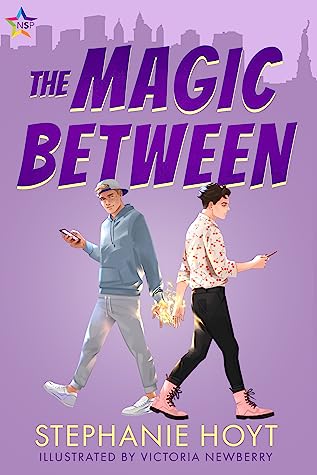 The Magic Between by Stephanie Hoyt

In a world where everyone has magic coursing through them, legend says magic itself craves a mate. Legend says those with opposite magics have the greatest chance of forming the unbreakable Bond it desires.
A.B. Cerise is an obsessive compulsive pop star with the ability to turn invisible. He’s an out bisexual with absolutely no belief in Bonds. He has a love-bruised heart, thinks dating in the spotlight is a hassle at best and a nightmare at worst, and has no intention of going through it all over again.
Matthew Hellman-Levoie is the NHL’s number one goalie prospect, the youngest in a hockey dynasty, and one of the rare few who can see the unseeable. He’s a straight man who wears his heart on his sleeve, has grown up searching for a Bond, and dreams of finding the love of his life.
Legend never said anything about what to do when sparks fly between two people opposite in more ways than just magic.

The Girl Who Fell Beneath the Sea by Axie Oh

Deadly storms have ravaged Mina’s homeland for generations. Floods sweep away entire villages, while bloody wars are waged over the few remaining resources. Her people believe the Sea God, once their protector, now curses them with death and despair. In an attempt to appease him, each year a beautiful maiden is thrown into the sea to serve as the Sea God’s bride, in the hopes that one day the “true bride” will be chosen and end the suffering.
Many believe that Shim Cheong, the most beautiful girl in the village—and the beloved of Mina’s older brother Joon—may be the legendary true bride. But on the night Cheong is to be sacrificed, Joon follows Cheong out to sea, even knowing that to interfere is a death sentence. To save her brother, Mina throws herself into the water in Cheong’s stead.
Swept away to the Spirit Realm, a magical city of lesser gods and mythical beasts, Mina seeks out the Sea God, only to find him caught in an enchanted sleep. With the help of a mysterious young man named Shin—as well as a motley crew of demons, gods and spirits—Mina sets out to wake the Sea God and bring an end to the killer storms once and for all.
But she doesn’t have much time: A human cannot live long in the land of the spirits. And there are those who would do anything to keep the Sea God from waking… 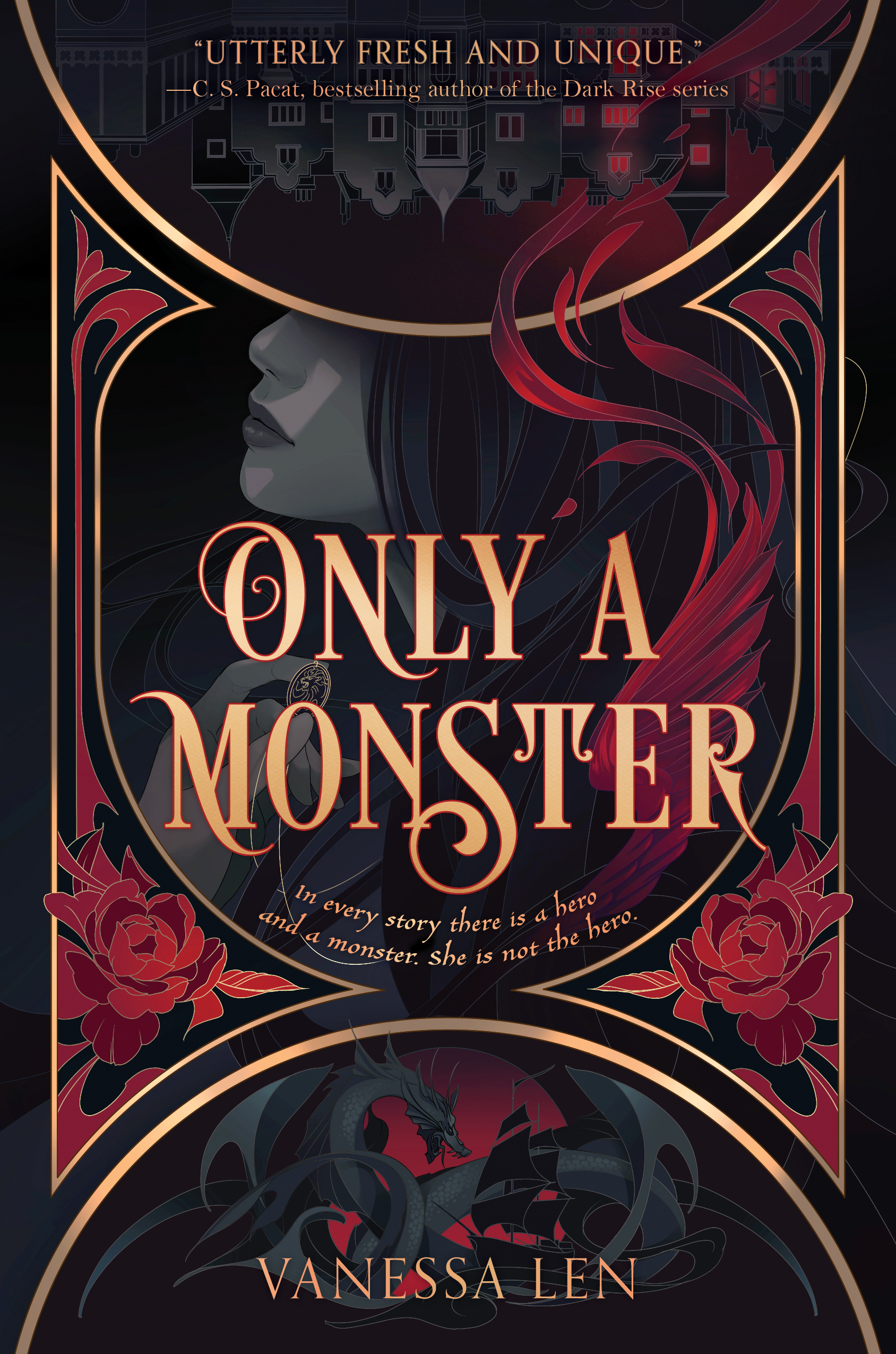 Only a Monster by Vanessa Len

It should have been the perfect summer. Sent to stay with her late mother’s eccentric family in London, sixteen-year-old Joan is determined to enjoy herself. She loves her nerdy job at the historic Holland House, and when her super cute co-worker Nick asks her on a date, it feels like everything is falling into place.
But she soon learns the truth. Her family aren’t just eccentric: they’re monsters, with terrifying, hidden powers. And Nick isn’t just a cute boy: he’s a legendary monster slayer, who will do anything to bring them down.
As she battles Nick, Joan is forced to work with the beautiful and ruthless Aaron Oliver, heir to a monster family that hates her own. She’ll have to embrace her own monstrousness if she is to save herself, and her family. Because in this story . . .
. . . she is not the hero. 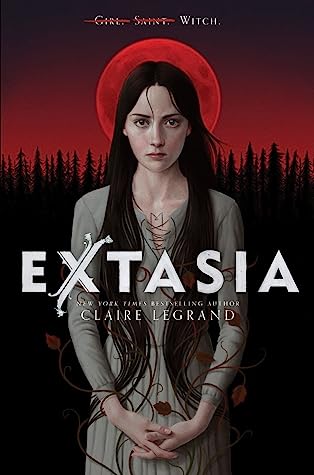 Her name is unimportant.
All you must know is that today she will become one of the four saints of Haven. The elders will mark her and place the red hood on her head. With her sisters, she will stand against the evil power that lives beneath the black mountain–an evil which has already killed nine of her village’s men.
She will tell no one of the white-eyed beasts that follow her. Or the faceless gray women tall as houses. Or the girls she saw kissing in the elm grove.
Today she will be a saint of Haven. She will rid her family of her mother’s shame at last and save her people from destruction. She is not afraid. Are you? 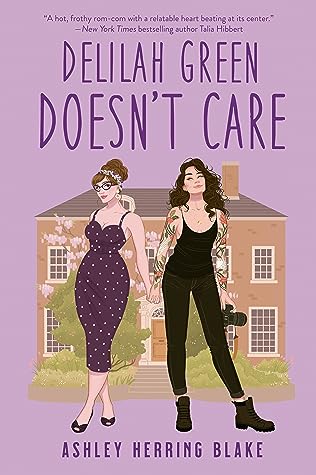 Delilah Green swore she would never go back to Bright Falls—nothing is there for her but memories of a lonely childhood where she was little more than a burden to her cold and distant stepfamily. Her life is in New York, with her photography career finally gaining steam and her bed never empty. Sure, it’s a different woman every night, but that’s just fine with her.
When Delilah’s estranged stepsister, Astrid, pressures her into photographing her wedding with a guilt trip and a five-figure check, Delilah finds herself back in the godforsaken town that she used to call home. She plans to breeze in and out, but then she sees Claire Sutherland, one of Astrid’s stuck-up besties, and decides that maybe there’s some fun (and a little retribution) to be had in Bright Falls, after all.
Having raised her eleven-year-old daughter mostly on her own while dealing with her unreliable ex and running a bookstore, Claire Sutherland depends upon a life without surprises. And Delilah Green is an unwelcome surprise…at first. Though they’ve known each other for years, they don’t really know each other—so Claire is unsettled when Delilah figures out exactly what buttons to push. When they’re forced together during a gauntlet of wedding preparations—including a plot to save Astrid from her horrible fiancé—Claire isn’t sure she has the strength to resist Delilah’s charms. Even worse, she’s starting to think she doesn’t want to… 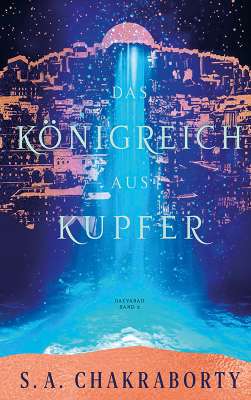 What February releases are you excited for? Have you read any yet? Do you preorder books?

That’s it from me and the books I think sound super cool! See you next month for more exciting releases,