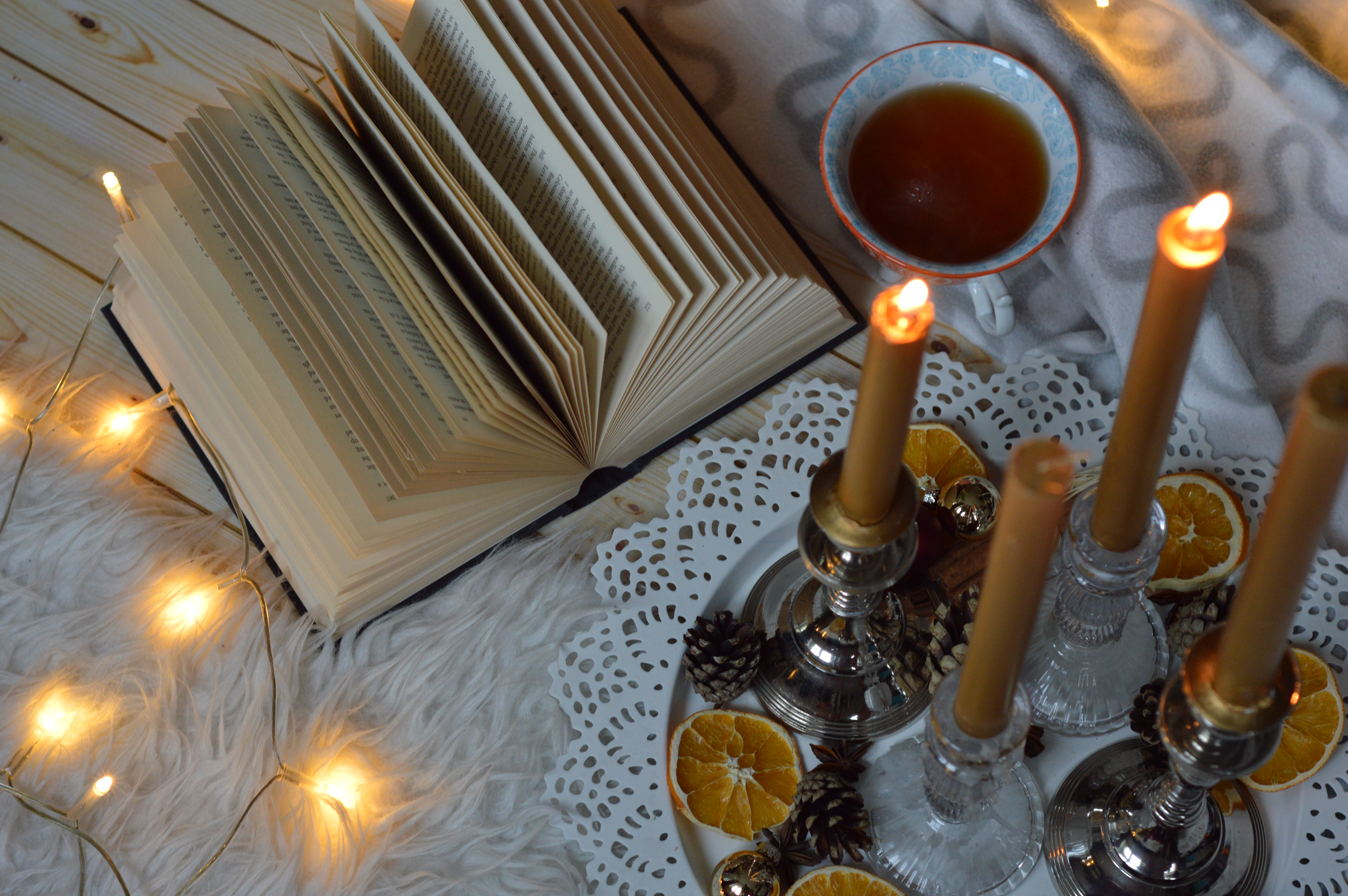 Welcome to part two of my November Book Haul! You can find part 1 here. Now this is for review copies and the books I did not buy on the sale.

The Crown’s Game by Evelyn Skye

Vika Andreyeva can summon the snow and turn ash into gold. Nikolai Karimov can see through walls and conjure bridges out of thin air. They are enchanters—the only two in Russia—and with the Ottoman Empire and the Kazakhs threatening, the tsar needs a powerful enchanter by his side.
And so he initiates the Crown’s Game, an ancient duel of magical skill—the greatest test an enchanter will ever know. The victor becomes the Imperial Enchanter and the tsar’s most respected adviser. The defeated is sentenced to death.
Raised on tiny Ovchinin Island her whole life, Vika is eager for the chance to show off her talent in the grand capital of Saint Petersburg. But can she kill another enchanter—even when his magic calls to her like nothing else ever has?
For Nikolai, an orphan, the Crown’s Game is the chance of a lifetime. But his deadly opponent is a force to be reckoned with—beautiful, whip-smart, imaginative—and he can’t stop thinking about her.
And when Pasha, Nikolai’s best friend and heir to the throne, also starts to fall for the mysterious enchantress, Nikolai must defeat the girl they both love…or be killed himself.
As long-buried secrets emerge, threatening the future of the empire, it becomes dangerously clear—the Crown’s Game is not one to lose. (goodreads) 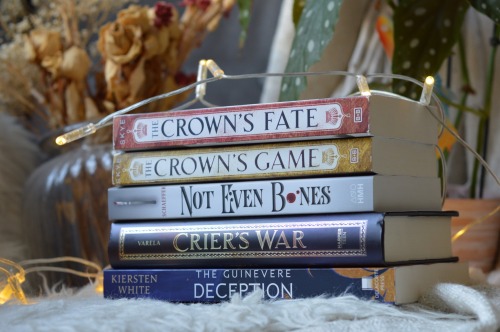 Russia is on the brink of great change. Pasha’s coronation approaches, and Vika is now the Imperial Enchanter, but the role she once coveted may be more difficult—and dangerous—than she ever expected.
Pasha is grappling with his own problems—his legitimacy is in doubt, the girl he loves loathes him, and he believes his best friend is dead. When a challenger to the throne emerges—and with the magic in Russia growing rapidly—Pasha must do whatever it takes to keep his position and protect his kingdom.
For Nikolai, the ending of the Crown’s Game stung deeply. Although he just managed to escape death, Nikolai remains alone, a shadow hidden in a not-quite-real world of his own creation. But when he’s given a second chance at life—tied to a dark price—Nikolai must decide just how far he’s willing to go to return to the world.
With revolution on the rise, dangerous new magic rearing up, and a tsardom up for the taking, Vika, Nikolai, and Pasha must fight—or face the destruction of not only their world but also themselves. (goodreads)

After the War of Kinds ravaged the kingdom of Rabu, the Automae, designed to be the playthings of royals, usurped their owners’ estates and bent the human race to their will.
Now Ayla, a human servant rising in the ranks at the House of the Sovereign, dreams of avenging her family’s death…by killing the sovereign’s daughter, Lady Crier.
Crier was Made to be beautiful, flawless, and to carry on her father’s legacy. But that was before her betrothal to the enigmatic Scyre Kinok, before she discovered her father isn’t the benevolent king she once admired, and most importantly, before she met Ayla.
Now, with growing human unrest across the land, pressures from a foreign queen, and an evil new leader on the rise, Crier and Ayla find there may be only one path to love: war. (goodreads) 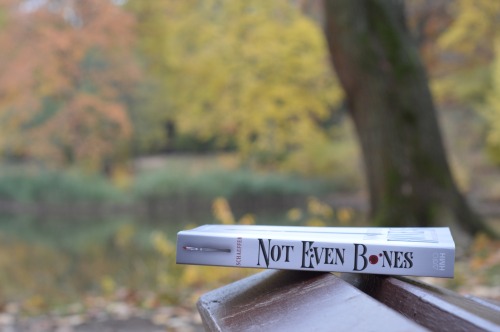 Not even Bones by Rebecca Schaeffer

Nita doesn’t murder supernatural beings and sell their body parts on the internet—her mother does that. Nita just dissects the bodies after they’ve been “acquired.” But when her mom brings home a live specimen, Nita decides she wants out — dissecting living people is a step too far.
But when she tries to save her mother’s victim, she ends up sold on the black market in his place — because Nita herself is a supernatural being. Now Nita is on the other side of the bars, and there is no line she won’t cross to escape and make sure no one can ever capture her again.
Nita did a good deed, and it cost her everything. Now she’s going to do a lot of bad deeds to get it all back. (goodreads)

The Guinevere Deception by Kiersten White

There was nothing in the world as magical and terrifying as a girl.
Princess Guinevere has come to Camelot to wed a stranger: the charismatic King Arthur. With magic clawing at the kingdom’s borders, the great wizard Merlin conjured a solution-send in Guinevere to be Arthur’s wife . . . and his protector from those who want to see the young king’s idyllic city fail. The catch? Guinevere’s real name–and her true identity–is a secret. She is a changeling, a girl who has given up everything to protect Camelot.
To keep Arthur safe, Guinevere must navigate a court in which the old-including Arthur’s own family-demand things continue as they have been, and the new-those drawn by the dream of Camelot-fight for a better way to live. And always, in the green hearts of forests and the black depths of lakes, magic lies in wait to reclaim the land. Arthur’s knights believe they are strong enough to face any threat, but Guinevere knows it will take more than swords to keep Camelot free.
Deadly jousts, duplicitous knights, and forbidden romances are nothing compared to the greatest threat of all: the girl with the long black hair, riding on horseback through the dark woods toward Arthur. Because when your whole existence is a lie, how can you trust even yourself? (goodreads) 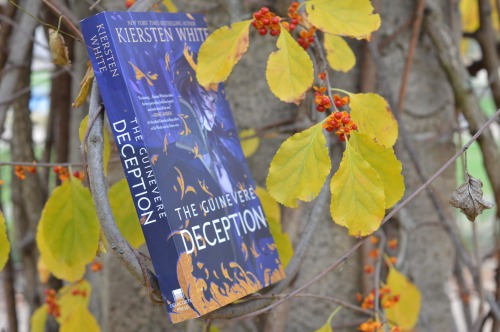 Two years ago, Louise le Blanc fled her coven and took shelter in the city of Cesarine, forsaking all magic and living off whatever she could steal. There, witches like Lou are hunted. They are feared. And they are burned.
Sworn to the Church as a Chasseur, Reid Diggory has lived his life by one principle: thou shalt not suffer a witch to live. His path was never meant to cross with Lou’s, but a wicked stunt forces them into an impossible union—holy matrimony.
The war between witches and Church is an ancient one, and Lou’s most dangerous enemies bring a fate worse than fire. Unable to ignore her growing feelings, yet powerless to change what she is, a choice must be made.
And love makes fools of us all. (goodreads) 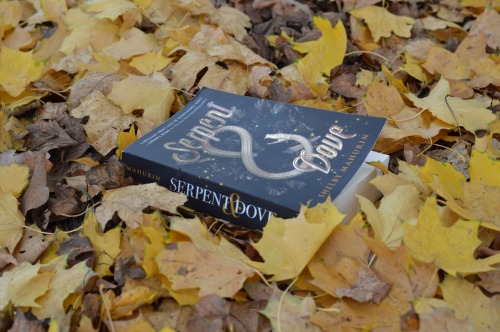 The Ninth Sorceress by Bonnie Wynne

In the blackest dungeon of the Clockwork City, a prisoner lies bound in silver shackles. Who is she? And why are the wizards so afraid of her?
Seventeen-year-old Gwyn has no family and no past. Apprenticed to a half-mad herbalist, she travels the snow-blasted High Country, hawking potions in a peddler’s wagon. Her guardian hides her from the world like a dark secret, and she knows better than to push for answers.
But when she discovers she is hunted by the goddess Beheret, Gwyn is drawn into a deep and ancient tale: of chained gods and lost magic, of truths long buried and the rising of a war she never could have imagined.
Wizards and their magic-sniffing hounds pursue her – as does a stranger in a smiling mask, who calls her by an unfamiliar name…
But what really terrify her are the dangerous gifts she’s spent her life suppressing. Now, Gwyn must step out of the shadows and take charge of her destiny – even if the price is her own soul. (goodreads)

When eighteen-year-old Ever Wong’s parents send her from Ohio to Taiwan to study Mandarin for the summer, she finds herself thrust among the very over-achieving kids her parents have always wanted her to be, including Rick Woo, the Yale-bound prodigy profiled in the Chinese newspapers since they were nine—and her parents’ yardstick for her never-measuring-up life.
Unbeknownst to her parents, however, the program is actually an infamous teen meet-market nicknamed Loveboat, where the kids are more into clubbing than calligraphy and drinking snake-blood sake than touring sacred shrines.
Free for the first time, Ever sets out to break all her parents’ uber-strict rules—but how far can she go before she breaks her own heart? (goodreads)

For Penny Lee high school was a total nonevent. Her friends were okay, her grades were fine, and while she somehow managed to land a boyfriend, he doesn’t actually know anything about her. When Penny heads to college in Austin, Texas, to learn how to become a writer, it’s seventy-nine miles and a zillion light years away from everything she can’t wait to leave behind.
Sam’s stuck. Literally, figuratively, emotionally, financially. He works at a café and sleeps there too, on a mattress on the floor of an empty storage room upstairs. He knows that this is the god-awful chapter of his life that will serve as inspiration for when he’s a famous movie director but right this second the seventeen bucks in his checking account and his dying laptop are really testing him.
When Sam and Penny cross paths it’s less meet-cute and more a collision of unbearable awkwardness. Still, they swap numbers and stay in touch—via text—and soon become digitally inseparable, sharing their deepest anxieties and secret dreams without the humiliating weirdness of having to see each other. (goodreads)

Yes no maybe so by Becky Albertalli and Aisha Saeed