Series I want to finish before 2021 ends

Today I bring you series I still want to finish this year! Logically, it should be possible to read all of the remaining books but then knowing myself… will I really manage to read all of them? With one exception, I have one book left in each of the series and with quite a few of them I’m not exactly ready to let them go. While I want to know how they conclude, I really don’t want them to end, either because I just love the world so much or because they’ve been a part of my reading life for so long, I only know how to have them unfinished.
Does that sound weird? Or is that a relatable feeling? Are you bad at finishing series or do you actually end what you started?

And before I get poetical about finishing things, let’s have a look at the series I still want to finish before 2021 ends…

Books I need to read: The Bronzed Beasts (#3)

The first book in the series, The Gilded Wolves is set in Paris in the late 19th century, the follow up, The Silvered Serpents near Lake Baikal and the third in Venice. The books are a historical urban fantasy series centered around a group of uniquely talented youth, a young heir and hotelier, a historian who never feels like he fits anywhere, a Polish Jewess who likes tinkering and inventing things, an Indian girl who shouldn’t exist but thanks to magic does, a boy with a thing for venomous plants, an heir who more or less stumbles into the group.
There are heists and romances, lush and magical writing, wonderfully crafted characters and beautiful imagination on the author’s part. This is one of my favourite series and I’m so happy I at least own The Bronzed Beasts and can finish the series soon! Even though it’ll probably break my heart.

Away by Anabelle Stehl

This is a German New Adult romance series set in Berlin. It follows a group of friends with a different pairing in each book. I love that the series discusses difficult topics and I especially liked how it deals with them. Sensitive, yet empowering and it’s clear that the author herself is interested in them and has thought about how to approach them. The whole series is very well written and I liked seeing all the glimpses of Berlin there, a city I actually know fairly well. And one of the characters has the same name as me, so there’s that as well!

I had book one, Crown of Feathers, sitting on my shelf unread for years until I finally picked it up this year and got quickly very invested in the story. It follows a girl who desperately wants to join the Phoenix Riders. I loved the magic in this book and the bond between humans and phoenixes. I also loved the different PoVs and how they are all connected. I especially liked Veronyka, the main character and her struggles with her situation and her sister who she loves but isn’t always on the same page with. I liked the hinted secrets and the reveals and the twists. It’s such a gripping story and I very much want to continue the story soon!

I absolutely cannot wait for Jade Legacy to release later this year. Honestly, this is one of my all time favourite series and I am so desperately in need of the third and last book while also dreading it because it might very well be the book that’ll give me a book hangover. I love this series about clans and clan wars, love and family and friendship and Jade that enhances one’s abilities so, so incredibly much. The world building is incredibly well thought out and all the politics and intrigues really make The Green Bone Saga one of a kind. I’m serious, if you can stomach brutality, then do yourself a favour and read these books. They’re SO WORTH IT.

This might be another book with the ability to give me a serious book hangover. I devoured These Violent Delights last year, a retelling of Romeo and Juliet set in 1920s Shanghai with a mysterious plague and monsters and locals gangs kicking each other’s and colonialists’ asses. I loved the set of characters and how they interacted so much, I loved how fierce the women were. I loved the romance and the could bes and the friendships. I loved the action and the setting. And I’m absolutely thrilled to have this book in my hands in less than a month to read it immediately!

Girls of Paper and Fire by Natasha Ngan

This series tells the story of Lei and Wren who both come to the court as Paper girls, girls without any power who are mainly there for the cruel king’s amusement and pleasure. But they fight for themselves and their freedom. It’s often dark and brutal, but it also has beautiful, hopeful moments. Girls of Paper and Fire is packed with action scenes and tender moments and I’m both very excited and very nervous to see what the third and last book of the series has in store for Lei and Wren.

An Ember in the Ashes by Sabaa Tahir

These books have been a part of my reading journey ever since the first book was released back in 2015 (?). I fell in love with Sabaa’s writing and her imagination and the characters she wove into this cruel, terrible world. I put off reading the fourth and last book of the An Ember in the Ashes series for almost a year and I don’t even know why. I’m usually good with finishing series but this is one I don’t want to end. I want to treasure it a bit more.
The story follows Laia, Elias and Helene who should be enemies but become part of a revolution against something far more powerful and darker than they originally thought. I love the romance in these books, I love the characters so incredibly much, I love their strength and resilience and their development. 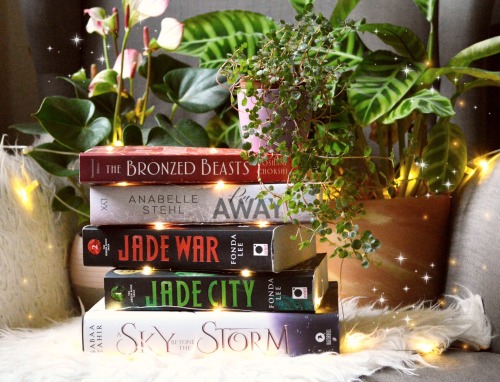 Are there any series you want to finish before 2021 ends? Or any other books?