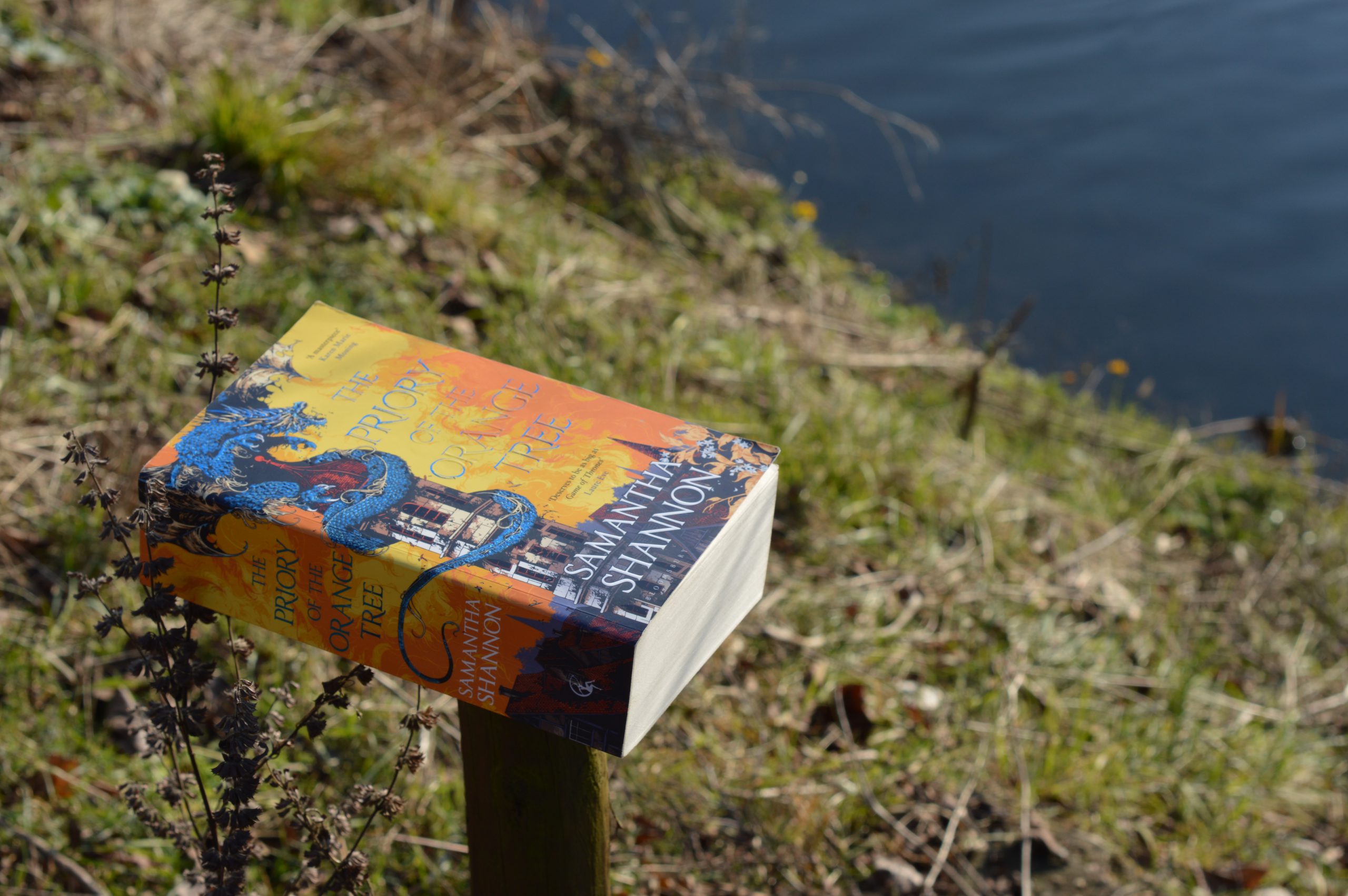 In 2019, I read many, many good books. I’ve also read some great books. And today, I’d love to show you which ones I especially enjoyed. Beware, there might be spoilers for previous books, if I’m talking about seconds or thirds. Also, I won’t count rereads because let’s face it: the Grisha Trilogy and Harry Potter are in their own category for me. They’re part of my soul, can’t rate them. I forogto I wrote this post and I just found it again, so here ya go: my faves of 2019.

This is a book about two friends to enemies to lovers. It follows Lennon and Zorie who are stuck with each other camping in a national park after their friends leave them there. I enjoyed this immensely, the banter and the secrets, the tension, the shared past. It was fun and quick and for me basically the start to a year of Jenn Bennett books.
⇒ goodreads

THE PRINCESS AND THE FANGIRL BY ASHLEY POSTON

Imogen is a fangirl, Jess an actress in the film to her favourite show. When the two get confused for each other at a convention, chaos is inevitable. But there is also room for friendship and love. So, I loved everything about this story. The feeling of a convention that is more like coming home, the pop culture references, the two main characters. The two romances, one of them being enemies-to-lovers, the other being f/f. The families and friendships forming and seeing favourite characters from book one.
⇒ goodreads 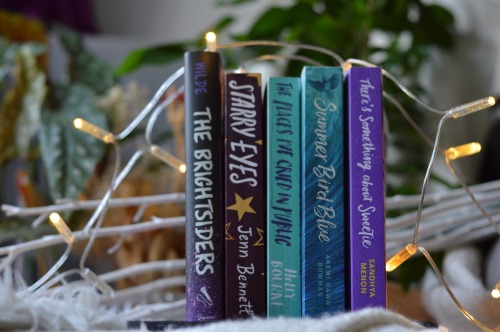 THE WICKED KING BY HOLLY BLACK

Jude managed the unbelievable: she revealed Oak’s right to the throne and bound herself to Cardan. Whom she also made king. She has to manage the court and the schemes while also coping with her feelings for Cardan. And wow, that was amazing. Even though Jude and Cardan are a horrible couple, I love them so much? I loved the pace of the novel, all the intrigues and the cruelty. Just wow wow wow.
⇒goodreads

This graphic novel series follows Nick and Charlie, two boys from Truham Grammar School for Boys. Charlie has been out for a while and he finds himself drawn to his new friend, Nick. Who is straight. Or isn’t he?
God, I love them. I love them so much. Nick and Charlie are so cute. Nick is cute. Charlie is cute. Together they are double cute. They have to deal with problems and obstacles in their way, but they are made for each other. I’m sorry but they are. I also think the drawings fit the story extremely well.
⇒goodreads 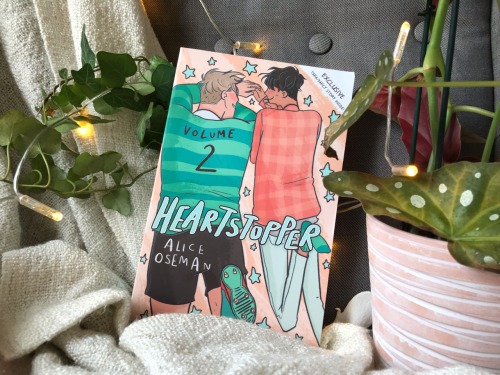 BAKING FOR DAVE BY MELISSA PALMER

Iris has Sensory Processing Disorder and loves to bake. She runs away to participate in a baking competition. On the way she meets Chris, who ran away from his life and wife. They become friends and look out for each other while dealing with the stuff life is throwing at them.
This book was amazing. It was beautiful and heartbreaking, made me laugh and cry. It has such wonderful characters and such a focus on friendship and family love. It talks about Iris’ disorder and about depression, about found family and about the good in humans.
⇒goodreads

WE HUNT THE FLAME BY HAFSAH FAIZAL

Zafira is a hunter, Nasir is a prince. And an assassin. Together with three others, they are thrown on a magical island for a quest that might kill them or save their world.
Everything about this book is beautiful. The cover, the writing, the characters. Hafsah has such a wonderful way of writing, it feels like poetry sometimes and is richly detailed. I loved the characters interact with each other and I also immensely enjoyed the setting inspired by Ancient Arabia.
⇒goodreads 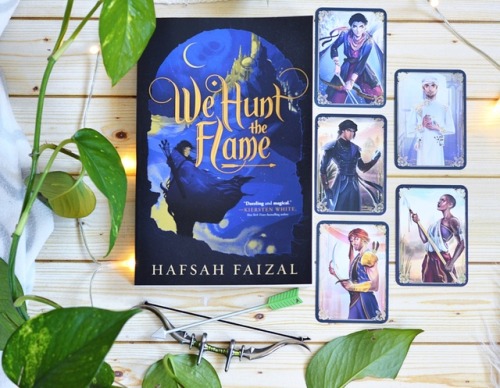 Rumi and Leah are sisters that are extremely different but are each other’s world. Then Leah dies in an accident and Rumi is shipped off to her aunt in Hawaii to deal with it.
This book can be described in two words: sad and hopeful. I cried a lot but it was also such a beautifully written book, showing what losing a loved one can do to a person and how hard it is to heal. Or trying to heal. It also talks about finding yourself and accepting yourself and trying to understand others as well.
⇒goodreads 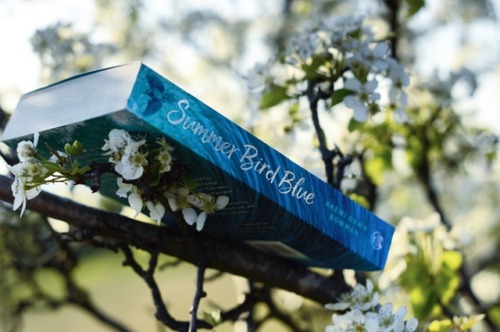 WICKED SAINTS BY EMILY A. DUNCAN

Nadya can speak to gods and believes in the old ways. With a mysterious, dangerous boy named Malachiasz she has to try and stop a war, while being closely followed by a prince who plans to kill her.
Here’s the thing. I don’t know why I loved it so much. It just spoke to me. It was dark and bloody and brutal but I fell in love with this cold, cold world and its characters. Escpecially Malachiasz. My love. There is magic and loneliness, love and betrayal, fighting and myths.
⇒goodreads 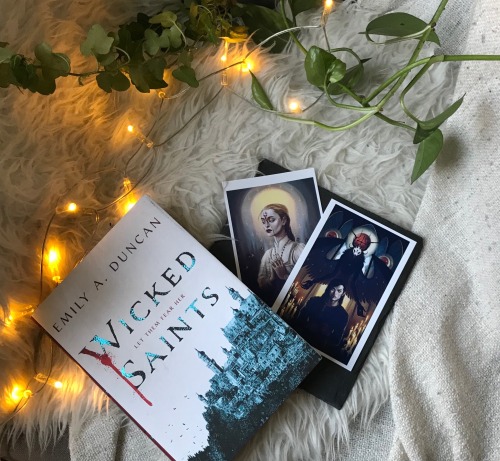 IN THE SILENCES BY RACHEL GOLD

Kaz just wants to enjoy their time with their best friend Aisha, a black girl who moved into the neighbourhood. But they have to deal with queermisia and racism and their families, while trying to wrap their minds around their feelings.
This book is so important. It talks about being unsure of your sexuality and gender and to find the way to yourself while your family doesn’t accept it. It talks about racism. It is quite dark at some parts, it hurt but it also gave hope and showed that there is a way.
⇒goodreads 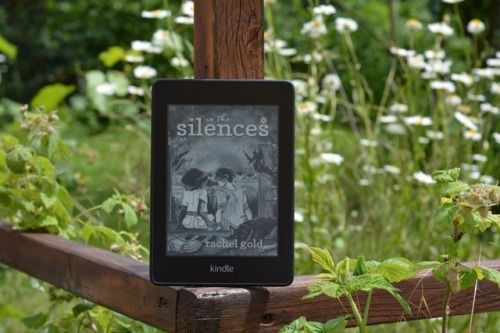 Alex is the son of the president of the United States. For years now he’s had a grudge against prince Henry. After fight, British and US relationships turn worse and the governments work out a plan: they have to become friends, at least for the public.
RWRB was amazing, fast paced, funny and witty with wonderful characters. It spoke to me in the sense of Alex being in his 20s and questioning his sexuality. I loved Henry and Alex and how their relationship develops and how they each grow. I loved the politics as well. And the other characters and the dialogues. Ah, this whole book is so fun and great.
⇒goodreads 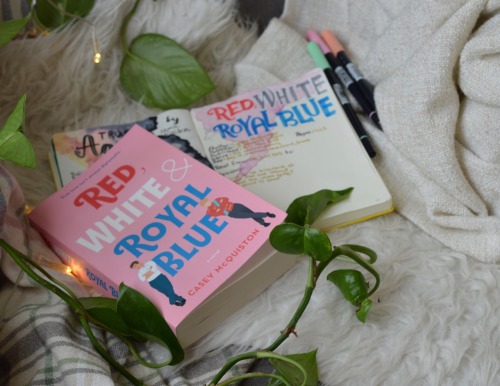 Socially awkward Alex has to spend his summer alone after his two best friends leave for vacation together. He starts working at Wonderland, an arcade where he finds new friends… and Ben. Who has a girlfriend. Wonderland has financial problems and the group wants to save it.
I read this book in one sitting on the train back from London. And I laughed tears. Let me just say that the guy next to me looked at me as if I lost my mind or something. This book is so fun and so gay and I had the absolutely best time reading it. The perfect summer book!
⇒goodreads 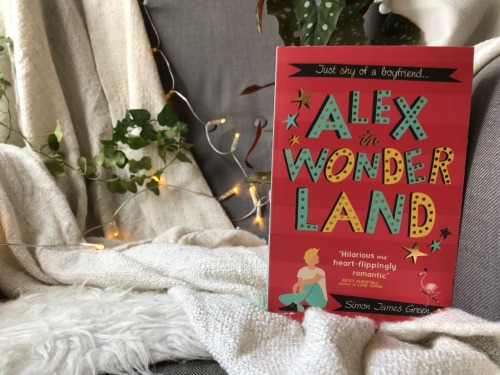 SORCERY OF THORNS BY MARGARET ROGERSON

Elisabeth grew up at one of the Great Libraries talking to books and making mischief with her roommate and best friend. She believes firmly in the evilness of all sorcerers. But then her life gets tangles up with Nathaniel Thorn, a sorcerer, and his demon servant. They get thrown into a conspiracy.
I love a tall, sword-swinging librarian with a genius aro/ace best friend, a wonderful sorcerer and a sarcastic demon. This book was so fun! Full of sarcasm, dumb ideas, people getting in trouble and wielding swords and magic. The characters in this book are all unique and sarcastic and a force of their own. I liked the magic and I kind of wish it wasn’t a standalone while also finding the one book is enough. I just fell in love with the characters so very completely.
⇒goodreads 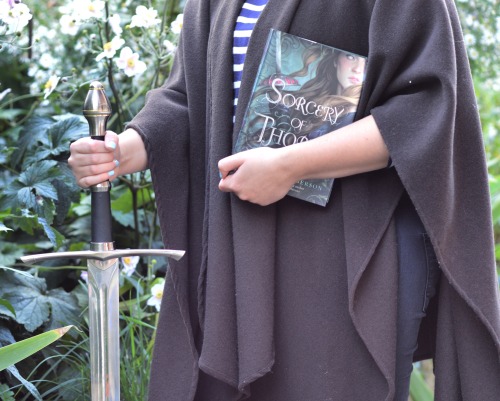 THE PRIORY OF THE ORANGE TREE BY SAMANTHA SHANNON

The East and the West are divided. But the only way to save the world from the rising of the Nameless One, an evil dragon that has been banished deep into the ocean.
Wow, this was an amazing, wonderfully big book. It was feminist af and also diverse af. And I enjoyed it so much, from the slower introduction, rich in details up to the fighting scenes. The politics were described amazingly, the characters each had their own voices. There were swords and magic and dragons and ichneumons and secrets and intrigues and it was all so well developed and complex. Loved it!
⇒goodreads 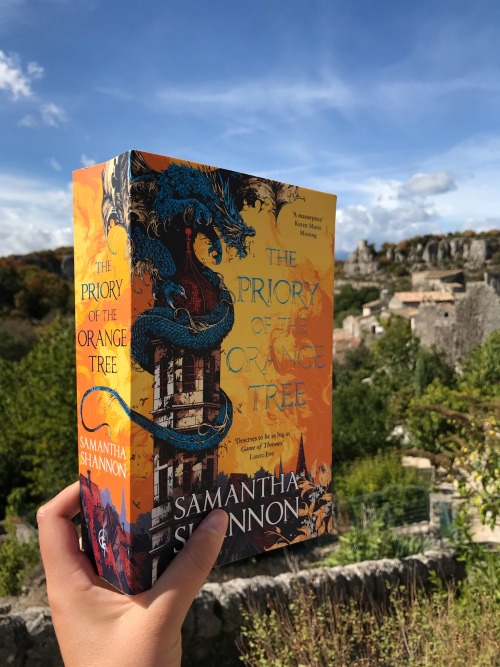 GIRLS OF STORM AND SHADOW BY NATASHA NGAN

Girls of Paper and Fire #2

Lei and Wren have escaped the palace and are now with the rebels. Their goal is to find as many allies as possible. Therefore they journey through the country, trying to win over leaders and their clans. But the king is always only a step behind them. Or before.
Wow, this was such an action packed second installment. Wren and Lei’s relationship develops, they all have to deal with the trauma of death and fighting and rape, they have to cope with their new situations. It was realistically and brutally written. I felt a lot.
⇒goodreads

THE PLACES I’VE CRIED IN PUBLIC BY HOLLY BOURNE

Reese and Amelie were in a relationship. But it wasn’t love, not really. Now, to deal with everything that happened, Amelie retraces all the places Reese made her cry in public.
This is no easy book. In the contrary, it’s hard and painful to read and I had to put it down from time to time because I couldn’t bear it. But it’s such a strong, real book that deals with emotional abuse and its consequences. It was kind of hopeful, but I also cried a lot. It is one of the most important books I’ve read this year.
⇒goodreads 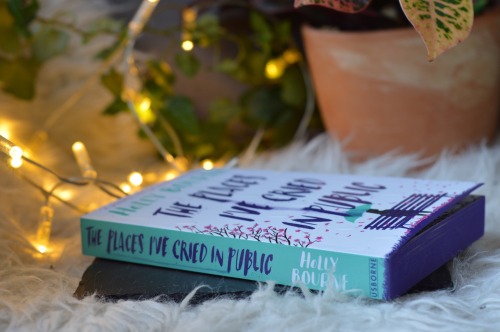 IF YOU COME SOFTLY BY JACQUELINE WOODSON

A white jewish girl falls in love with a black boy who’s new at her school. She learns that racism is a very real, very dangerous thing but is determined not to let it get between them and their relationship.
This book is so important, even though it’s over 20 years old. It feels very contemporary and very brutally talks about racism and the people being the victims of it. It talks about the good and bad and how (American) society is. I cried and was very, very angry because the bad stuff happening in this book? Nothing has changed.
⇒goodreads 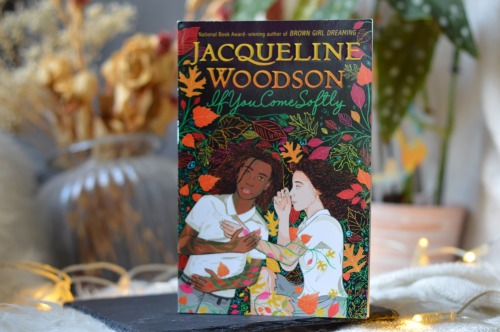 Ashish is a player. But after a girl breaks his heart, he wants to change something and lets his parents set him up. Sweetie is happy with herself and her body, but her mother constantly goes on about her weight. Even though she’s a track athlete. She wants to defy her mother and starts seeing Ashish.
This book is so full of body positivity and love. Sandhya Menon just knows how to write sweet, wonderful boys and Ashish is definitely no exception. And Sweetie is a force of nature, has a generally happy character and sees things usually very positive. The only thing she’s insecure about are some parts of her body but in this book she finds to herself and learns how to accept and stand up for yourself. I loved loved loved the romance in this and I the characters in general… gah, this book made me happy!
⇒goodreads

What books did you rate 5 stars last year? Do you have a favourite?