Hoohoo, guys! Today I bring you my review for Elysium Girls by Kate Pentecost, a book with a dust bowl setting, with witches and a deadly game! I originally was drawn to the book because of the cover, not knwoing much about it and I was so happy when my cousin gave it to me for my birthday! Continue reading to find out what I thought about Elysium Girls.

When Sal is named Successor to Mother Morevna, a powerful witch and leader of Elysium, she jumps at the chance to prove herself to the town. Ever since she was a kid, Sal has been plagued by false visions of rain, and though people think she’s a liar, she knows she’s a leader. Even the arrival of enigmatic outsider Asa-a human-obsessed demon in disguise-doesn’t shake her confidence in her ability. Until a terrible mistake results in both Sal and Asa’s exile into the Desert of Dust and Steel.
Face-to-face with a brutal, unforgiving landscape, Sal and Asa join a gang of girls headed by another Elysium exile-and young witch herself-Olivia Rosales. In order to atone for their mistake, they create a cavalry of magic powered, scrap metal horses to save Elysium from the coming apocalypse. But Sal, Asa, and Olivia must do more than simply tip the scales in Elysium’s favor-only by reinventing the rules can they beat the Life and Death at their own game. (goodreads) 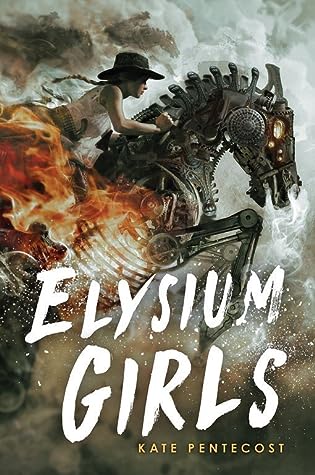 I have to admit, I have very mixed feelings about this book. On one hand, there was so much I loved, but then there was a lot that put me off and confused me.

Let’s start with the setting. I absolutely loved it! Elysium is a town somewhere in Oklahoma, ripped out of the real world and transformed into a game board. There is only dusty desert around with dangerous, magical inhabitants. It is the only safe place, if you can call a place in that world safe. The people are players in a game they don’t really know the rules to, they just trust in Mother Morevna, who is a powerful witch and leads the town on the path to goodness. Because after ten years, the game will end and if the people prove to be good and have acted according to the rules, Life wins and they will be saved. If not, Death wins.

The whole atmosphere was quite creepy. There’s Mother Morevna, seeing all from the church she lives in, the dusty, too hot town where people aren’t completely free of racism and prejudice even though they should be, the blackmarket, a sickness spreading. And all around that, desert and the ever impending doom of the game. I quite liked this atmosphere, the uncertainty of it all.

While I liked this setting, I was a bit confused with the world building. The story is set in 1944 but since Elysium was taken out of reality, that doesn’t really affect the story much. I couldn’t really understand why Elysium was picked, why people just went ahead with it and I wanted to know how the outside world reacted. I just don’t really understand the magic behind it at all. 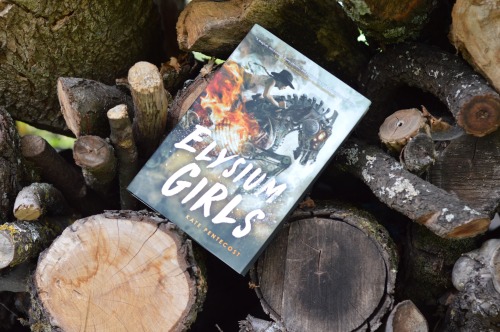 I liked the characters, even though they fell a bit flat and quite a few felt underdeveloped to me. Their arcs felt rushed, some information was just thrown in there to give more depth but it didn’t really make the characters that more complex. I also didn’t exactly buy the character development with most of them, especially Sal. She is seen by the townsfolk as shy and a bit weird. But to me she seemed brave and honest from the beginning, I couldn’t really see where she was shy or quiet. I still liked her, she was smart and strong  and followed her heart.
I liked Asa well enough, I could understand him and his motivations. What I couldn’t understand was the romance part. I suspected Sal might be sapphic, and I liked the very subtle romance plot for her, but I really didn’t like Asa’s romance. It was basically insta-love and felt somewhat forced and unrealistic.
I did love the friendships, though. I loved the group of girls and their dynamics, how each had their role and how hardened they were by their circumstances, yet how loving and warm on the other side.

One thing that really put me off was the German in it. I’m not sure if it’s just me, a German person, or not. But I don’t really understand why there was German at all. Because the one person who introduces the language was Russian. Or were they Russians living in Germany and going to the US? Well, I certainly don’t know and I was definitely confused. Especially when the one, super important German sentence was wrong. I don’t know who looked over the German parts of the text but ughhh “richtigsetzen” is not a German word, I’m sorry.

Overall, I enjoyed this book, even if it was mostly for the setting. The characters were okay and I liked them, but nothing more. I would definitely love to read more about this world and its strange magic.