The Inverts by Crystal Jeans | ARC-Review

Ad || I received this book from the publisher via NetGalley. This has no influence on my honest opinion.

Bettina and Bart have grown up as best friends, so surely they will end up together? After all, Bettina is young, rich, headstrong…. and gay. Bart is young, rich, charismatic… and also, definitely, gay. Any doubts are dispelled by, in short order: that ghastly kiss; a torrid encounter for Bettina in the school boiler-rooms; and an eye-opening Parisian visit for Bart.
Society will never stand for it. What else can they do but enter into a ‘lavender marriage’ and carry on indulging their true natures in secret? As the ’20s and’ 30s whizz past in a haze of cigarettes, champagne and casual sex, Bart and Bettina have no idea that they are hurtling, via Hollywood and Egypt, Paris and London, towards tragedy and bloodshed… 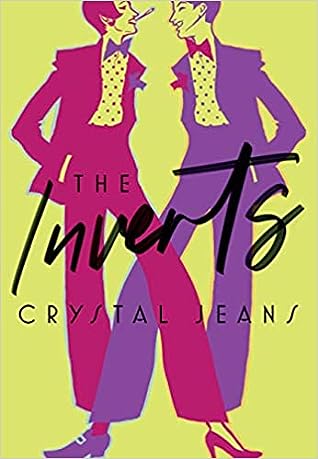 Ok, whew. Here we go, I guess. I was going into this book, hoping for a fun, dramatic read with serious undertones, I was expecting glitter and a bit of queer history. What I got instead was… something different. I’m not sure where to start, but I really did not like this book. I wanted to, but I unfortunately did not.

The thing is, I can like books even when the protagonists are unlikeable. Not in this case, though. The protagonists were horrible and to be honest, the side characters weren’t exactly better. Bettina is headstrong, always needs to be in the right and really petty. And she is a hypocrite. How to describe Bart, though? He really likes sex and sexual encounters in general. Bettina does, too, but I’m not sure how describe Bart other than either indifferent or aggressive and out for sex.Oh, did I mention they’re both quite superficial? And selfish?

I couldn’t really understand their friendship. They’re supposed to be best friends and while they do know each other really well, they are constantly fighting or making trouble or being angry at each other. They apparently have the same humor and find each other incredibly funny but for me, they were mostly just rude or annoying.

The protagonists are very sexually active. All. The. Time. Do they have any hobbies, really? Other than seeing a human being and wanting to sleep with them? And then, more often than not, actually sleeping with them? I don’t think so.
Their families weren’t better. Their mothers were both gossiping all the time, the fathers died at some point. The siblings, too. The lovers? Uhhhh. There was just depth missing.

I also really had problems with the pacing. There is this subplot that frames the main story set in the 1990s. It was off-putting and in my opinion, didn’t add anything to the story except confusion. I guess it’s supposed to make it more interesting, bring a murder mystery into it, but I just found it a bit unnecessary.

And I thought the book would be mostly set in the 20s and a bit the 30s, theose decades really “whizz” past, as it says in the synopsis. There are a lot of time leaps so that you suddenly get thrown into a complete situation than the one in the chapter before and it really put me off. Some things I’d like to have discussed in greater detail were just thrown under the rug, never to be mentioned again. I would have liked to see the characters deal with grief, for example. Or with their addictions. But they never do.

Then there’s the matter with genitals. And bodily fluids. Both were mentioned very often, sometimes at seemingly random points in the story. Sometimes in a sexual context, sometimes, as I said just completely random. And I really do not need vivid descriptions of bodily fluids and what they look like and taste like and… just, no.

I just felt very uncomfortable reading this book. I wish there would have been trigger warnings, because I had to put it down at several times or skip a few pages because I couldn’t deal with it. Please take the trigger warnings I gave above seriously.
But yes, I wasn’t a big fan of the book. Neither the plot nor the characters could really capture me. It made me feel slightly sick and uncomfortable. I wish I could say something positive but I really can’t. There was jsut too much going on there, the ever present fatphobia, the various drugs, homophobia, … I don’t even know where to start and stop.