If I was in Hogwarts: my life in the wizarding world

so this is something which Mos Zeilenherz originally thought of. It’s basically how I would imagine my life in Hogwarts to be. And as you probably know, I can never resist Harry Potter, I just love it too much. It’s not the first time I’m thinking about all this, though most of it is written down in some stupid fanfiction with my best friend. *coughs* Anyways, I thought this was really cool and I translated the categories (and added some more) from German into English. If you want to check out the original posts, you can find them here and here. 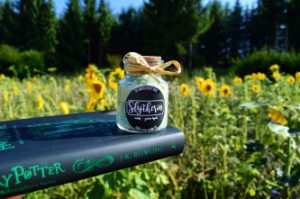 Definitely Slytherin. I could surely be in Hufflepuff as well, but my heart is definitely green and silver. No wonder that my Pottermore house test said Slytherin thrice (yeah, I forgot my usernames and passwords, oops). Actually, I believe I’m a perfect mixture of Hufflepuff and Slytherin, but I cannot imagine not being in Slytherin.

Definitely Minerva McGonagall aka Badass McBadass. Though she can be strict, she is always just and fair. She actually cares about her students and what happens to them. Also, she is a brilliant, strong witch. Apart from her, I’m pretty sure I would have loved Neville Longbottom as a professor. Can you believe how nice he would be, how helpful and caring?
As for favourite subject, I’m going with Astronomy and Herbology. I love space and I love plants, so that is a clear thing for me.

Ah yes, the most important fanfiction topic. Thanks to one fanfic I’ve read some years ago, I have a thing for Marcus Flint now. I hated him in the books and films but I can’t help it. Thanks, person who wrote that stupid (very good!) fic. But if I would fall in love with him canon-wise? I do not know. Probably not. Aside from Flint I’ve always been a Fred Weasley girl.

Hopefully one of the two named above. Depending on who it is, I’d pick my dress, though. With Flint I’d pick something more high fashion, probably a bit scandalous and most definitely black with dark red lipstick. But for Fred I’d pick something frilly, something with a lot of colours and a twirling skirt.

Obviously, the library. I mean, books? Hello? What more could I want. But I think I would also enjoy the astronomy tower, high up with a good look over all of Hogwarts. Probably sitting there reading a book would be nice. But another place would be the Room of Requirement. A place that is always what I need it to be is probably just the room I need, for being alone as well as… I don’t know, having a party or something.

An owl! Definitely an owl! I don’t care what kind of owl, but an owl! So handy, also very cool, aesthetic creatures. And I could ask them deep questions…

I’d be the first to cheer for my house but that’s about it. I’m more of a single player, I don’t like team sports. Watching them is pretty cool though. But if I had to play, I’d pick being a beater.

Pre-school year shopping in Diagon Alley, where do I go. Flourish & Blotts, of course. Not without my books. Then I’d visit Weasley’s Wizard Wheezes. I mean, who doesn’t need some jokes and fun?

And on a Hogsmeade weekend? I’d probably sit in the Three Broomsticks and eat and drink all day. Of course after I visited Honeydukes to get all the sweets.

I’m actually very content with what Pottermore gave me. I think it is also very fitting. It’s a 13″ Sycamore wood wand with a phoenix feather core. Funfact: I’m a huge nerd for ancient Egypt and the sycamore is one of the few trees native to Egypt. Another fun fact: The phoenix is thought to be native to Egypt as well. Not as the mythological being. But apparently there was a translating mistake made and someone just said “that’s a phoenix” and since them some kind of bird living in Egypt is a phoenix. So yeah, I’ll keep my Pottermore wand.

Nope, not going with Pottermore this time. Although I’m okay with the chow dog it chose for me. But I’d have a seal, pretty sure. Not only are they my favourite animals, but they can be cute and cuddly and a bit stupid, but they are also predators.

Now that is a question my best friend and I have discussed in many, many fanfictions. What would we do after our time in Hogwarts? If I didn’t hate team sports as much as I do, a career in Quidditch would be awesome. Why do wizards not have badminton? But I’d also love to teach at Hogwarts, preferably astronomy.

Out of the legal ones, I’d pick a broom. It’s slow, but at least I don’t have to hop into fire. But I would probably smuggle a flying carpet into the country and use that one. Because let’s be real, a carpet is much more comfortable than a broom.