Rule of Wolves is the second book in the Nikolai Duology, the third series set in Leigh Bardugo’s Grishaverse. That universe is one of my all time favourites, I’ve loved it ever since I started reading Shadow and Bone. Read on to find out what I thought of the latest installment.

The Demon King. As Fjerda’s massive army prepares to invade, Nikolai Lantsov will summon every bit of his ingenuity and charm—and even the monster within—to win this fight. But a dark threat looms that cannot be defeated by a young king’s gift for the impossible.
The Stormwitch. Zoya Nazyalensky has lost too much to war. She saw her mentor die and her worst enemy resurrected, and she refuses to bury another friend. Now duty demands she embrace her powers to become the weapon her country needs. No matter the cost.
The Queen of Mourning. Deep undercover, Nina Zenik risks discovery and death as she wages war on Fjerda from inside its capital. But her desire for revenge may cost her country its chance at freedom and Nina the chance to heal her grieving heart.
King. General. Spy. Together they must find a way to forge a future in the darkness. Or watch a nation fall. (goodreads) 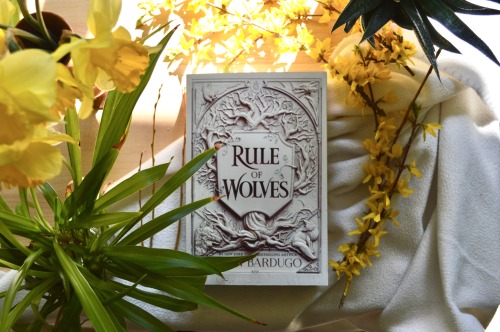 Ok, ok. I’ll try to make this as much non-rambling as possible but with the Grishaverse, I can guarantee for nothing. Because I love it and I love talking about it and sometimes my love just comes out of me without sense. And believe me, I loved this book. Surprisingly I did because I didn’t like King of Scars, book 1, that much. But I really, really enjoyed Rule of Wolves. And please turn around if you haven’t read the book yet because I decided to include spoilers.

Let’s start with the characters. Hear my endless “AAAHHHHH” because that happens when I think of them. I’m repeating myself but I LOVE THEM YOUR HONOR. Listen, I liked Nikolai from the very start when he first showed up in the Grisha Trilogy. He is a very likeable character, smart and witty, charming and caring and can make the impossible possible. I’d trust him with my life. I also want him to be my best friend. And while he doesn’t develop much, he still grows… wiser? His decisions weigh more now that he is king and he knows it and while he seemingly doesn’t act like it, he cares so much about Ravka, his country. 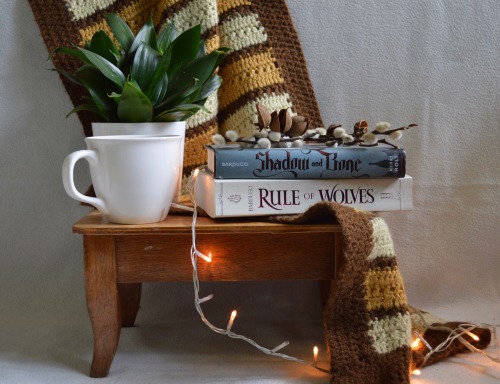 I haven’t had the best start with Zoya. I didn’t like her much when I made my first trip to the Grishaverse and I still wasn’t 100% sure about my feelings for her when reading King of Scars. But I have to admit she really, really grew on me in Rule of Wolves. She has a great character arc! While she changes a bit and opens up and thinks like the general she is, she is always staying true to the self she feels she is, she accepts who she was born as and who that makes her and her finding that path was wonderful.

I enjoyed immensely how the relationship between the two of them develops, how they’re friends, leaders, fighters and tentative lovers all at once. It seemed very realistic; the doubts they had, the feelings they can’t deny, the acceptance and understanding they have for each other.

In this book, I also enjoyed Nina‘s chapters more again. They were my least favourite in King of Scars, but I really liked them in this one. The story up north developed really well and finally came together better with the rest of the plot. It didn’t seem as separated anymore. 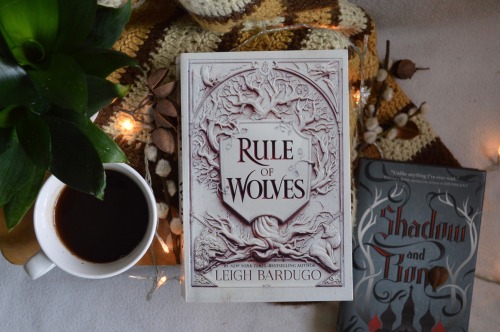 The supporting characters were amazing as always. I just love them so, so much. All of their qualities, their different characteristics and how they come together as friends and make a family. I just need to get something off my chest: HAS GENYA NOT SUFFERED ENOUGH ALREADY????? Now, let’s continue.

And how about we continue with the one character I love like no other? Yes, it’s The Darkling. Who has come back in the end of King of Scars which had me screeching, crying and laughing. All at the same time. While I kind of like his role, I’m not entirely sure how much. It didn’t seem completely logical to me. And also very small. I’m not saying that because I’d read 500 books about him and only him, but because he was THE feared character in the Grisha trilogy and then when he came back, everyone was really afraid but then… he did nothing, really? He tried to but then he left the doing part to someone else and just barged in from time to time to save the moment in favour of Nikolai and his friends. And then at the end he decides to sacrifice himself to save the entire world even though he will suffer forever and ever? WHAT? WHAT?

Whew. Big breath. As I said earlier, I liked how Nikolai’s, Zoya’s and Nina’s stories come together. It finally all made sense and I have to say I enjoyed the fighting scenes immensely. And I loved all the details! I talked about this with Anna @ rattletheshelves already but the technical aspect and the development of the world through technology and trade was really fun to read! Also, I really need to mention the politics as well! I always love reading about politics in books! And also things like street names and parks that just made the world more complex, more real.

And a special mention has to go out to some very special characters who come back to make an appearance again. And after that ending… I have a feeling this won’t have been the last time we’ll read about them.

I’d definitely say this was a highly enjoyable book and a great finale for this duology! It won’t become my favourite book in the Grishaverse but rest assured that I stayed up until 5:30am to finish the book because I really, really couldn’t get myself to stop.