NOTE: This is the second book in a trilogy so there will likely be spoilers for the first book in the synopsis and this review!

Nahri’s life changed forever the moment she accidentally summoned Dara, a formidable, mysterious djinn, during one of her schemes. Whisked from her home in Cairo, she was thrust into the dazzling royal court of Daevabad and quickly discovered she would need all her grifter instincts to survive there.
Now, with Daevabad entrenched in the dark aftermath of the battle that saw Dara slain at Prince Ali’s hand, Nahri must forge a new path for herself, without the protection of the guardian who stole her heart or the counsel of the prince she considered a friend. But even as she embraces her heritage and the power it holds, she knows she’s been trapped in a gilded cage, watched by a king who rules from the throne that once belonged to her familyand one misstep will doom her tribe.
Meanwhile, Ali has been exiled for daring to defy his father. Hunted by assassins, adrift on the unforgiving copper sands of his ancestral land, he is forced to rely on the frightening abilities the marid, the unpredictable water spirits, have gifted him. But in doing so, he threatens to unearth a terrible secret his family has long kept buried.
And as a new century approaches and the djinn gather within Daevabad’s towering brass walls for celebrations, a threat brews unseen in the desolate north. It’s a force that would bring a storm of fire straight to the city’s gates . . . and one that seeks the aid of a warrior trapped between worlds, torn between a violent duty he can never escape and a peace he fears he will never deserve. (goodreads) 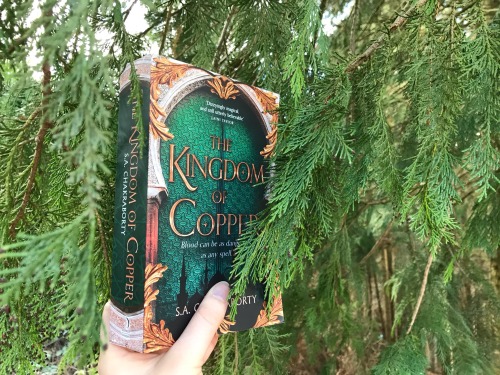 What! A! Brilliant! Sequel! Wow, just wow. I’m a bit blown away to be honest. So much happened. I got some answers but I have so many more questions. I’m in love with this world and this is probably just going to be a very rambl-y review because I cannot put my thoughts and feelings into actual understandable words. That means if I don’t make sense, just be informed that I enjoyed this books a lot lot lot.

As my friend told me: “Oh, how the turns have tabled.” They so have! I’m probably one of the very few people who didn’t like Ali in the first book, City of Brass. I mean I went from not liking him much to him being one of my favourite characters in this trilogy. Believe me when I say I was shocked. Shocked! But alas, it’s the truth and I fell a bit in love with Ali, with his selfless, caring being. He’s so good while still having flaws. His heart sits in the right place but he’s often impulsive which gets him into bad situations. I just want to give him a cup of tea and let him rest. The poor boy, there’s so much he went through and it’s not enough, he needs to SLEEP.

I again loved Nahri very much. She’s learned about herself and her family and uses that knowledge. While she looks out for herself and her tribe mostly, she also cares a lot about her friends and tries to do what’s right. She’s not as rash as Ali, she’s more thoughtful and carefully plans what she wants to do, unless she’s being provoked, then beware of her sharp wit and sharper tongue. Nahri knows how to survive and does so by any means necessary.

There’s another character who just needs to rest. And by rest I don’t mean going to bed and have a good nap but to go to eternal sleep. Let him stay dead, stop abusing Dara‘s abilities to get to your own goals, please and thank you. Give him the peace he deserves! I felt so sorry for Dara, at times got annoyed. I understand why he acts the way he does, why he has to act that way and what drives him forward. But sometimes I just wanted to bang his bow on his head and put some more sense and especially patience into him. Oh my god, this guy is not patient at all. Also, let him sleep.

I have conflicted feelings towards most of the other characters. I loved Jamshid and Zaynab, but everyone else does so much bad stuff just to do one thing that’s so good and makes me rethink my opinion about their characters. I mean the king can go to hell, but the rest? I’m not sure yet! And that’s what I love about all of these incredibly well written characters: they are so complex. Every single one of them. They all have secrets and opinions, they all love and dislike, they all have their own goals and they make deals and compromises. Every character feels super real and I’m excited to see who goes down which paths and where these paths will take them. 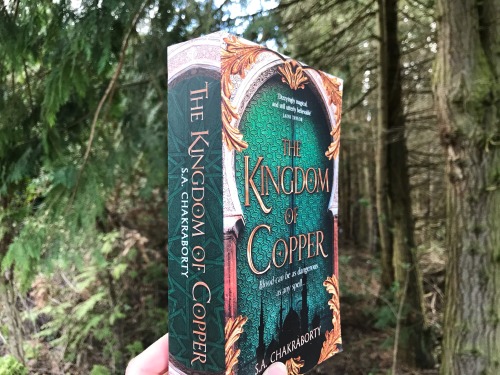 Amazing! Wonderful! So good! I am so totally in love with the world; with the magical beings and how their society (or: societies) work. I loved the political and economical aspects and the different specialties of the different tribes. There is such a complex magical history mixed with actual history. It is a lot you can discover, every little detail plays its part in creating a unique atmosphere. Bustling markets, unforgiving deserts, snowy mountains. Royals, worker guilds, healthcare. Everything mixed with magic, with corruption and with people just trying to do what’s best. The Daevabad Trilogy has such an incredibly rich world.

I liked City of Brass but this one? It was such a step up from the first book. It had everything I wanted in a book: an amazing plot, well written characters with great development and wonderful world building. I enjoyed it so much and I can’t recommend these books enough. I’m more than excited for the third book, The Empire of Gold. June cannot come soon enough!