With Dagger and Song | ARC-Review

*Note: I received a copy of this book from the author in exchange for an honest review*

The second book in the Curse of the Cyren Queen series brings Roh and her her companions out of the Lair and into the world outside. After loving the first book, A Lair of Bones (review), I was super excited to read With Dagger and Song and had quite high expectations. Could the book meet them?

An empty crown. A perilous journey.
Will she answer when darkness calls?
Against all odds, Roh survived the harrowing Queen’s Tournament, but now something far deadlier awaits her: a formidable quest for the three magic birthstones of Saddoriel.
The gems have been scattered across the realms – and only when Roh retrieves them can she take her place as queen. But surrounded by hostile companions and tormented by the dangerous secret she carries, Roh begins to realise that the pursuit of power may prove more destructive than she ever imagined.
Nothing can prepare her for the nightmares that fester in the shadows of Akoris, a fanatical cyren territory, or the twisted games of its cunning leader…
Can Roh win the first birthstone without sacrificing everything she holds dear – and without losing herself? (goodreads) 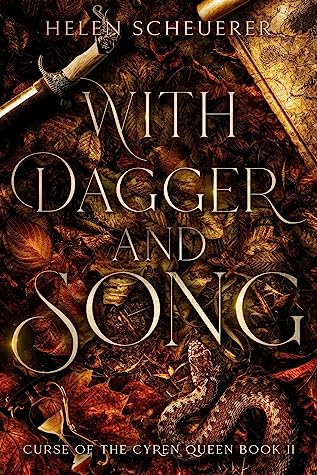 I have to admit I needed a few pages to get back into the story but as soon as I found my reading flow, the book basically read itself. I flew through it, loving every moment, eyes glued to the words. While I loved the first book already, I liked this one even more! Everything I didn’t enjoy about A Lair of Bones was gone here.

In my opinion, The Curse of the Cyren Queen manages to find the perfect compromise between a plot full of action and happenings, and focus on the characters and their development. I love that there is a lot of action, a lot of events and secrets to uncover that the reader gets to learn about alongside the characters. But then there are the conversations between friends and allies and foes, each one adding something new to the story and somehow managing to make me root for characters I didn’t think I could like.

But here I am. Still not entirely sure about that one character but suddenly loving them! That character really took a turn I did not expect but I’m here for it. I’m also here for the wonderful portrayals of friendship and how much love there is to be found in friends. But the story also shows that friendships aren’t unbreakable, that they can break. I loved how the different emotions were described, how they made me feel with the characters and especially with Roh.

Roh still might be one of my favourite protagonists. She isn’t exactly a reliable narrator, but definitely one that lets the reader glimpse into her inner workings and to her core. Roh is often insecure, but she also knows herself quite well, knows her strengths and weaknesses. She can admit when she’s in the wrong, she can admit when she needs help and while reluctantly, accepts it. I really enjoyed her inner monologues because that gave me a chance to recap all that happens in the story along with her.
I also enjoyed reading about the other characters a lot and how they change and develop, especially in Roh’s eyes.

While characters are always what make or break a book for me, I absolutely enjoyed the plot as well, I liked the drama and the action and the gentler scenes and how they were interwoven with each other and made for a good pacing. I loved seeing the cyrens’ world outside of the Lair and how the societies are different from each other, but all connected.

In conclusion, I loved With Dagger and Song. A lot. There is nothing more to say. If you like secrets and magic and morally grey characters, then I’d recommend The Curse of the Cyren Queen with my whole heart!