[ARC-Book Review] Beneath the Citadel by Destiny Soria

The city of Eldra has been ruled by prophecies, spoken by seers. But now Eldra is controlled by the council. Many people are unhappy and rebel against the council, but the rebellion gets a bloody end. Years later, the daughter of the most famous rebels, Cassa, puts together an own team to move against the council. What she doesn’t expect to find are secrets upon secrets and to solve them, she has to do what she has always done: what she thinks is right.

Many thanks to the publisher for providing me with an ARC of this book. This will not have influence on my opinion.

First off, this was definitely one of my favourite reads this year and I shall now explain why.
First, I loved the cast of characters. They’re all very different, with different talents that add up with each other very nice. The story is mostly told from the POV of one of the five main characters, with some chapters told by others.
The character in the centre of the story is Cassa. Her parents were rebels and after they were killed, she became the new generation of rebels. And she is one through and through. It is basically what defines her and also how she defines herself. She is independent and focused on her goals. Though she seems not to care, she does indeed.
Then there’s her best friend who is also a traitor, Vesper. She is niece to the chancellor, the head of the council. She is extremely smart and good at planning things. She knows what it takes to survive, but she usually acts for the greater good.
Then we have Alys. She is asexual, and very clever. She is trainig in her parents’ pharmacy and never shuts up when she has something to get off her chest. She suffers from panic attacks. Alys is also very protective of her brother, Evander, who is much the opposite of his sister. He is loud and talkative, where she is calm. But he too doesn’t hold back his opinions. He is very loyal and protective of his loved ones and basically I just really love this bisexual dork a lot. 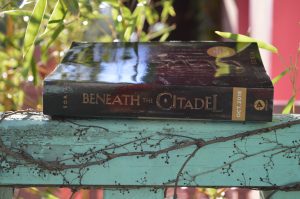 The last in the group is Newt. He is quiet and often holds back. He has been in love with Evander for quite a while, but never lets it show. He is also low and takes a lot of the shitty jobs.

And this is the group who sets out to take down the council. But it’s not so easy because everyone they encounter seems to have secrets. They are put between two fronts and have to make a decision, where every outcome is worse than the others. This makes up for a really interesting plot because like the characters, the reader can never really be sure where the story is going, who is the real villain. Even though it was quite slow at some parts, especially in the beginning, I thought this really fit the whole setting and helped drawing up the characters. I also enjoyed the magic system that is part alchemy and part clairvoyant powers and the two interacting.

This book was mind-twistingly good and I loved every page of it.