[ARC-Review] WE HUNT THE FLAME BY HAFSAH FAIZAL | Werbung/Ad

Today I have a very special review for you. I have been looking forward to reading this book for quite a while now and I am really lucky to have received an early copy of We Hunt The Flame. It is one of my most anticipated releases this year. And wow, it definitely lived up to my expectations.

Zafira is the Hunter, disguising herself as a man when she braves the cursed forest of the Arz to feed her people. Nasir is the Prince of Death, assassinating those foolish enough to defy his autocratic father, the king. If Zafira was exposed as a girl, all of her achievements would be rejected; if Nasir displayed his compassion, his father would punish him in the most brutal of ways.
Both are legends in the kingdom of Arawiya—but neither wants to be.
War is brewing, and the Arz sweeps closer with each passing day, engulfing the land in shadow. When Zafira embarks on a quest to uncover a lost artifact that can restore magic to her suffering world and stop the Arz, Nasir is sent by the king on a similar mission: retrieve the artifact and kill the Hunter. But an ancient evil stirs as their journey unfolds—and the prize they seek may pose a threat greater than either can imagine. (Source: Goodreads) 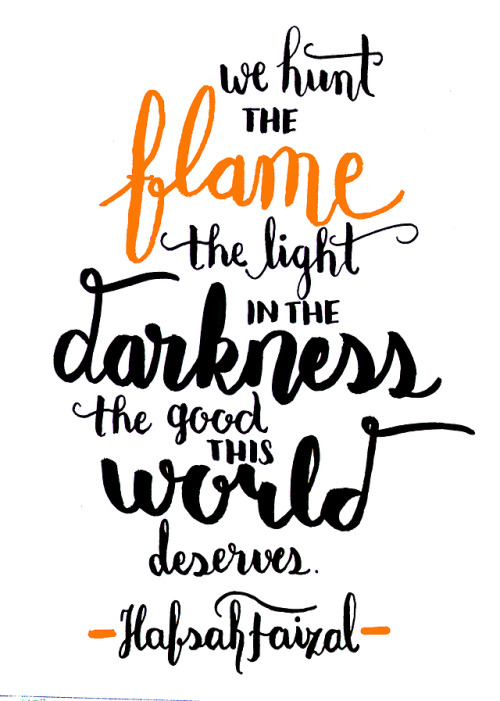 So the thing is: I love this book to pieces and I read it in almost two sitting, which both ended at 5am and left me very jittery and excited and with many ideas for lettering and art. You’re probably wondering by now why I enjoyed this so much and I don’t want to let you wait any longer.

First of all, I adored the setting. The story takes place in Arawiya, a kingdom inspired by ancient Arabia. Plus magic. There are five caliphates which are each unique and are known for their specialties. The caliphates are in danger of being overcome by the magical forest Arz, an impenetrable mass of trees. The forest spreads from the island of Sharr that has been used as a prison for evil beings in the past. I really enjoyed this world because it brings together all that is good with different evils you can’t really see at first but that are there nevertheless.

What made the setting even better was the writing. It was so beautiful, sometimes even a bit prosaic. It was detailed and descriptive. I could see Arawiya perfectly before me, I could smell it and could imagine being there with the characters. The pace of the book was quite slow at some points but in my opinion, this only added to the beauty of the story and its narrators.

Oh, and those characters! There are the main characters, Zafira and Nasir who narrate the story as well. Zafira is a hunter whose caliphate is cursed with endless snow. She is the only person known to return from the Arz with her mind and body intact. Zafira hunts to feed the people in her village. She usually keeps to herself or people who are very close to her. She is fierce and righteous and wants to help people. She fights for what she thinks is right, but she also has much to learn. Which she gladly does. She’s smart and knows herself quite well. Zafira is quite sarcastic and doesn’t take shit from anyone.
Nasir is one of those bad guys who are actually super nice and have a good heart. And even though he is an assassin, he not actually bad either. He isn’t much of a talker either and tries not to let other people too close. Nasir doesn’t often show his sense of humor, but when he does it’s always a snarky comeback that made me laugh so much. The two of them together is basically a “I hate you but like you and here, have some sarcasm”-battle and I love it. They come from two very different backgrounds but they just fit together really well. 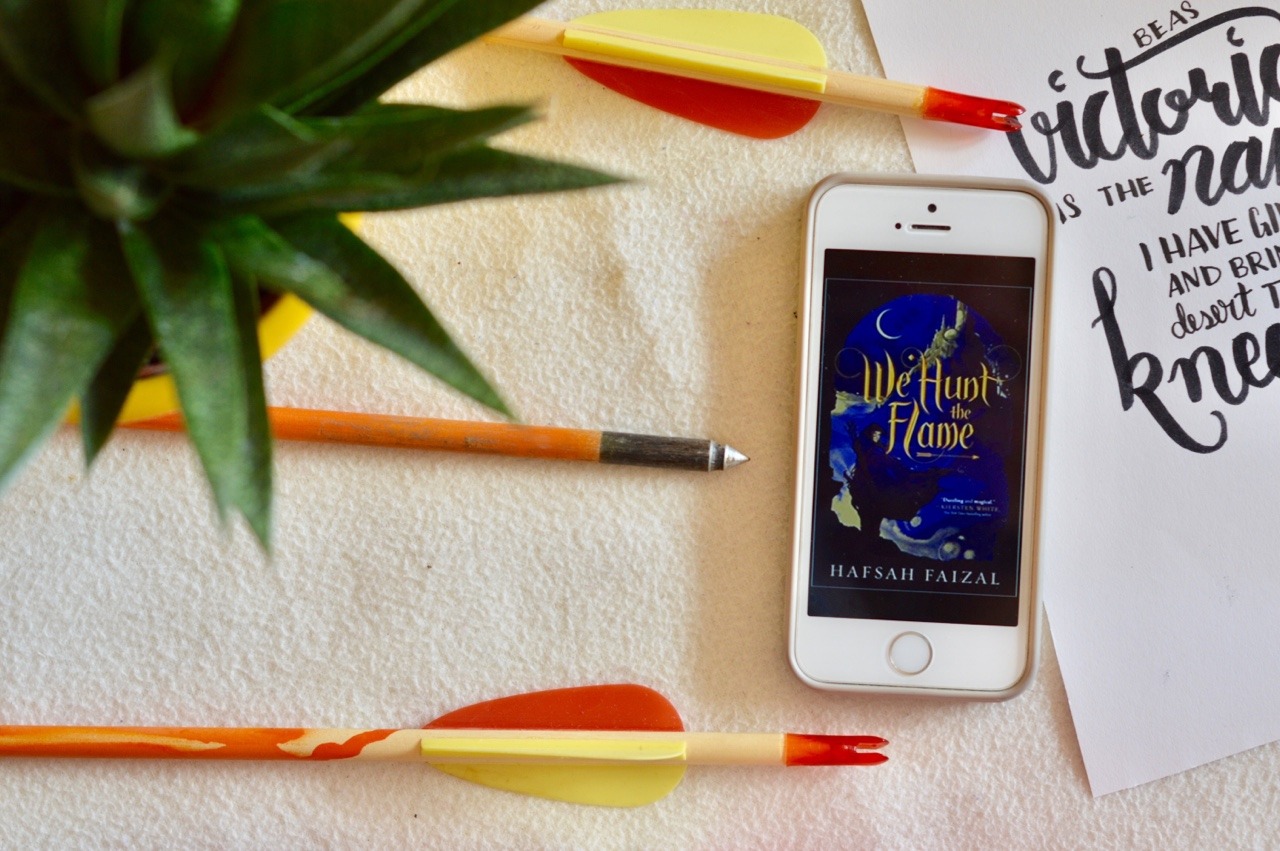 The secondary characters each are amazing as well. Kifah is an elite warrior with a great sense of humor. She has a sharp mind and a spear just as sharp and she definitely knows how to use both of them. Benyamin is basically a mother hen. He keeps the group together with his calm. He balances out the heated temperaments of the others. The fifth member of their group is Altair who likes talking way too much and flirts with everything in his way. To be honest, he could probably charm one of the palms they’ve encountered. He definitely charmed me with his easy, fun character. He lightens situations easily but can also be serious if necessary (which isn’t too often, apparently). Altair is my favourite character in this series and I love him.
Apart from the group, there’s also Yasmine, Zafira’s best friend from home who I hope to see more of. She’s just as fierce as Zafira, but in another way.

Another important character is the villain. They are definitely a villain exactly to my liking. It was like I thought “please give me a villain like that again” and Hafsah heard it.

In conclusion, I am very much in love with this book and the problem of ARCs is, that I have to wait even longer for book two. I laughed a lot but I also had my eyes glued to the pages because I had a physical need to read and continue this story. It was so good from start to finish, ancient Arabia plus magic is a perfect combination, especially with such a great cast of characters! What a wonderful book! 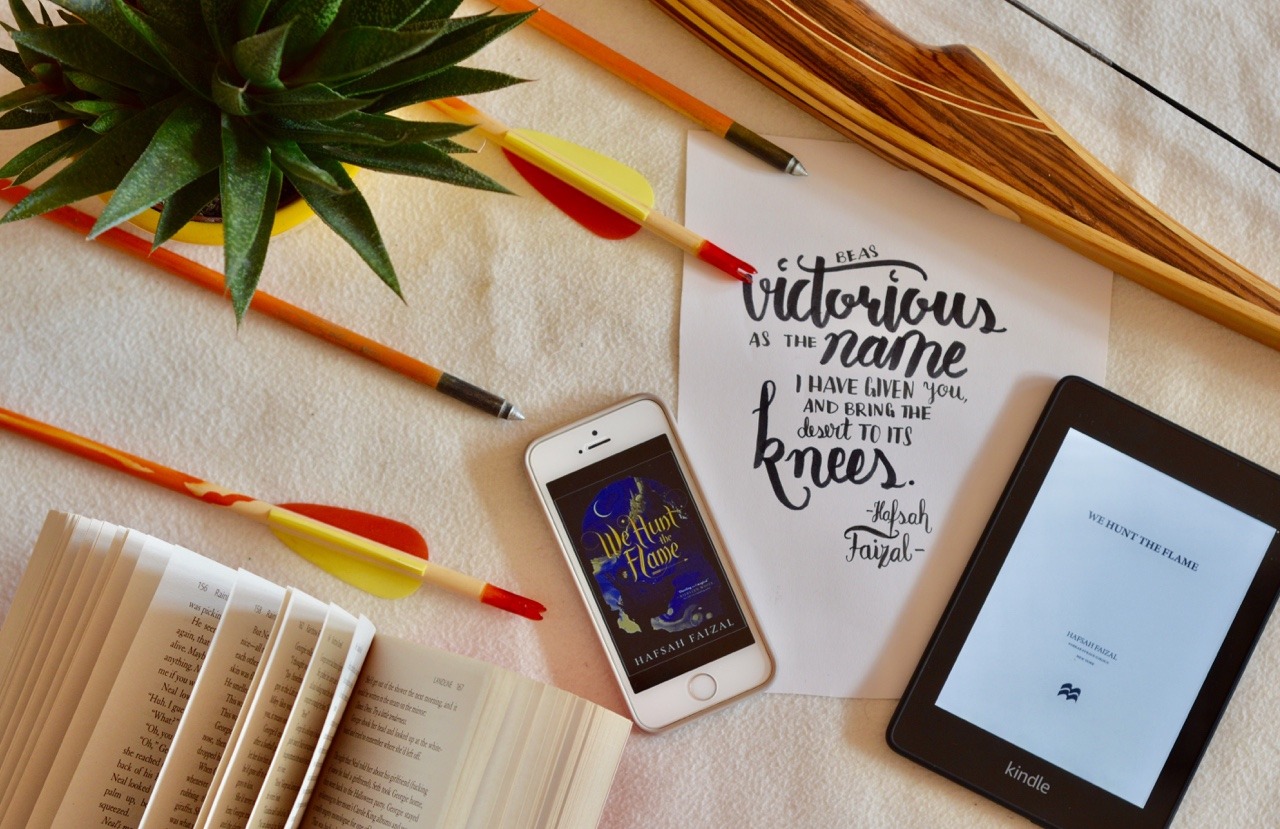