I received this book for free in exchange for an honest review from the publisher via NetGalley.

Adopting a cat doesn’t sound hard. Then Jericho Adams meets Harinder Mangal, the surly pet store employee who loves animals and hates customers. Their first encounter inspires more than simple loathing—it puts the ball in motion for an absurd game of deceit that boasts a fluffy cat named Dumpling as the prize.
Harinder hates Jericho’s attitude, especially when it comes to owning a pet. He attempts to chase the other man from his store and is shocked when Jericho overcomes every obstacle, no matter how bizarre. Not only that, but he generates some of his own wild inconveniences that leave Harinder seething in his ugly sweater and mom jeans.
Before either man can get the other to crack, Harinder finds himself unexpectedly homeless. Despite their mutual antagonism, Jericho invites Harinder to crash at his place. The increased proximity makes it difficult for Harinder and Jericho to maintain their respective ruses, not to mention stopping themselves from actually caring about their pet-parenting rival. (goodreads) 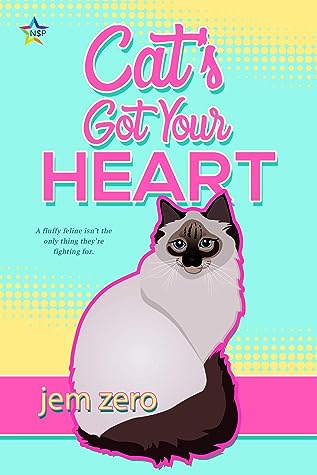 I’m soft. So soft. This book made my insides gooey and melt and my heart so soft.

I have to admit I had some trouble getting into the story during the first few chapters because both of the main characters are unnecessarily rude. Don’t get me wrong, I understand where it’s coming from, but it was a bit exhausting to read. I love enemies being rude and snarky with each other but this seemed like a bit too much. I immediately took a liking to Jericho. All he wants is to remedy a mistake he made and get his sister a new cat. Harinder likes animals more than people and just wants to give them to a loving home. I do understand his motivation and it doesn’t seem to affect his business but he is just plain rude and at first I found him to be somewhat annoying. But he soon grew on me as well, the way he acts with “hopeless cases”, how he takes care of the animals in the shop, it was just sweet.

And luckily, Jericho is not a person to give up easily and so they start playing a game of being rude back and forth, both getting more and more difficult while simultaneously getting to know each other better. I got really invested in their tentative feelings for each other, how dislike turned into friendship and eventually something more. But both can’t talk about it, they’re both so awkward and have gone through a lot of shit and have problems to trust themselves and each other but oh, they have such a beautiful development. Both for themselves and their relationship. Even though they throw insults at each other’s head all the time, it turns from real to affectionate and I know I’ve already said it twice, but I have to say it again: I was so soft! The two of them were so soft.

What I enjoyed was the missing drama. And by this I mean, the story didn’t follow the “they fall in love – drama – happy end” scheme, it was chaotic dramatic in every chapter and I loved it. I was waiting for that drama, hoping it wouldn’t come and my hopes were heard. I also really liked how sex and consent was discussed. This story is very sex positive and I loved seeing the characters asking for consent and being patient and understanding with each other.

One of the main characters is trans and I think it was really well written as well. I myself can of course only speak as a cis person, but I still think it was handled really well.

To conclude this: this book was as fluffy as the Dumpling the cat. It was wonderful and soft (Ha!) and made me smile a lot. I enjoyed this book a lot. A lot a lot!