WERBUNG/AD
I received this book from the publisher in exchange for an honest review.

For Penny Lee high school was a total nonevent. Her friends were okay, her grades were fine, and while she somehow managed to land a boyfriend, he doesn’t actually know anything about her. When Penny heads to college in Austin, Texas, to learn how to become a writer, it’s seventy-nine miles and a zillion light years away from everything she can’t wait to leave behind.
Sam’s stuck. Literally, figuratively, emotionally, financially. He works at a café and sleeps there too, on a mattress on the floor of an empty storage room upstairs. He knows that this is the god-awful chapter of his life that will serve as inspiration for when he’s a famous movie director but right this second the seventeen bucks in his checking account and his dying laptop are really testing him.
When Sam and Penny cross paths it’s less meet-cute and more a collision of unbearable awkwardness. Still, they swap numbers and stay in touch—via text—and soon become digitally inseparable, sharing their deepest anxieties and secret dreams without the humiliating weirdness of having to see each other. (goodreads) 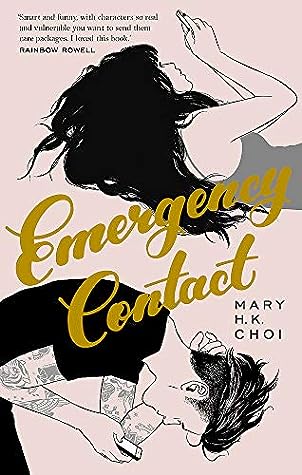 Now, this book was something. I had some mixed feelings, but after a few days of thinking about it and wrapping things up in my mind, I think this was a really, really good book.

Emergency contact follows to main characters, Sam and Penny. I liked both of them from the beginning. Penny is kind of a loner and most people think she’s weird. She has been through a lot, doesn’t like people too much and has a hard time talking about what’s going on inside her. Sam also had a hard life living with his alcoholic mother, a manipulative girlfriend and big dreams. His looks might scream bad boy, but he’s actually the softest boy. The two of them meet through Penny’s roommate, Jude, who is also Sam’s niece. They grow closer after Sam has an anxiety attack and Penny helps him. They don’t tell anyone, basically living inside each other’s phones. It was interesting to read those conversations that showed glimpses of their characters and feelings and their lives the reader doesn’t get to see otherwise. They’re deep, but also funny and informative. They give each other a lot to think about but made me think as well. Penny and Sam soon share a deep bond without ever really seeing each other. That would make things awkward, right?
I liked their development, both their personal ones and their relationship (up until the romance point?). They both find themselves, they grow and learn together. The problem was that I absolutely loved their friendship. If it was up to me, I wouldn’t have put in a romance because Penny and Sam work even better as friends.

The side characters were also pretty cool. They all had very different traits. They felt interesting and real, each having their own goals and motivations. Everyone in this book is very flawed and most characters are super unlikeable (but I liked them anyways).

It wasn’t always easy to read Emergency contact. Some of the topics it discusses are really heavy. The book shows what things can destroy a person or a whole family and how each individual deals with it. It mentions the effects things like rape, poverty or toxic love can have on people. The story also tackles sexism and racism. I more than once either wanted to slap the characters or slap sense into them.

I just… I am at that point again: how do I put feelings into words? Because overall I enjoyed this book, it made me feel so much. But on the other hand it made me feeling weird and a bit angry.  Don’t let the pretty, kind of happy cover fool you. Emergency contact is not a happy story. It’s dark and heavy and harsh, but it’s also hopeful and gives you a lot to think about.