As if waking up in an unfamiliar world isn’t enough of a surprise, Ember gains a new title to her name. Savior.
Hunted by the Crescent Prince and his lethal shadows, she accepts a young Mage’s help to navigate the land of blood magic and its many illusions. But where Ada sees the good in her power, Ember discovers something else.
An icy darkness, designed to take lives, not save them.
The only thing worse than not being able to rely on her senses—or the reality she had once believed to be true—is knowing that she cannot trust her heart. Especially as it seems to draw her to the one person in whose hands she can never fall…
Will Ember escape the thrall of darkness or will she reign in it?

I received this book from the publisher via NetGalley in exchange for an honest review. Thank you!

To be honest, I had quite the problems with this book. I just checked Goodreads and I started this book in the beginning of October! And I needed ages for the first third. I just couldn’t get into the book. There are several reasons for that, but let me tell you first, that I picked Evenfall back up a few days ago and somehow found my way into it, very easily so. I can’t even say why, but the story finally clicked with me and I read the rest of the book in a matter of hours. 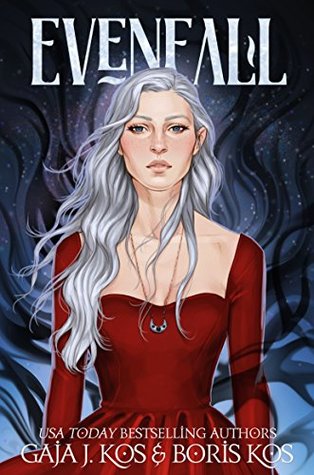 My main problem with Evenfall was the main character, Ember. I’m still not really sure how to characterize her. What do I know about Ember and her motives? That’s a good question. She’s a fast learner and quite brave, but apart from that? Mhhh. You know how they say “show, don’t tell”? Well, Evenfall told me a lot, but didn’t really show me. For example, Ember is always described as being smart and that her only weapon is her sharp mind. It is also often said, that her sharp mind doesn’t seem to be sharp right now because of reason XYZ. But I only saw her not using her mind? I mean, at the beginning of the book she strands in this world foreign to her and this girl shows up and tells her she’s been waiting for her. And Ember just runs away. But Ada, the girl, finds her and after a minimal amount of talking Ember trusts her and seems to call her friend already and follows her around like a puppy. Ember doesn’t really do anything for herself, she just follows other people (mainly Ada) around and adapts to their plans. Later in the book she realized that though and starts to change. Did I say starts to change? I guess that is not entirely true because she doesn’t start, but has a moment of realization and just changes from one second to the other.

Ember starts accepting herself and her powers all of a sudden. Powers she just got the knowledge of but instantly knows how to wield? And other powers she knows slmuber inside her she has to learn anew because she forgot how to use them? I just found the entire transformation to be not entirely plausible. Everything just went to fast from that realization point on, and before it was to slow.

I really liked the Crescent Prince, though. He is one of those characters whose description makes me instantly like them. Sorry, but I’m weak when it comes to the pale guys wearing only black clothes and are cold but actually have something nice inside them. And when I say weak, I mean “holy shit I love him already”. Anyways, he was probably the best written character in the story. I understood him and his motives best.

As for the other characters… I don’t know. There’s Ada, who has quite the temperament and is extremely stubborn. She seems to know everything that is going on in her world and is the leader of a little gang of revolutionists who take Ember into their circle as their savior. Zaphine is very pretty and a skilled wielder of magic and also Ada’s ex-girlfriend. She is the most skeptical of the group and in my opinion an interesting character with much potential, but not a lot of page time. And the boys are rather unimportant? One of them likes to drink and the other is his cousin and his fond of Zaphine. Ok, great.

I won’t talk much about the romance. I don’t think it is unnecessary, but the way it happened was just too fast, too much, too soon. I probably rolled my eyes very hard at some romancy parts. Sorry, but it all starts in the second half of the book, they fall in love and then they part again and I just ???? what even was that?

The story itself is really interesting though. I liked the concept of three worlds that were once one but were ripped apart. And the magic system(s) were really cool as well, I just wish they were more developed.

To summarize it all, I have to say that the second half of the book was so much better than the first, there was more action, more character development and the reader finally gets to know where the book is going. I found the concept of the story to be intriguing, but the characters kind of destroyed it for me. I’m sorry to say that. But unfortunately, I didn’t get warm with the most important characters and that made my reading experience not so fun at some points. The thing is, I still enjoyed the second half of the book a lot, the writing was okay, very easy to read and also very detailed. And even though I did not like the characters very much, I still want to know how the story continues.