Through love, all is possible. | House of Earth and Blood | Review

Bryce Quinlan had the perfect life—working hard all day and partying all night—until a demon murdered her closest friends, leaving her bereft, wounded, and alone. When the accused is behind bars but the crimes start up again, Bryce finds herself at the heart of the investigation. She’ll do whatever it takes to avenge their deaths.
Hunt Athalar is a notorious Fallen angel, now enslaved to the Archangels he once attempted to overthrow. His brutal skills and incredible strength have been set to one purpose—to assassinate his boss’s enemies, no questions asked. But with a demon wreaking havoc in the city, he’s offered an irresistible deal: help Bryce find the murderer, and his freedom will be within reach.
As Bryce and Hunt dig deep into Crescent City’s underbelly, they discover a dark power that threatens everything and everyone they hold dear, and they find, in each other, a blazing passion—one that could set them both free, if they’d only let it. (goodreads) 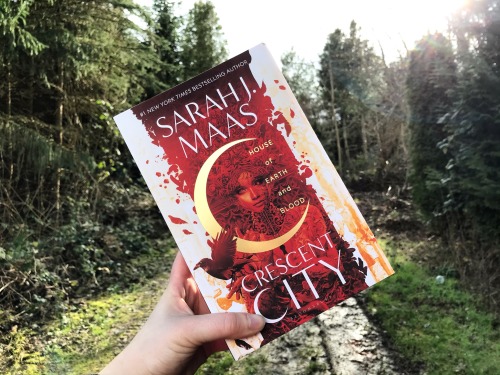 I originally didn’t plan on reading House of Earth and Blood. But then, Sarah J. Maas is one of those authors for me with whom I have kind of a love-hate relationship where it’s a 50/50 chance of absolutely loving a book or really not liking it. And to be honest, this book was the personification (or bookification?) of that relationship.
When my dad asked me this morning “and? Did you finish? How was it?” I just sighed.

But I shall explain in detail what I liked and what… not so much.

The protagonist is Bryce. She acts like a party girl without any cares when she is actually super smart and cares a lot while still having fun with her friends on parties. I’ll just go ahead and say how it is: I found her incredibly annoying. While I do understand why she acted the way she did I just thought she was too perfect. While other characters doubted her, the reader always knew how it really looked inside her. She was just too good, too perfect. Like, she’s good at everything? She has great social skills when she wants to, she can fight with apparently every single weapon and then it turns out she also has power and she’s becoming that super powerful perfect being she has been all along and I just kind of flipped my shit. I don’t need another character who’s perfect at everything. The one thing she did where I actually howled and cackled, when she killed someone, burned him and then fucking vacuumed the ashes. That was amazing.

Then there’s Hunt. A fallen angel, punished by becoming a slave. But hey, at least he’s a hot slave. He’s an “alphahole”. He has a super tragic past but of course he gets the hots for Bryce and then the feelings, too. He wants to be free and works toward that goal in every way he can, no matter who he has to betray or kill for it. And can we talk about their stupid horniness for a second? Boy, you got extremely important parts of yourself cut off and a day later all you can think about is having sex with Bryce? You’re an idiot but go on, I guess.

Same as with Maas’ previous series A Court of Thorns and Roses, I wasn’t too much of a fan of the main characters. But I really liked the side characters. I especially liked Danika, Bryce’s best friends who is an extrovert personified and who doesn’t give two fucks. She’s loyal and fun and I wish I could have had more of her. Another person I liked was Ruhn, Bryce’s half brother. He’s described as “half-brother. Full prick.” But honestly? Bryce was a prick to him and he was just trying to have her as his sister. He’s tehre when she needs him, he has struggles of his own and he has a really cool friend circle. Much love from me on that front. 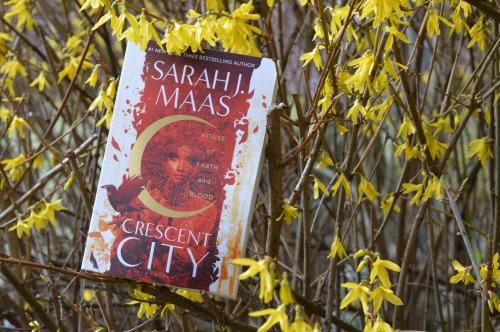 Okay, here it goes. Sorry for the wording but where the fuck is the world building? Where? Not in the book, that’s for sure. I swear I was looking fot it, constantly. But it was just… gone. It was such a weird mix of European mythologies and history, especially Roman and Norse. So, the Planet or world or country or whatever is called Midgard, but then they have all this Latin stuff. I mean good ol’ SPQR aka Senatus populusque Romanus goes SPQM aka Senatus populusque Midgard. Where is the genitive? There is so much Latin. And names and place names and shit from Rome. But then Norse as well.
Anyways, what I don’t understand is how all of it links together. Does every race bring another language with them? Angels = Romans? But then Hunt’s real name is Orion who is Greek and then there are creatures from Egyptian mythology and I just don’t understand how all of it works together? Or doesn’t it matter because it’s a fantasy world and I should forget about everything I’ve ever learned? But even if I ignore my knowledge, I still don’t know much about the world and its societies and structures. And that is what annoyes the Hel out of me.
I almost forget about the modern technology. Woah. Because there are cars. And phones. And light. And all the power comes from firstlight, which comes from magic people finding their powers for the first time. But… does it run out? Does all the energy come from it? Do they have other energy sources? Does their technology work like ours?
I also don’t understand how the different people are ordered. Angels up above and humans and “Lowers” beneath everyone else. But how did they all get into the world in the first place, how does it all work? I’m so confused.

What can I say except it was typical Sarah J. Maas writing? She has that distinct writing style. A lots of “utterly” and “gods-damned” (which gods?????? there were no gods in this book) and “death incarnates”. It’s quite simple, short sentences but with a lot of meaning and laced with emotion.

I just. House of Earth and Blood left me angry and confused. The thing is, I THRIVE on anger. The first 200 pages were the worst. I rolled my eyes so hard they hurt sometimes. But I powered through because I needed to know if it might get better. Or to at least fuel my anger and have a good rant. Unfortunately, it turned out to be the latter. At no point did I get really invested in it and during the whole 803 pages, there were exactly two moments I was happy about. I’m sorry to say this but this book definitely wasn’t for me.