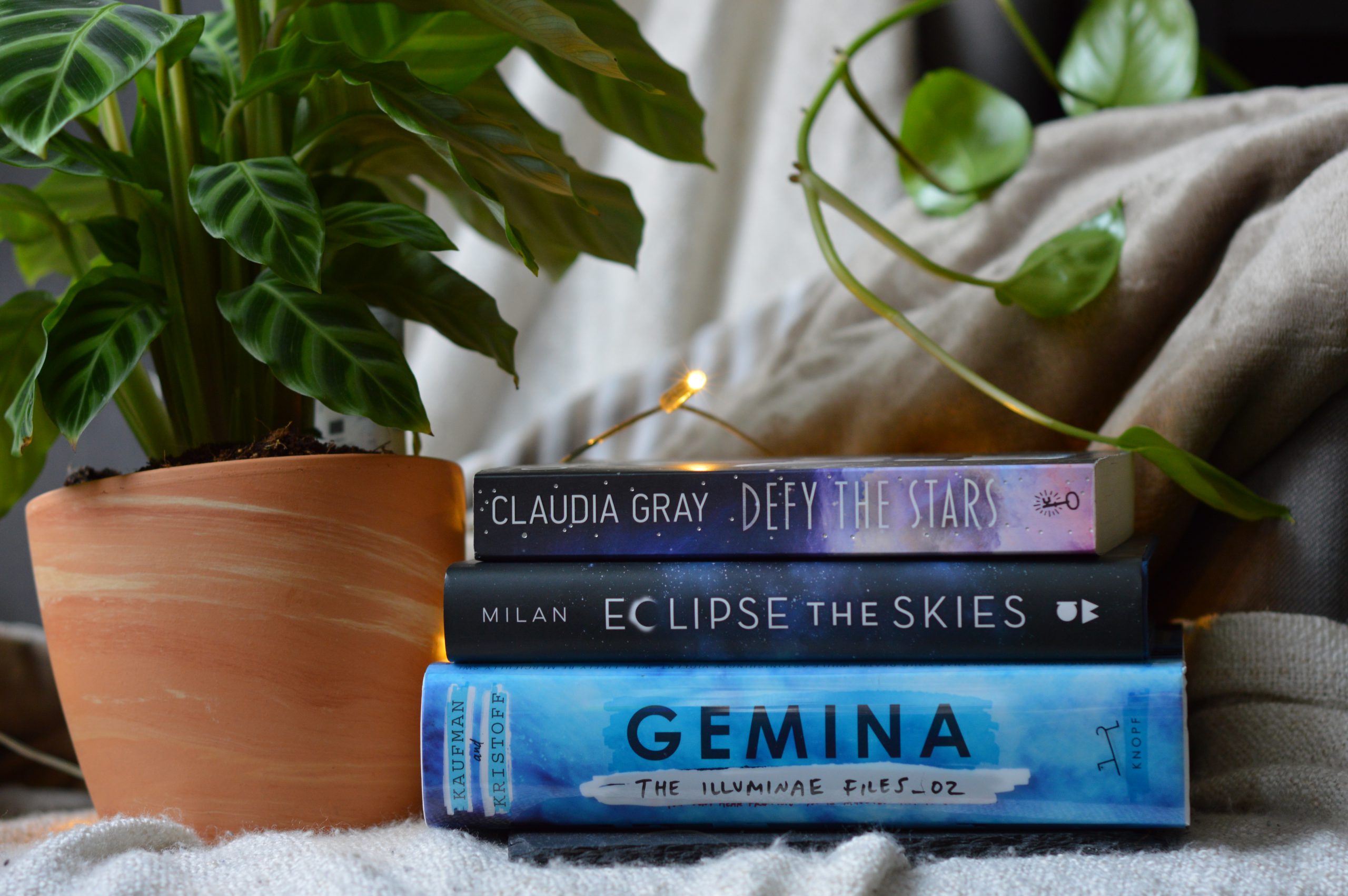 It’s time for more ships! If you’re interested in actual ships that sail on water, you can check out this post. There I collected my favourite books that prominently feature ships. But let’s come to another topic. Space ships. Ships, but among the stars. Flying, racing, fighting while there is silence around them. There are different space ships, big and small, living, just some metal. And I’m in love with them all. I don’t want you to wait any longer, so here we go right away. If you want to know more about the books, click on the covers to get to the goodreads page.

Hana isn’t supposed to exist. She’s grown up hidden by her mother in a secret room of the bioship Cyclo until the day her mother is simple gone – along with the entire crew. Cyclo tells her she was abandoned, but she’s certain her mother wouldn’t leave her there to die. And Hana isn’t ready to die yet. She’s never really had a chance to live.
Fenn is supposed to die. He and a crew of hired mercenaries are there to monitor Cyclo as she expires, and the payment for the suicide mission will mean Fenn’s sister is able to live. But when he meets Hana, he’s not sure how to save them both.
As Cyclo grows sicker by the day, they unearth more secrets about the ship and the crew. But the more time they spend together, the more Hana and Fenn realize that falling for each other is what could ultimately kill them both.

Ignite the Stars by Maura Milan

Everyone in the universe knows his name. Everyone in the universe fears him. But no one realizes that notorious outlaw Ia Cōcha is a seventeen-year-old girl.
A criminal mastermind and unrivaled pilot, Ia has spent her life terrorizing the Olympus Commonwealth, the imperialist nation that destroyed her home. When the Commonwealth captures her and her true identity is exposed, they see Ia’s age and talent as an opportunity: by forcing her to serve them, they will prove that no one is beyond their control.
Soon, Ia is trapped at the Commonwealth’s military academy, desperately plotting her escape. But new acquaintances—including Brinn, a seemingly average student with a closely-held secret, and their charming Flight Master, Knives—cause Ia to question her own alliances. Can she find a way to escape the Commonwealth’s clutches before these bonds deepen?

⇒ full of action, snarky and sassy characters, friendship, the romance is basically nonexistens
> I actually wrote a review.

Defy the Stars by Claudia Gray

Noemi is a young and fearless soldier of Genesis, a colony planet of a dying Earth. But the citizens of Genesis are rising up – they know that Earth’s settlers will only destroy this planet the way they destroyed their own. And so a terrible war has begun.
When Noemi meets Abel, one of Earth’s robotic mech warriors, she realizes that Abel himself may provide the key to Genesis’ salvation. Abel is bound by his programming to obey her – even though her plan could result in his destruction. But Abel is no ordinary mech. He’s a unique prototype, one with greater intelligence, skill and strength than any other. More than that, he has begun to develop emotions, a personality and even dreams. Noemi begins to realise that if Abel is less than human, he is more than a machine. If she destroys him, is it murder? And can a cold-blooded murder be redeemed by the protection of a world?
Stranded together in space, they go on a whirlwind adventure through Earth’s various colony worlds, alongside the countless Vagabonds who have given up planetary life altogether and sail forever between the stars. Each step brings them closer – both to each other and to the terrible decision Noemi will have to make about her world’s fate, and Abel’s.

Kady thought breaking up with Ezra was the worst thing she’d ever been through. That was before her planet was invaded. Now, with enemy fire raining down on them, Kady and Ezra are forced to fight their way onto one of the evacuating craft, with an enemy warship in hot pursuit.
But the warship could be the least of their problems. A deadly plague has broken out and is mutating, with terrifying results; the fleet’s AI, which should be protecting them, may actually be their biggest threat; and nobody in charge will say what’s really going on. As Kady plunges into a web of data hacking to get to the truth, it’s clear only one person can help her bring it all to light: Ezra.

The Earth is dying. Darrow is a Red, a miner in the interior of Mars. His mission is to extract enough precious elements to one day tame the surface of the planet and allow humans to live on it. The Reds are humanity’s last hope.
Or so it appears, until the day Darrow discovers it’s all a lie. That Mars has been habitable – and inhabited – for generations, by a class of people calling themselves the Golds. A class of people who look down on Darrow and his fellows as slave labour, to be exploited and worked to death without a second thought.
Until the day that Darrow, with the help of a mysterious group of rebels, disguises himself as a Gold and infiltrates their command school, intent on taking down his oppressors from the inside. But the command school is a battlefield – and Darrow isn’t the only student with an agenda.

These are my space favourites, though there are many more on my tbr. What are your favourites? Tell me, so I can add them to my already too big tbr pile, I LOVE SPACE BOOKS.