MY SISTER, THE SERIAL KILLER by OYINKAN BRAITHWAITE | book review

When Korede’s dinner is interrupted one night by a distress call from her sister, Ayoola, she knows what’s expected of her: bleach, rubber gloves, nerves of steel and a strong stomach. This’ll be the third boyfriend Ayoola’s dispatched in, quote, self-defence and the third mess that her lethal little sibling has left Korede to clear away. She should probably go to the police for the good of the menfolk of Nigeria, but she loves her sister and, as they say, family always comes first. Until, that is, Ayoola starts dating the doctor where Korede works as a nurse. Korede’s long been in love with him, and isn’t prepared to see him wind up with a knife in his back: but to save one would mean sacrificing the other… (goodreads) 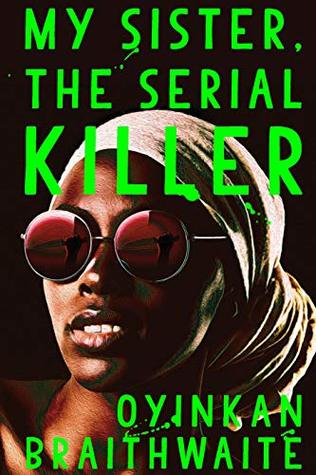 This book was something. I don’t know what I expected, but it surely wasn’t this. To be honest, I can’t put my thoughts and feelings into proper words which is mostly because I’m not sure how to feel. It surely wasn’t a bad story, it was actually pretty good but then it made me so angry.

The biggest problem for me were the characters. I didn’t like any of them, not really. There’s Ayoola, who’s manipulative and murderous and always, always has a new man by her side. That’s not a bad thing, technically, but the way it affects Korede, the protagonsit, is. Korede suffers from her sister’s and mother’s behaviour, even if she doesn’t really notice it. But she still loves them, especially her sister who she grew up protecting. While Ayoola is out there living her life and doing what she wants, knowing that Korede will clean up every single one of her messes, Korede’s life is slowly taking a turn for the worse. She realizes a lot of things, but she can’t seem to change it.

The other side characters were basically all horrible. I’m sorry, but they were. Blinded by beauty, jealousy and greed (for sensation) and lack of understanding eating away at them. They live in their own bubble, not caring for others except when it’s something bad or super good happening to them. There are no friends. For anyone.

I had a hard time with the characters. But the writing style was great. It had short sentences, focusing mostly on the protagonist and her feelings. Depending on those, it could change. The chapters were really short as well, so the reader gets snippets of important points in the character’s lives, both in the past and the present.

I did enjoy the setting in Lagos though. The problems of living there were subtly woven into the story.

So yeah, I’m torn. I enjoyed reading the book, but I was constantly angry and ready to slap sense into the characters. If you expect a thriller in the usual sense, it’s not. The book is short and heavily character driven.