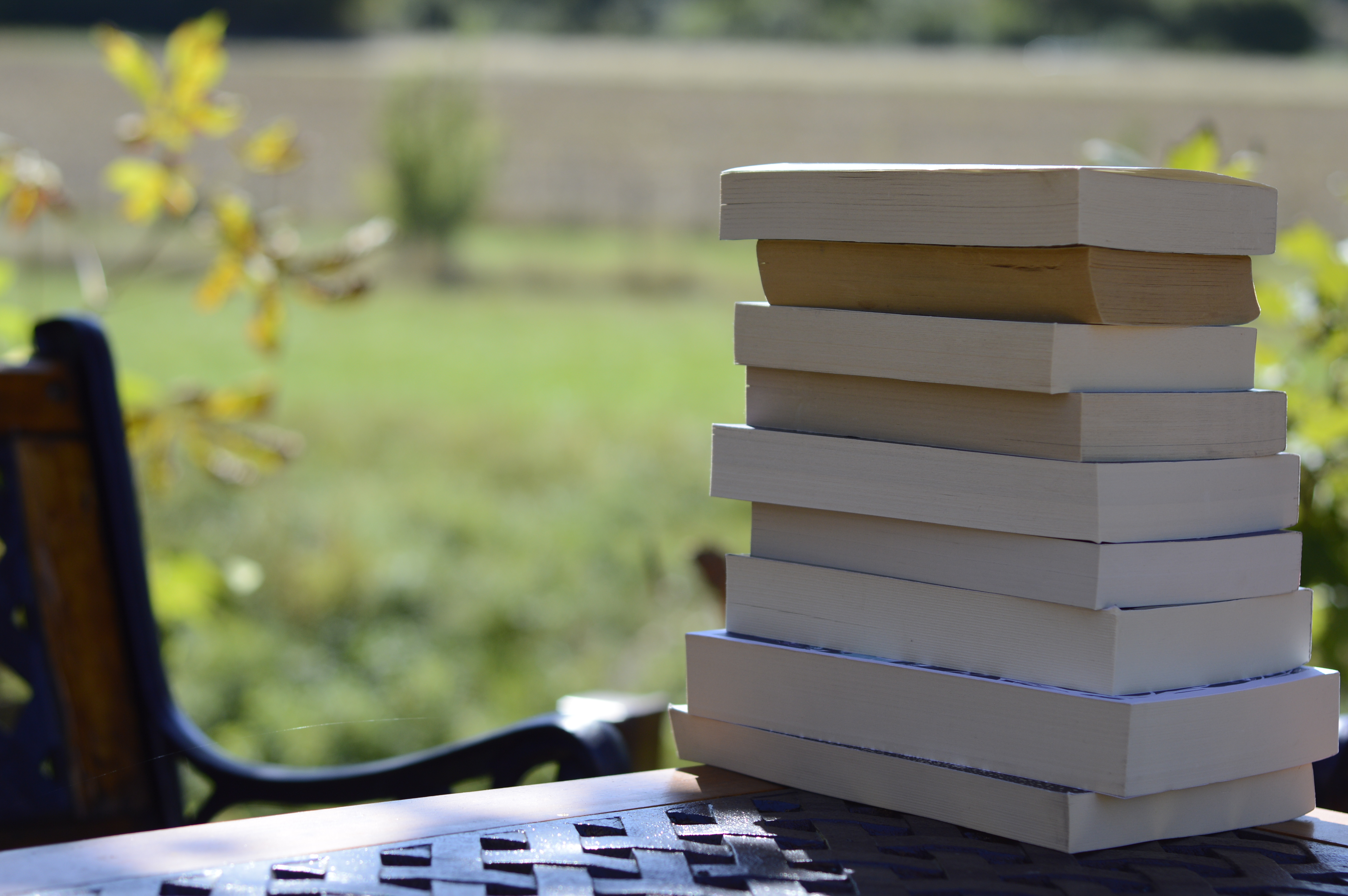 I’m going on vacation! Yay! After one year break, I’m going back to France ♥ I’ve gone there every year since 2006 at least once. And this year it’s Bordeaux. I’ve never been there before, so I am quite excited. I know that I’ll probably walk a lot and maybe won’t have tons of time to read, but of course I’m taking a lot of books with me. And of course I’m wondering, if those are enough. Anyways, I wanted to show you guys the books joining me on this trip. Miryem is the daughter and granddaughter of moneylenders… but her father isn’t a very good one. Free to lend and reluctant to collect, he has loaned out most of his wife’s dowry and left the family on the edge of poverty–until Miryem steps in. Hardening her heart against her fellow villagers’ pleas, she sets out to collect what is owed–and finds herself more than up to the task. When her grandfather loans her a pouch of silver pennies, she brings it back full of gold.
But having the reputation of being able to change silver to gold can be more trouble than it’s worth–especially when her fate becomes tangled with the cold creatures that haunt the wood, and whose king has learned of her reputation and wants to exploit it for reasons Miryem cannot understand. (Source)

If We Were Villains by M. L. Rio

On the day Oliver Marks is released from jail, the man who put him there is waiting at the door. Detective Colborne wants to know the truth, and after ten years, Oliver is finally ready to tell it.
Ten years ago: Oliver is one of seven young Shakespearean actors at Dellecher Classical Conservatory, a place of keen ambition and fierce competition. In this secluded world of firelight and leather-bound books, Oliver and his friends play the same roles onstage and off: hero, villain, tyrant, temptress, ingénue, extra. But in their fourth and final year, the balance of power begins to shift, good-natured rivalries turn ugly, and on opening night real violence invades the students’ world of make believe. In the morning, the fourth-years find themselves facing their very own tragedy, and their greatest acting challenge yet: convincing the police, each other, and themselves that they are innocent. (Source)

Beneath the Citadel by Destiny Soria (ARC) In the city of Eldra, people are ruled by ancient prophecies. For centuries, the high council has stayed in power by virtue of the prophecies of the elder seers. After the last infallible prophecy came to pass, growing unrest led to murders and an eventual rebellion that raged for more than a decade.
In the present day, Cassa, the orphaned daughter of rebels, is determined to fight back against the high council, which governs Eldra from behind the walls of the citadel. Her only allies are no-nonsense Alys, easygoing Evander, and perpetually underestimated Newt, and Cassa struggles to come to terms with the legacy of rebellion her dead parents have left her — and the fear that she may be inadequate to shoulder the burden. But by the time Cassa and her friends uncover the mystery of the final infallible prophecy, it may be too late to save the city — or themselves. (Source)

Meet Emily – she can solve advanced mathematical problems, unlock the mind’s deepest secrets and even fix your truck’s air con, but unfortunately, she can’t restart the Sun.
She’s an artificial consciousness, designed in a lab to help humans process trauma, which is particularly helpful when the sun begins to die 5 billion years before scientists agreed it was supposed to.
So, her beloved human race is screwed, and so is Emily. That is, until she finds a potential answer buried deep in the human genome. But before her solution can be tested, her lab is brutally attacked, and Emily is forced to go on the run with two human companions – college student Jason and small-town Sheriff, Mayra.
As the sun’s death draws near, Emily and her friends must race against time to save humanity. But before long it becomes clear that it’s not only the species at stake, but also that which makes us most human. (Source)

The sky is falling by Sidney Sheldon

Washington TV anchorwoman Dana Evans (from Best Laid Plans) suspects the accidents befalling the rich Winthrop family, killing all five members, were murders. Like Chicken Little and the sky falling, she chases clues across the world to unravel an international conspiracy. The inheritance goes to charity, so money is not the motive.
Her Sarajevo ward Kemal gets expelled, a prosthetic arm, then often naps afternoons under care of kindly new housekeeper. Unseen agents follow her, bug hotel rooms, while an evil mastermind voice overhears taped conversations and supervises regular secret auctions, inviting armed wealthy customers. Witnesses and informants die before, and after meetings. Friends become foes, nobody can be trusted. (Source) Daughter of the burning city by Amanda Foody

Sixteen-year-old Sorina has spent most of her life within the smoldering borders of the Gomorrah Festival. Yet even among the many unusual members of the traveling circus-city, Sorina stands apart as the only illusion-worker born in hundreds of years. This rare talent allows her to create illusions that others can see, feel and touch, with personalities all their own. Her creations are her family, and together they make up the cast of the Festival’s Freak Show.
But no matter how lifelike they may seem, her illusions are still just that—illusions, and not truly real. Or so she always believed…until one of them is murdered.
Desperate to protect her family, Sorina must track down the culprit and determine how they killed a person who doesn’t actually exist. Her search for answers leads her to the self-proclaimed gossip-worker Luca, and their investigation sends them through a haze of political turmoil and forbidden romance, and into the most sinister corners of the Festival. But as the killer continues murdering Sorina’s illusions one by one, she must unravel the horrifying truth before all of her loved ones disappear. (Source)

When Tea accidentally resurrects her brother from the dead, she learns she is different from the other witches in her family. Her gift for necromancy means that she’s a bone witch, a title that makes her feared and ostracized by her community. But Tea finds solace and guidance with an older, wiser bone witch, who takes Tea and her brother to another land for training.
In her new home, Tea puts all her energy into becoming an asha-one who can wield elemental magic. But dark forces are approaching quickly, and in the face of danger, Tea will have to overcome her obstacles…and make a powerful choice. (Source) The Humans by Matt Haig

After an ‘incident’ one wet Friday night where Professor Andrew Martin is found walking naked through the streets of Cambridge, he is not feeling quite himself. Food sickens him. Clothes confound him. Even his loving wife and teenage son are repulsive to him. He feels lost amongst a crazy alien species and hates everyone on the planet. Everyone, that is, except Newton, and he’s a dog.
Who is he really? And what could make someone change their mind about the human race. . . ? (Source)

Are we all Lemmings and Snowflakes? by Holly Bourne

Welcome to Camp Reset, a summer camp with a difference. A place offering a shot at “normality” for Olive, a girl on the edge, and for the new friends she never expected to make – who each have their own reasons for being there. Luckily Olive has a plan to solve all their problems. But how do you fix the world when you can’t fix yourself? (Source)

And that’s it! Those are the books I’m taking with me. I guess those should be enough, right? Are you going on vacation? Or are you back already? Which books did you read/are you going to take with you?