I realized that I’m somehow writing less and less reviews. Currently I’m in such a “read more, write less” phase and it’s really showing. But I recently read three amazing books I’d like to show you a bit closer. They are all very queer and I enjoyed all of them a lot. Let’s go, shall we?

Georgia has never been in love, never kissed anyone, never even had a crush – but as a fanfic-obsessed romantic she’s sure she’ll find her person one day.
As she starts university with her best friends, Pip and Jason, in a whole new town far from home, Georgia’s ready to find romance, and with her outgoing roommate on her side and a place in the Shakespeare Society, her ‘teenage dream’ is in sight.
But when her romance plan wreaks havoc amongst her friends, Georgia ends up in her own comedy of errors, and she starts to question why love seems so easy for other people but not for her. With new terms thrown at her – asexual, aromantic – Georgia is more uncertain about her feelings than ever.
Is she destined to remain loveless? Or has she been looking for the wrong thing all along? (goodreads)

In my personal opinion I found this book fantastic. I just love Alice Oseman’s books, they feel so incredibly real and have a wonderful sense of humor (often the sarcastic and dry one, mixed with dumb jokes and inside jokes) and Loveless was no different. While UK and German universities are quite different, the book really managed to portray that first semester feeling, the nervousness, the worries, the excitement. This story is also super sex positive, there is a lot of talk about it, how it works, how people want it or not want it, how everyone experiences it differently, how a lot of people masturbate.
Loveless also talks a lot about relationships, the good and the bad, the romantic and the platonic kind. The book is an ode to friendships and their importance and I really loved seeing friendships being valued that much.
I generally loved the characters and the journey they go through. Some of them know exactly who they are, some have to find themselves first, some discover completely new sides to themselves. 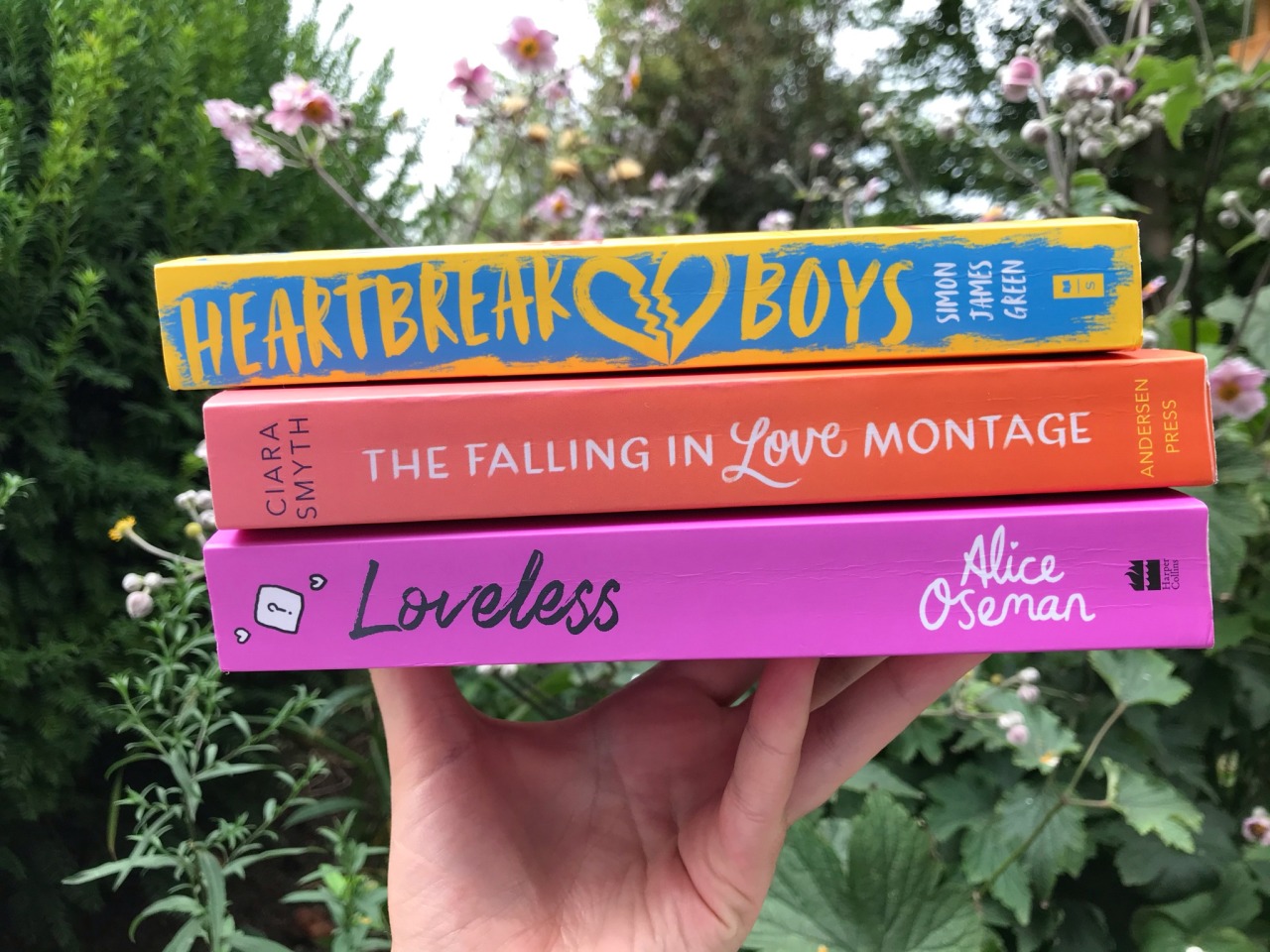 Faking the best summer ever is a lot harder than it looks…
At the start of summer, Jack and Nate find themselves dumped as their respective exes, Dylan and Tariq, start up a new relationship together. Not only that, their exes start posting pics on social media, showing the whole world how fabulous their new life together is!
Jack and Nate are reeling. Not to be outdone, they decide to create their own ‘highlights reel’ and show their exes that they’re having an even better time.
But between the depressing motorway service station motels, damp campsites, and an ultimate showdown with the exes, something epic really is happening: Jack and Nate are learning to get over their heartache and open themselves up to new possibilities for love. (goodreads)

Simon James Green? I love his writing. Opening one of his books, I just know I’m going to love it. They are pure fun end enjoyment for me. This book was quite character driven, told from both Jack and Nate’s PoVs. Jack is that loud, flamboyant boy who won’t be shut up but had to go through a lot to get there. Nate is calmer, a bit awkward but if it’s important, he’ll stand up for it. The two of them are now-estranged best friends and have to get back into the rhythm of their friendship which is easier said than done. But I loved being a part of their road trip through the UK, trying to get revenge on their exes while not realizing that their hearts have apparently set a whole other goal for them.
They still know each other, but also have to get to re-know each other, some things coming to light that they hadn’t known about each other. This story is told through dumb jokes, banter and dry side comments from annoying little sisters.
The only thing I wasn’t completely happy with is how the situation with the exes turned out in the end. It left me a bit unsatisfied and I somehow expected more on that part. But apart from that, I absolutely enjoyed Heartbreak Boys. 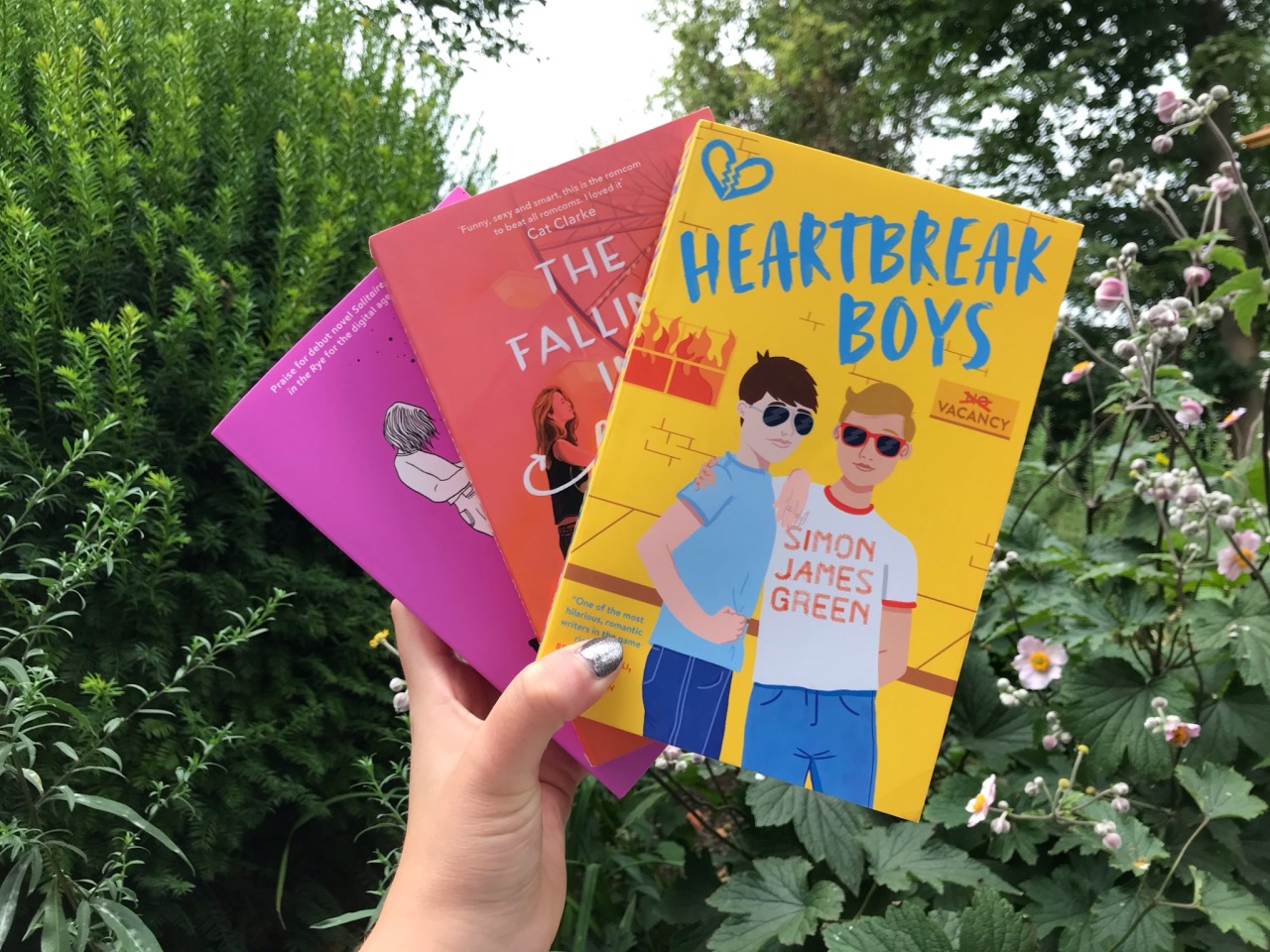 The Falling in Love Montage by Ciara Smyth

Saoirse doesn’t believe in love at first sight or happy endings. If they were real, her mother would still be able to remember her name and not in a care home with early onset dementia. A condition that Saoirse may one day turn out to have inherited. So she’s not looking for a relationship. She doesn’t see the point in igniting any romantic sparks if she’s bound to burn out.
But after a chance encounter at an end-of-term house party, Saoirse is about to break her own rules. For a girl with one blue freckle, an irresistible sense of mischief, and a passion for rom-coms.
Unbothered by Saoirse’s no-relationships rulebook, Ruby proposes a loophole: They don’t need true love to have one summer of fun, complete with every cliché, rom-com montage-worthy date they can dream up—and a binding agreement to end their romance come fall. It would be the perfect plan, if they weren’t forgetting one thing about the Falling in Love Montage: when it’s over, the characters actually fall in love… for real. (goodreads)

This book is definitely one of my favourites this year! This, too, is a very character driven story, told from Saoirse’s PoV. We follow her as she struggles with her whole situation: her mother in a care home, her dad having a new woman at his side, Saoirse not being over her ex and also losing her best friend to said ex. But then she meets Ruby and the two immediately like each other. But Saoirse doesn’t want anything longlasting and they agree to just have the fun, so they basically reenact rom com classics, but only the part where the characters start to get to know each other. Of course, it never completely works out how you think a situation of ~feeling~ will turn out. I loved reading about Saoirse and her family and how they try to make everything work.
Saoirse is angry a lot and I completely understood her, but I also understood her father really well. I liked how they worked as a team but also didn’t, their realtionship was extremely interesting to read about.
I also really liked Ruby, who is more of a sunshine, but calm and reassuring. I enjoyed her realtionship with Saoirse and how they work so well together even though their characters are quite different. And it pains me a bit to say this but my favourite character was the straight rich boy and I absolutely loved his enemyship with Saoirse as well as his connection to Ruby.

Have you read any of these books? What did you think? If you haven’t read them, do you plan to do so?