WERBUNG / ADVERTISEMENT
I received a copy of this book from the publisher via NetGalley. That doesn’t influence my honest opinion.

Tina never worries about being ‘ordinary’—she doesn’t have to, since she’s known practically forever that she’s not just Tina Mains, average teenager and beloved daughter. She’s also the keeper of an interplanetary rescue beacon, and one day soon, it’s going to activate, and then her dreams of saving all the worlds and adventuring among the stars will finally be possible. Tina’s legacy, after all, is intergalactic—she is the hidden clone of a famed alien hero, left on Earth disguised as a human to give the universe another chance to defeat a terrible evil.
But when the beacon activates, it turns out that Tina’s destiny isn’t quite what she expected. Things are far more dangerous than she ever assumed. Luckily, Tina is surrounded by a crew she can trust, and her best friend Rachel, and she is still determined to save all the worlds. But first she’ll have to save herself. (goodreads) 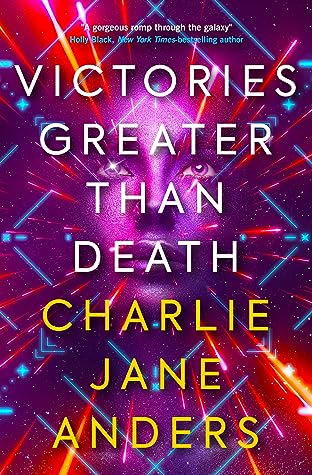 I liked getting thrown right into the story. The action is definitely there from the start and the continues to have a big part of the plot. There were quieter moments in between, though, moments that focused on showing the different characters and their interests and their relationships with each other. I liked the mix of action and character & world building.

I also loved how wonderfully, unapologetically queer this book was. Throughout the story, we meet many different alien species and all of them have a different approach to gender and sexuality and you know what? I am here for that. It was so nice to see more than two genders, different ways of sex and exploring sexuality and everyone just accepting it? That was so amazing and refreshing! Especially because everyone introduced themselves with their pronouns. Even when it was an exchange with the enemy it was always “I’m xy and my pronouns are xy” and that was so good to see. It was normal through the whole universe and I really wish it was like that here as well.

I also really enjoyed the cast of characters, all their little quirks and their interests, but also their problems and insecurities and their hopes. While the cast is quite big, each character is well characterized. Of course not everyone equally, that is impossible for so many characters but just enough to not make the characters fall flat.

I can’t even pinpoint what my problem with Victories Greater than Death was. Especially towards the end, I enjoyed it so much. But I never could get entirely warm up to the story as a whole. I strongly believe this is a case of “the right book at the wrong time” so I will definitely reread it.

I strongly recommend this amazingly queer book, especially if you like space, spaceships and cool group dynamics!