Here comes an almost non-bookish post. It’s my first BuJo-themed post. I have my bullet journal since October 2017 and I really like it. Mostly because it is relaxing, but it also helps me organize my days and remember stuff. Because I am a very chaotic, very forgetful person. And because of that, I decided to share my planning for March with you. I know, March has already begun, but ehhhh better late than never. I use a blank Leuchtturm1917 in azur. March has become a very chaotic-looking month, well some pages have, at least. Anyways, let’s have a look, shall we? 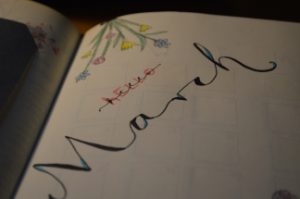 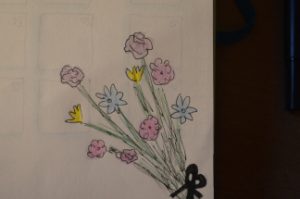 My title page is always a pretty simple thing. Because March is kind of the embodiment of spring, I decided to work with flowers. So my title page just says ‘hello March‘ and shows a couple of flower boquets. On the left side is a black and white photo of an orca. Because I love to put a lot of photos and images into my journal, I like to put something on one side and an image on the other. It doesn’t always fit which is the case here, but whatever. 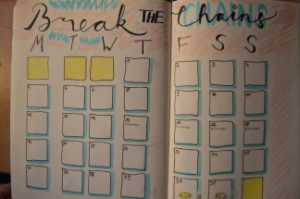 My monthly calendar is probably one of the most chaotic looking pages. But I am currently OBSESSED with the Red Rising series by Pierce Brown, so of course I had to put a quote there. I use this calendar to remind myself of important dates or birthdays. As you can see, I’ve already put down the book fair in Leipzig. It’s just nice to have a general overview.

This is the first month I am not making a weekly spread. Well, not exactly. So far, the pages are mostly blank and I’ve just written the week on top. Because I want to do it very diary-style this month. After each day, I want to write down the most important things and I don’t want to watch out for space or anything. I just want to write down thoughts and feelings.

Yay, tracker time. In the last few months I had a mood tracker and a slee tracker. But this month I decided to only have a ‘big’ mood tracker, mostly because I wanted a big, colourful flower bouqet on one side. Also, isn’t this photo of those shoes gorgeous. 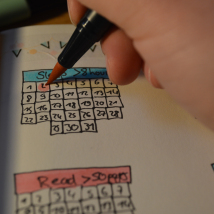 Instead of a sleep tracker on one page, I decided to go with a few smaller trackers. I made one for more than 8 hours of sleep, reading more than 50 pages per day, not spending money on books or merch, actually leaving the house and working on my bullet journal. btw, the photo I put next to the trackers is a painting by Geoff hunt and also the cover of my current read, the Ionian mission by Patrick O’Brian.

Of course, there are also bookish things to be found. For one, there is a page for Leipziger Buchmesse. Here I’ll write down appointments/meet-ups/events that happen at the bookfair. The other bookish things are my book haul & the books I’ve read. As soon as I finished the page I realized that I made a big mistake. Because for the Book Haul I have only planned 12 books. 12! In a month so many good books are released and it’s a book fair? What the hell, what did I think? Nothing, probably. Anyways, either I can only buy 12 books or I have to find a solution.

And that’s it. I hope you could get an idea about my bullet journal and what I’m using it for. Do you have a bullet journal? What do you use it for? When did you start?