The City of Dusk by Tara Sim | ARC-Review

Everything about The City of Dusk spoke to me. The cover is gorgeous, it seemed to be dark and full of surprising characters, and it is written by an author I previously enjoyed (⇒ Scavenge the Stars). So of course, I was over the moon when I got accepted for an ARC. Continue reading to find out if it lived up to my expectations.

ABOUT THE CITY OF DUSK

The Four Realms—Life, Death, Light, and Darkness—all converge on the city of dusk. For each realm there is a god, and for each god there is an heir.
But the gods have withdrawn their favor from the once vibrant and thriving city. And without it, all the realms are dying.
Unwilling to stand by and watch the destruction, the four heirs—Risha, a necromancer struggling to keep the peace; Angelica, an elementalist with her eyes set on the throne; Taesia, a shadow-wielding rogue with rebellion in her heart; and Nik, a soldier who struggles to see the light— will sacrifice everything to save the city.
But their defiance will cost them dearly. 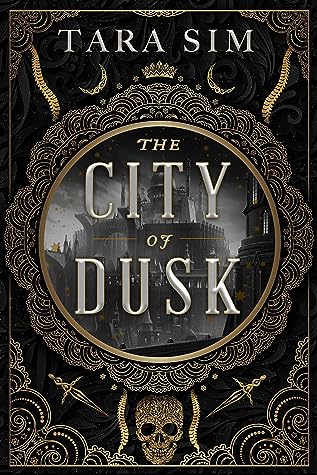 Surprisingly enough, I didn’t enjoy The City of Dusk as much as I thought I would. But it definitely had some amazing aspects, I might have found a new favourite character and I’m also weirdly hung up on the story.

I liked The City of Dusk even though it was a bit too long in my opinion. The story could have easily been two books already, there is just so much info on world building and characters that it is honestly mind-blowing. I still enjoyed reading it and I especially loved some of the characters and despite the pacing and world building troubles I had, I would still recommend this to everyone who likes dark fantasy novels with a bit of blood and gore and complex characters!

You might enjoy The City of Dusk if you like your books with some of the following:

Have you read The City of Dusk or any other novel by Tara Sim? What books with unique magic systems do you know?