Help, I Fell In a Hole And Can’t Get Out – Emily Henry Edition 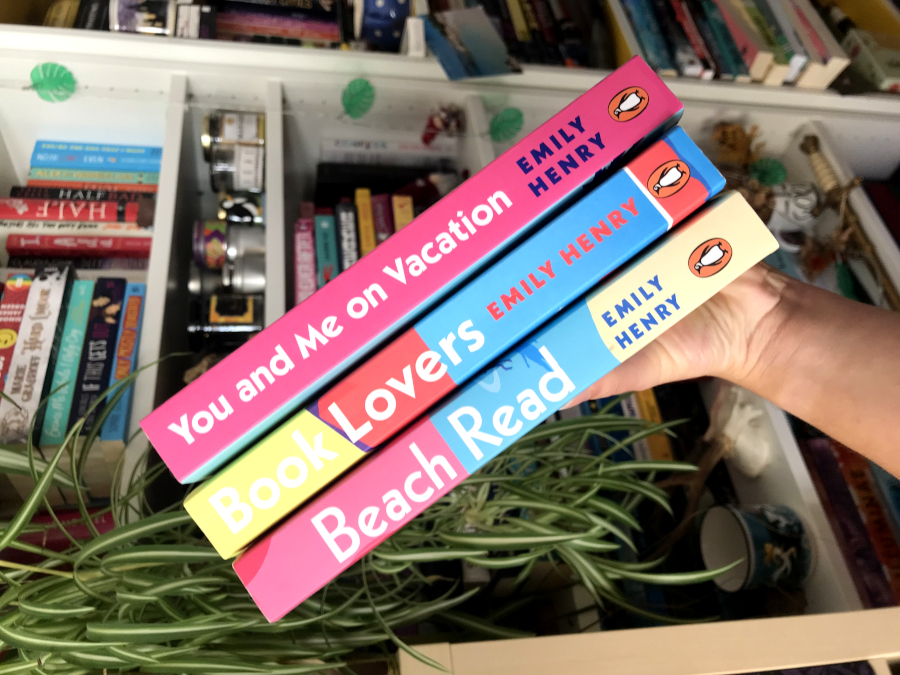 Hoohoo, friends of the blade.

Once in a blue moon I get a serious new obsession. Before it has been the All For the Game series and Fence, there was the Grishaverse, Avatar: The Last Airbender,… You name it, I become obsessed easily and the things I really, really love stay with me and I think about them a lot. As it gets more and more, my mind becomes fuller and more confusing but that’s a story for another day.

Today’s story is about Emily Henry’s adult romance books. I’ve owned The Love that Split the World for ages now but never read it. I read Beach Read last year and it quickly became one of my favourite books of 2021. This month, I read Book Lovers and immediately after, You and Me on Vacation. And what can I say? I became obsessed. Will this post contain reviews? Just me rambling away about how much I love Emily Henry’s writing? An ode to summer romances? An accumulation of favourite tropes? I guess you have to see for yourself the whole I digged, threw myself in and now can’t get out of. 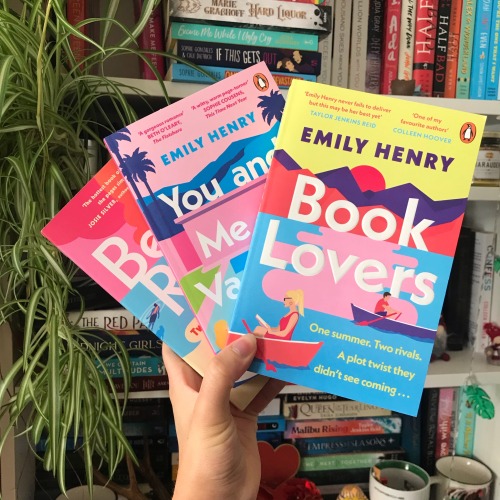 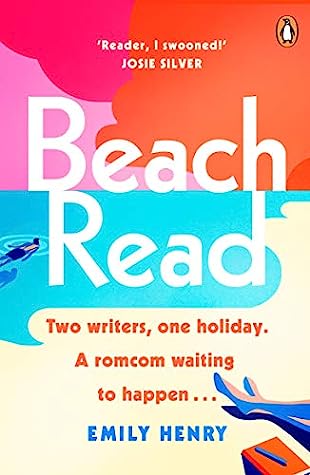 Synopsis
January is a hopeless romantic who likes narrating her life as if she’s the heroine in a blockbuster movie.
Augustus is a serious literary type who thinks true love is a fairy-tale.
January and Augustus are not going to get on.
But they actually have more in common than you’d think:
They’re both broke.
They’ve got crippling writer’s block.
They need to write bestsellers before the end of the summer.
The result? A bet to see who can get their book published first.
The catch? They have to swap genres.
The risk? In telling each other’s stories, their worlds might be changed entirely…

I really, really enjoyed both the characters and their relationship. Both of them are struggling writers, they share some problems but are still very different people. I liked how they come together in their differences and similarities and how they are still rivals which gives the whole relationship a bit of spice.

But I also really loved how each character’s journey was written. Not only are they struggling writers, they struggle with themselves as well. They have lost their place in the world a bit and I liked how they find each other. They help each other out knowingly and unknowingly, they care when nobody else really does. I liked how they bring out the best in each other and how they change thanks to new knowledge and experiences.

And while I expected a fun, summery romance I got so much more. I got an emotional roller coaster. I got what I expected, I got the jokes and fluff and the happiness, but I also received struggles and trauma, complicated families and people losing themselves. I got grief, I got healing, I got love and I got tenderness and people so caring it made me cry.

YOU AND ME ON VACATION (=People We Meet On Vacation) 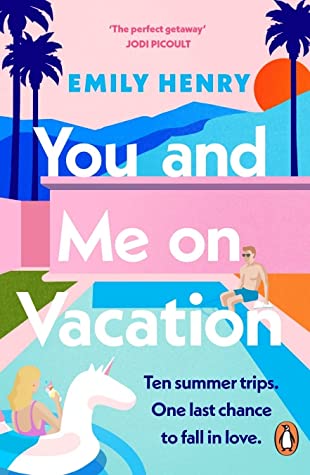 Synopsis
12 SUMMERS AGO: Poppy and Alex meet. They hate each other, and are pretty confident they’ll never speak again.
11 SUMMERS AGO: They’re forced to share a ride home from college and by the end of it a friendship is formed. And a pact: every year, one vacation together.
10 SUMMERS AGO: Alex discovers his fear of flying on the way to Vancouver.
Poppy holds his hand the whole way.
7 SUMMERS AGO: They get far too drunk and narrowly avoid getting matching tattoos in New Orleans.
2 SUMMERS AGO: It all goes wrong.
THIS SUMMER: Poppy asks Alex to join her on one last trip. A trip that will determine the rest of their lives.

Even though this was my least favourite of the three Emily Henry romances published until now, I still loved it SO much. I loved how different Poppy and Alex were but how well they clicked. Estranged best friends to lovers is such a good trope, by god. I mean, there’s all the angst and the “what if”s and the tensions. The platonic love and the romantic love mixing is so sweet and beautiful and I can’t get enough of that. And it was written really well.

I loved looking back at Alex and Poppy’s friendship and their summer vacations. I loved their shared experiences, I loved how they always circle back to each other. I loved how both of them were very quirky but in complete different ways – Poppy was extroverted and dressing in the loudest colours she could find, she was always out searching for adventure while Alex was calmer but very specific about the things he liked and disliked, he was more of the shy sort but they both had their anchor in each other. The one to bring them back down or lift them up.

I loved their friendship and how it changed over the years, how it changed with partners but how at the core it stayed the same and merely became more, more platonic and more romantic love. I also loved the concept of keeping a friendship alive with yearly summer trips. 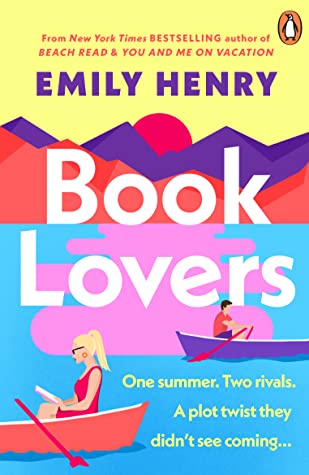 Synopsis
Nora Stephens’ life is books—she’s read them all—and she is not that type of heroine. Not the plucky one, not the laidback dream girl, and especially not the sweetheart. In fact, the only people Nora is a heroine for are her clients, for whom she lands enormous deals as a cutthroat literary agent, and her beloved little sister Libby.
Which is why she agrees to go to Sunshine Falls, North Carolina for the month of August when Libby begs her for a sisters’ trip away—with visions of a small-town transformation for Nora, who she’s convinced needs to become the heroine in her own story. But instead of picnics in meadows, or run-ins with a handsome country doctor or bulging-forearmed bartender, Nora keeps bumping into Charlie Lastra, a bookish brooding editor from back in the city. It would be a meet-cute if not for the fact that they’ve met many times and it’s never been cute.
If Nora knows she’s not an ideal heroine, Charlie knows he’s nobody’s hero, but as they are thrown together again and again—in a series of coincidences no editor worth their salt would allow—what they discover might just unravel the carefully crafted stories they’ve written about themselves.

Definitely one of my favourite books this year! What I loved most about this one were the quick, witty dialogues. The back and forth between Charlie and Nora in Book Lovers was like watching a tennis match, or better yet, a badminton match. The dialogues were so quick with amazing comebacks that made me laugh and snort so much. They had such good conversations, not only with meaningless jokes, but about deeper topics as well, their lives and their problems, feelings they sought to cover up with jokes.

The two of them were not off to a good start and I really liked how their relationship evolved from a point of annoyance to the person they trust the most. I also liked both of them individually. They both have hopes and dreams, but they feel different at approaching them. I liked that this was both something that connected them and something that caused conflict.

What I also really enjoyed here was how the families were portrayed. There is Charlie who feels like he isn’t wanted and whose relationship with his father and extended family is strained, then there’s Nora’s sister Libby who is everything to Nora after their mother died. The two are basically inseparable and I really liked how their relationship was written, their bond so strong, despite them being very different characters. 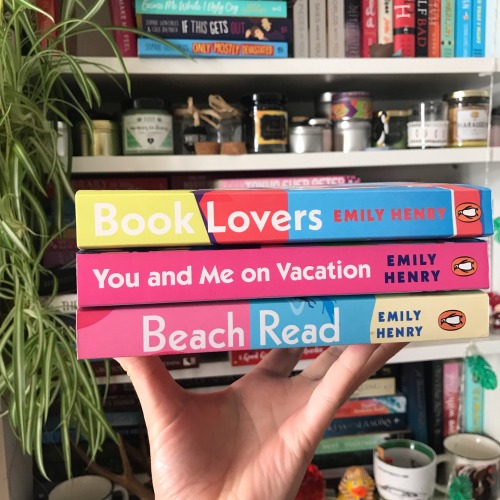 Emily Henry really has the romantic emotional range to make me both cry in every book and make me laugh so hard I cry some more. I am so glad I decided to pick these books up, they are truly amazing with beautiful dialogues, wonderfully written relationships, cool friends and families, adventure and tension. I can’t get enough of them, they are a addictive and (make me) emotional. They are also the perfect reads for summer, so if you haven’t picked them up yet, now would be a great time to do so.

I guess it’s time to thank Emily Henry for writing these wonderful books and for giving me joy during these times.

Have you read one or more of Emily Henry’s books or plan to? What are your favourite romance writers? What books do you like to read during summer?