Things I became obsessed with during the last few months 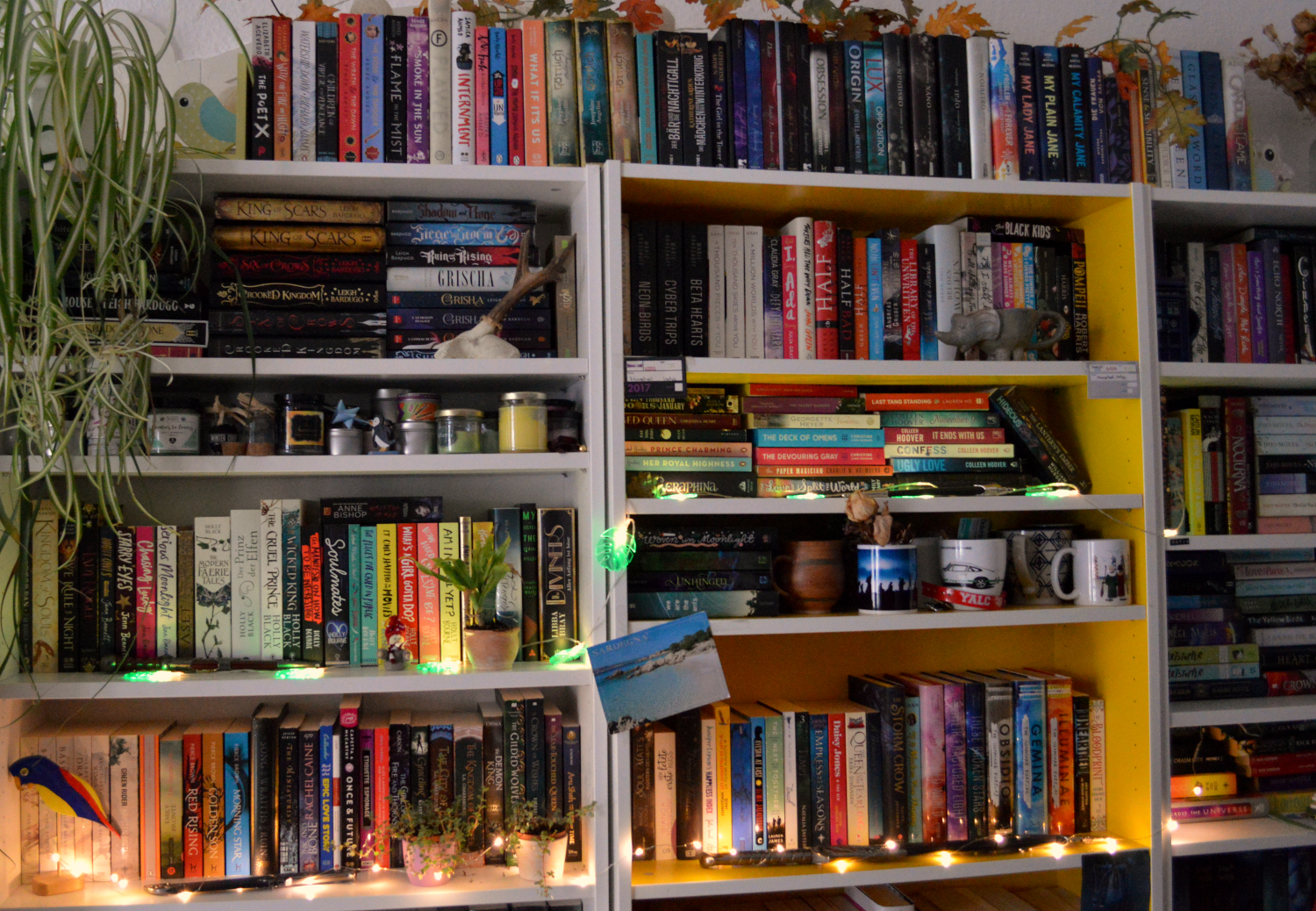 I’m tired. No, not tired. Exhausted. I don’t know about you, but this pandemic has really been feeding off my mental health. It’s slowly getting worse. And looking back at the past few years, everytime my mental health declines, I start to obsess… more obsessively. The more I stress out, the more my mind searches for something positive to focus on. And don’t get me wrong, even if my mental health would be in a perfect condition, I’d like all of the following things just as much. But I probably wouldn’t be clinging to them that much. I think. But I’ve found joy in quite a few books and series and even a film this past year and I wanted to share this joy with you all. 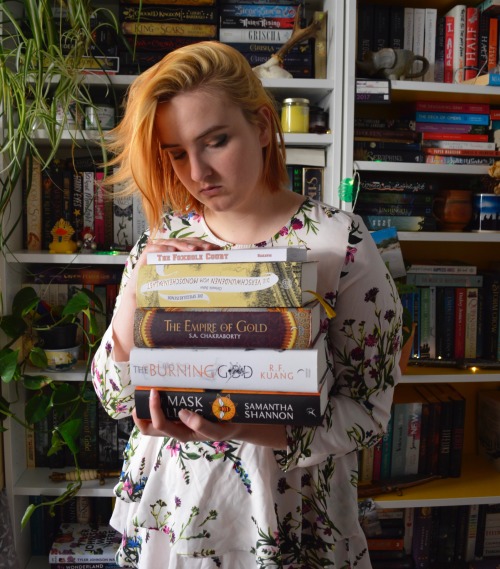 Let’s start with the film I mentioned. I rarely watch movies. My attention span is basically non-existent and my taste in films is… we shall call it interesting. And by that I mean I always watch the same 5 films on repeat. So a new film joining this selection is very rare, but Emma (2020) has made the cut! It’s based on the novel with the same name by Jane Austen. I watched Emma for the first time in August with my mom, and then again in September. And a few times since. Emma is exaggerating, fun, witty and has the most amazing costumes. And the soundtrack is also great. Out of the book and its various adaptions, this one is by far my favourite, it just makes me happy.

While I watch like one new film per year, I watch about 3 new shows. And in 2020, I finally saw Avatar: The Last Airbender & Legend of Korra for the first time. Yes, I know, I’m super late to the party. But at least I made it and I’m so glad I did. The whole universe has very quickly become one of my all time favourites, I love the world and its characters so so so much. It will take a lot of time until I have read the comics and novels, too, but I’m getting there.
In case you’re also late to the party and have no idea what Avatar is about, it’s about two siblings discovering a boy in an iceberg. He is the avatar, master of all four elements. Together they travel the world to stop the fire lord from taking over or destroying everything and making lots of new friends. It has found family, a cool friend group, cool animals, good character development & relationship dynamics and a generally positive, hopeful vibe.
Legend of Korra is a spin-off series set two generations later and is much darker and more grown-up but also extremely good. Please watch both shows and then come and cry with me about it.

You’ve learned by now that I’m not one for the videos. But I do like my books and I have discovered and rediscovered some amazing series I’d like to show you now. In case you’ve been following me on instagram, you probably already know which books I’m talking about. 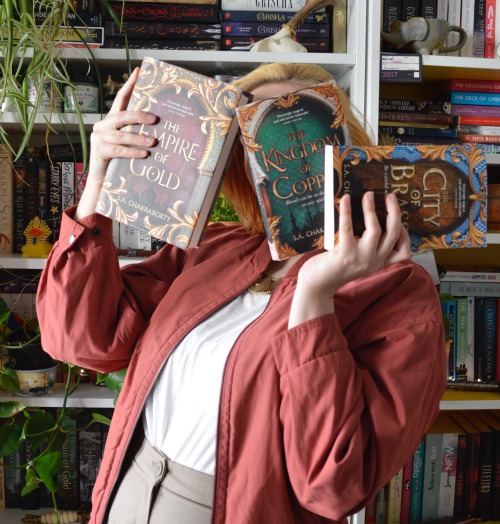 Let’s start with The Daevabad Trilogy by S.A. Chakraborty. I have to admit that while I liked the first book, City of Brass, I wasn’t too into it at first. But I started reading Kingdom of Copper not much later and was totally sucked into the world until nothing more than emotions was left of me. The story follows Nahri, a healer/thief from Cairo, who accidentally awakens an ancient warrior and travels with him to Daevabad, the capital of djinn. There, she learns a lot about herself and a world that had been hidden from her before.
And let me tell you, this trilogy is honestly so, so good and has everything my greedy heart desires: enemies to lovers, enemies to friends, sibling relationships, court intrigues, fierce women kicking men’s asses, cinnamon roll protagonists, tortured souls purely there to make me cry, amazing world building, mythology,… just. So much I love and all of this is so well executed. I am in awe of this world and I love it dearly.
You can read my review for Kingdom of Copper & Empire of Gold. 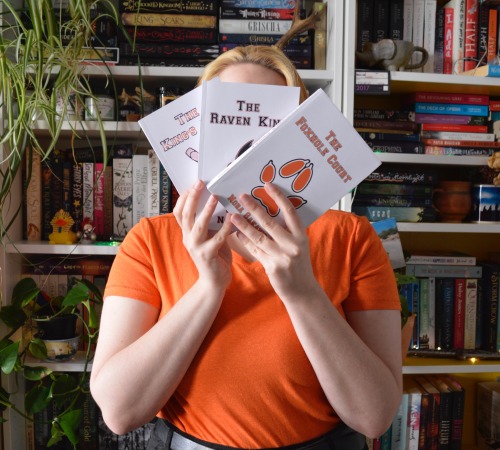 The next book series I became completely obsessed with was All For The Game by Nora Sakavic in June. The Foxhole Court had been standing on my shelves for what felt like 500 years after I saw it on social media a few times and just went ahead and bought it. I then read it for a reading challenge and did a buddy read with Dana. And, uh, fell in love. I immediately ordered copies of book 2 & 3 but also downloaded digital ones so I could continue reading without having to wait for their arrival. I read the entire series in 3 days and I have so much merch of it now. Oops.
Describing All for the Game is hard. It’s about a fictional sports and a fucked up team playing it and also there are mobsters and a boy on the run. This might sound weird and it also is weird, but I promise it’s also good. So good! I’m so, so soft for the characters. All of them have some kind of problem, wether it’s with their mental health, trauma, mobsters, anger issues or all of those. I think the more I talk, the worse it sounds but despite it all being so weird and fucked up, it’s so good and made me so addicted to it. 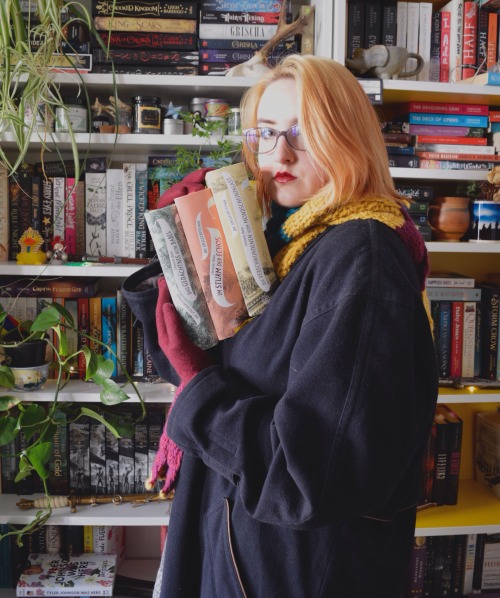 While my summer was wholly dedicated to Avatar, October came and with it, The Mirror Visitor series. This series by Christelle Dabos is about a world, broken up into different arks. Each ark has a deity, giving the people living on that ark certain magical abilities. Ophelia, a girl from Anima, is supposed to get married to Thorn from the Pole, an ark as cold and vicious as the people inhabiting it. Neither wants to really marry the other but both have to learn with their new circumstances.
I absolutely loved the writing style. It was as magical as the world and truly made the characters come to life for me. It took me a while to really get into the story, but I’m so glad I pushed through the rather slow beginning because over the span of the four books, it just gets better and there is so much happening. This is such a wonderful series. 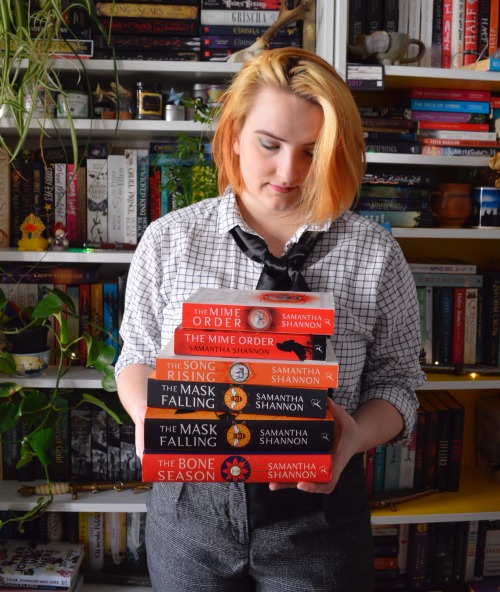 January was for becoming obsessed anew with a series. I read The Mask Falling by Samantha Shannon, the fourth installment of The Bone Season series. It was a wild ride with a lot of action and such beautiful, quiet moments, such a perfect mixture of character focus and plot focus. So far, it was definitely my favourite book in the series and when I say it broke me… it really broke me. I cried and wailed around for quite a while. And then for a week I talked and thought about nothing else. My partner still refers to it only as “THE book”. I’ve loved The Bone Season series for a while now but since 3 years have passed since the third book came out, I’ve lost touch with it a bit. But my love for this dystopian world and its criminal, rebellious characters came back and hit me full force. I am still in pain, but also in love.
Read my review for The Song Rising &  The Mask Falling here. 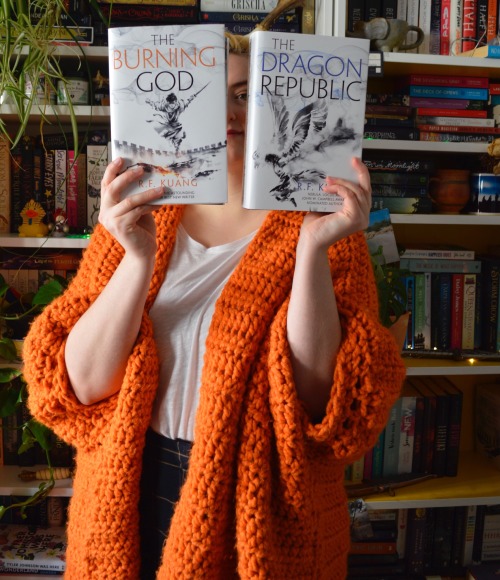 And just this month, February, I finally continued reading The Poppy War series by R.F. Kuang. Listen, I loved The Poppy War. But I fell in love with The Dragon Republic only to be destroyed by The Burning God. These books are brutal. In case you want to read them, definitely check out the trigger warnings first. They tell the story of Rin, an orphan from the south who makes space for herself in the north and who is good at one thing: war. Some scenes aren’t easy to read, but every scene is worth it. Following Rin and her group of fighters/scholars/rebels is amazing. The world building is amazing, the characters are complex and their development is so well written. And this series has one of the most fitting endings ever, it left me dead but I wouldn’t have wanted another one.

These are my latest obsessions, the ones I’m coming back to regularly and that are just … there. Stuck in my head, fueling me through these times. What about you? Are you currently obsessed with anything? And how are you – honestly?