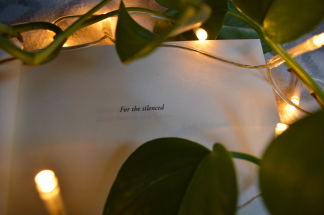 it’s time for another wrap-up. I’m actually quite happy with the reading I did this month. I’ve read some reeeeeally great books. Maybe this year is really going to be the year of continuing / finishing series, as I planned 2017 to be. But that’s how plans go. Anyways, here comes my reading month…

Alex’ sister Olivia disappears on new year’s day, after visiting a party. Of course Alex tries to find Olivia. Her parents are consumed by their grief, so Alex is more or less alone. She starts to work together with the detective who is working on Olivia’s case.
The story deals very graphically and realistically with trauma and grief and how it transforms people. It also tells of an unlikely friendship, of help in unexpected places and old wounds that finally have a chance to close. (read full review)

The second installment in the Conqueror’s Saga was a-m-a-z-i-n-g. It continues to follow Lada and Radu’s lives, that are now separated. Radu is still at Mehmed’s side and tries to help him in taking Constantinople, in the process learning important lessons about love and friendship and politics. Meanwhile Lada has set her mind on taking Wallachia more than ever. She has loyal elite soldiers and an ever growing number of followers. She has to play at politics as well, but she is not a person of mind, like her brother is, but one of the knife and the sword. And she becomes smarter and crueler with every day.
Wow, I love reading about historical happenings and politics. And I absolutely enjoyed this awesome book full of power and loss and betrayal. I LOVED IT.

This is the second book in the Bone Season series, and while I thought the Bone Season was okay, this one was absoluetly fantastic. The world building was way better, it was faster and more dramatic in general. And I can never get enough of Paige’s sass and sarcasm.
Paige has managed to get away from the colony of Sheol I, but her allies have suffered huge losses. Now it is time for her to get back to London and to rally the syndicate to help her in the fight against Nashira and her soldiers. But it’s not as easy as she would have thought. Nobody really cares about her mission, nobody listens to her, she has no power and then she is framed for murder. Nothing goes according to plan, but she has one chance: becoming Underqueen, the leader of the syndicate.

The third book in the Bone Season series, aka where I become very obsessed with this series. More world building, more cool characters, it never gets boring. Fast and exciting and plot twists everywhere. Well done, Samantha Shannon, well done.
Paige is finally able to get on with her mission to stop Nashira, thanks to her friends in the syndicate, as well as the Ranthen, Rephaim that are not loyal towards Nashira. But another danger for every clairvoyant in London looms ahead: Senshield, a device to detect unnaturalness. So it becomes essential to destroy Senshield, which is easier said than done. Paige has to go to Manchester, but there a trap is waiting for her. (read full review)

Red Rising is the first of a series. Darrow is a miner on Mars, digging for precious helium-3 which is needed to terraform the planet and make it inhabitable for other humans. After his wife dies, he is more or less forced to join a gang of rebels. He infiltrates the Golds, a superior human race who rule over all other people. Darrow gets a place in the Institute, basically a war school, where he learns to fight and survive, but where he also finds friends and loyalty and  learsn so much about society, but mostly, himself.
I wasn’t a fan of the beginning. I hate when a girl dies so the male protagonist gets a character development. Apart from that, the book was amazing though, getting more and more interesting from page to page. The world building was fantastic and so were the characters. (read full review)

The second, better-than-the-first book in the Red Rising series. It was even more gripping than the first book.
Darrow managed to win the Institute, so he goes to the Academy, a school for warfare. He belongs to the ArchGovernor of Mars, but after a huge mistake, he is set free from his contract. So Darrow has to find new allies. Old and new friends help him with that. And together they start a fight against the Sovereign, who clearly is not a neutral ruler, but has her own plans.

The Pale Dreamer is set before the Bone Season and tells the story of how Paige became the Pale Dreamer, the mollisher of the mime-lord of I-4 cohort. In this story, she realizes for the first time what kind of power she really has and what she can use it for. She also starts to really get to know the syndicate and how it works.
I wish I would have read it before I read the Mime Order and Song Rising. Because it is fun to read, but it could be a bit boring because by now I already knew so much more than Paige at this point. It is really weird to know so much more about a character. But nevertheless I loved the Pale Dreamer.

I can’t even pick one highlight for January, I just read too many great books! And the Red Rising series, as well as the Bone Season series are definitely new favourites and are going to be highlights of the year.

What about you? Do you have a January highlight?