As kids, Mark and his cousin Talia spent many happy summers together at the family cottage in Ontario, but a fight between their parents put an end to the annual event. Living on opposite coasts – Mark in Halifax and Talia in Victoria – they haven’t seen each other in years. When their grandfather dies unexpectedly, Mark and Talia find themselves reunited at the cottage once again, cleaning it out while the family decides what to do with it.
Mark and Talia are both queer, but they soon realize that’s about all they have in common, other than the fact that they’d both prefer to be in Toronto. Talia is desperate to see her high school sweetheart Erin, who’s barely been in touch since leaving to spend the summer working at a coffee shop in the Gay Village. Mark, on the other hand, is just looking for some fun, and Toronto Pride seems like the perfect place to find it.
When a series of complications throws everything up in the air, Mark and Talia – with Mark’s little sister Paige in tow – decide to hit the road for Toronto. With a bit of luck, and some help from a series of unexpected new friends, they might just make it to the big city and find what they’re looking for. That is, if they can figure out how to start seeing things through each other’s eyes. (goodreads) 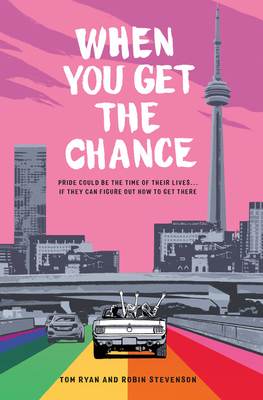 Before talking about what’s inside, can we take a moment and appreciate the cover for a second? I live for these super queer covers! Now, let’s just say the cover gave me exactly what I expected from the story: a fun, quick and very queer read. I read this in one sitting, a thing I haven’t done in a while and I’m so happy.

The story is told from two PoVs: Talia and Mark‘s. I loved Talia from the very start. Maybe especially because she reminds me a lot of myself. She’s from Victoria and apart from her dad and her maybe-partner she doesn’t really socialize much. She’s more on the quiet side but she also doesn’t keep back her opinion on things, especially when someone is disrespectful or does something stupid and she definitely doesn’t take shit from anyone. Talia also takes time to explain things to others.
Mark, on the other hand I had my problems with. He’s 18 but he felt so much younger. Where Talia is caring for others, even when they’re not even there, Mark’s whole life is centered around himself and to put it quite frankly, he’s an asshole. I just wanted to grab him and shake him a few times, I was so annoyed. I think out of all the characters he goes through the most changes and while I didn’t like him as a character I thought he was well written and I always appreciate well written characters.

A character I didn’t expect to love as much as I did was Paige. She’s ten and not the super annoying little sister you might think she is. At some points, she felt like the wisest out of all of them (except for the grandmother) and also so much older than her brother, Mark. She asked all the right questions and was just there to make peace between everyone while still being a child. I enjoyed her incredibly smart and upbeat character immensely.

Generally, I loved how the whole family was written. It had a badass grandmother and their estranged children plus teenage grandchildren all being thrown together after 7 years. Of course that creates problems and I loved reading about how they all struggled and got through them and how their relationships developed.

What I came for in the first place, the queerness, was wonderfully woven into the story. There were two queer protagonists, but then there’s also Paige who askes about sexuality and gender. That’s a wonderful method to explain terms and labels for the reader. We also get a bit of background on LGBT+ rights and history, as well as queer identities and Pride in general.

But what somehow completes the book is the atmosphere of it. It’s a Canadian summer, most of the story takes place somewhere in the woods and you get this sense of clear blue skies, insects buzzing and a calm state of being, interspersed with campfires and some family drama and old memories bubbling up. Then you have the contrast of Toronto during Pride, loud and colourful and the heat making your clothes stick to your skin and you could just imagine all of it so well, the city and the nature and the feel of it all. It was so beautiful to read.

So, what can I say? If you want a family-centered, super queer story, When you get the chance is definitely the book for you. I thoroughly enjoyed this book and the only thing I needed a long time to warm up to was Mark. Apart from that, this was a wonderful read!