ONCE UPON A BROKEN HEART by Stephanie Garber | ARC-Review

I loved the Caraval series by Stephanie Garber a lot. A lot a lot. So the more excited I was when it was announced that there would be a spin-off with one of my favourite characters from the series, Jacks. Because I loved both the books and their world and also Jacks so much, I had very high expectations for Once Upon A Broken Heart. If they were met, you can find out in the following review!

*NOTE: I received this book from the publisher via NetGalley in exchange for an honest review!*

Evangeline Fox was raised in her beloved father’s curiosity shop, where she grew up on legends about immortals, like the tragic Prince of Hearts. She knows his powers are mythic, his kiss is worth dying for, and that bargains with him rarely end well.
But when Evangeline learns that the love of her life is about to marry another, she becomes desperate enough to offer the Prince of Hearts whatever he wants in exchange for his help to stop the wedding. The prince only asks for three kisses. But after Evangeline’s first promised kiss, she learns that the Prince of Hearts wants far more from her than she’s pledged. And he has plans for Evangeline that will either end in the greatest happily ever after, or the most exquisite tragedy. 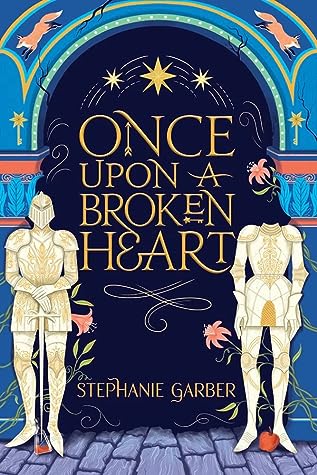 Oh, there is something about Stephanie Garber’s books that really gets to me. Right from the first page, I knew I was going to love Once Upon a Broken Heart. The writing style and the choice of words just felt very magical and like a fairytale. In a way, that’s exactly what this story is. And I just loved how well the writing matched the atmosphere of the book.

I can’t say how happy I was to be back in this world, even though this story is set in a yet unknown place, but a place that isn’t less magical than the ones already known from Caraval. Instead, we’re now in the cold North, that has the atmosphere of an enchanted winter’s day, beautiful, yet dangerous. I liked this setting a lot.

I said it before, but I really do love Jacks. Not necessarily his character but the way he is written. I would never wish to cross paths with him but oh, I do love reading about him and the many facettes to his character that come forth slowly and at unexpected times. There are so many questions I have about him and I NEED ANSWERS.
I also really liked Evangeline. She’s a hopeless romantic while at the same time is very selfreflected. Even when she does something reckless she is fully aware about that situation, but she sometimes doesn’t care about that or cares too much. I loved how she was written. The third person PoV gives the reader a distance to the character while at the same time the magical writing style brings you closer to her.

What was also well done was the pacing of the story. There was always something going on and when there was a page without something, I was constantly expecting the next action. The story kept me reading and reading, unable to stop (only when I fell asleep reading did I actually stop lol), I wanted to know what was going to happen next and which plot twist Stephanie Garber had thought of next.

Overall, Once Upon a Broken Heart felt very much like a fairytale you’d tell your younger cousins when they’re staying over and it’s already dark outside but there are snowflakes tumbling down outside and you can just make them out in the light of the streetlamp. It was a gorgeously written book with great characters, many, many plottwists and wonderfully romantic undertones.
If you liked the Caraval series, this is a must read for you!