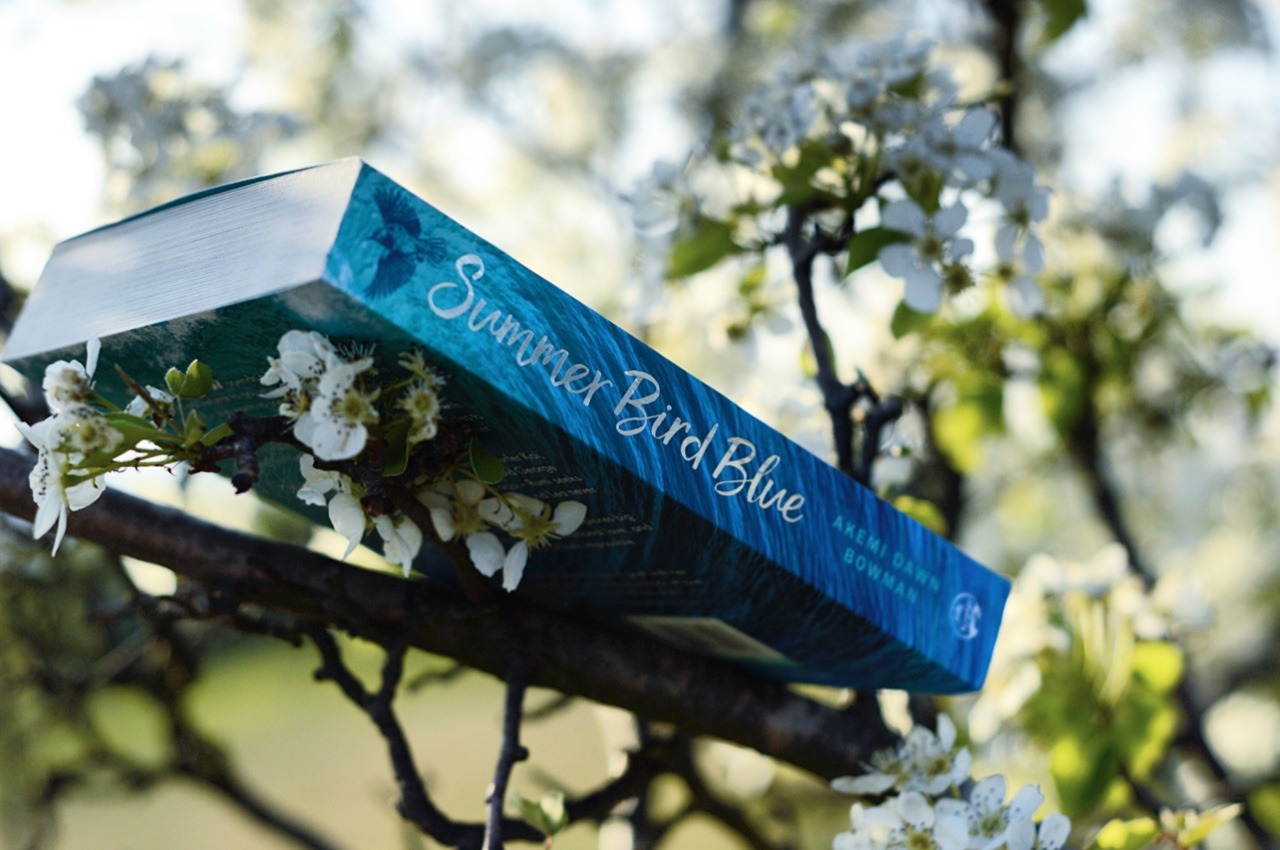 Rumi Seto spends a lot of time worrying she doesn’t have the answers to everything. What to eat, where to go, whom to love. But there is one thing she is absolutely sure of—she wants to spend the rest of her life writing music with her younger sister, Lea.

Then Lea dies in a car accident, and her mother sends her away to live with her aunt in Hawaii while she deals with her own grief. Now thousands of miles from home, Rumi struggles to navigate the loss of her sister, being abandoned by her mother, and the absence of music in her life. With the help of the “boys next door”—a teenage surfer named Kai, who smiles too much and doesn’t take anything seriously, and an eighty-year-old named George Watanabe, who succumbed to his own grief years ago—Rumi attempts to find her way back to her music, to write the song she and Lea never had the chance to finish.

I already adored Starfish, Akemi Dawn Bowman’s first novel, and I loved this one as well. What I really need to say is that I’d probably read anything she ever writes because she manages to write in such a realistic way and she does so beautifully. Summer Bird Blue touched my heart and soul. I cried (more than once) and I smiled and just got very emotional in general.

After her sister Lea dies, her mother sends Rumi to Hawaii to live with her aunt Ani for a while. Rumi doesn’t understand why, she feels alone and lonely and angry with everything and everyone. She is lost in her grief, disappointed in her mother for leaving her alone. If I had to describe the three parts of this book in shades of blue, I’d describe the first part as the dark blue of the night sky. It’s almost black, but not entirely, it is dark and feels vast and frightening. You could get lost in it and that’s what Rumi’s grief feels like. She’s in the phase where she just wants to be alone and stays in bed for days, searching for conflict and being mean to everyone. 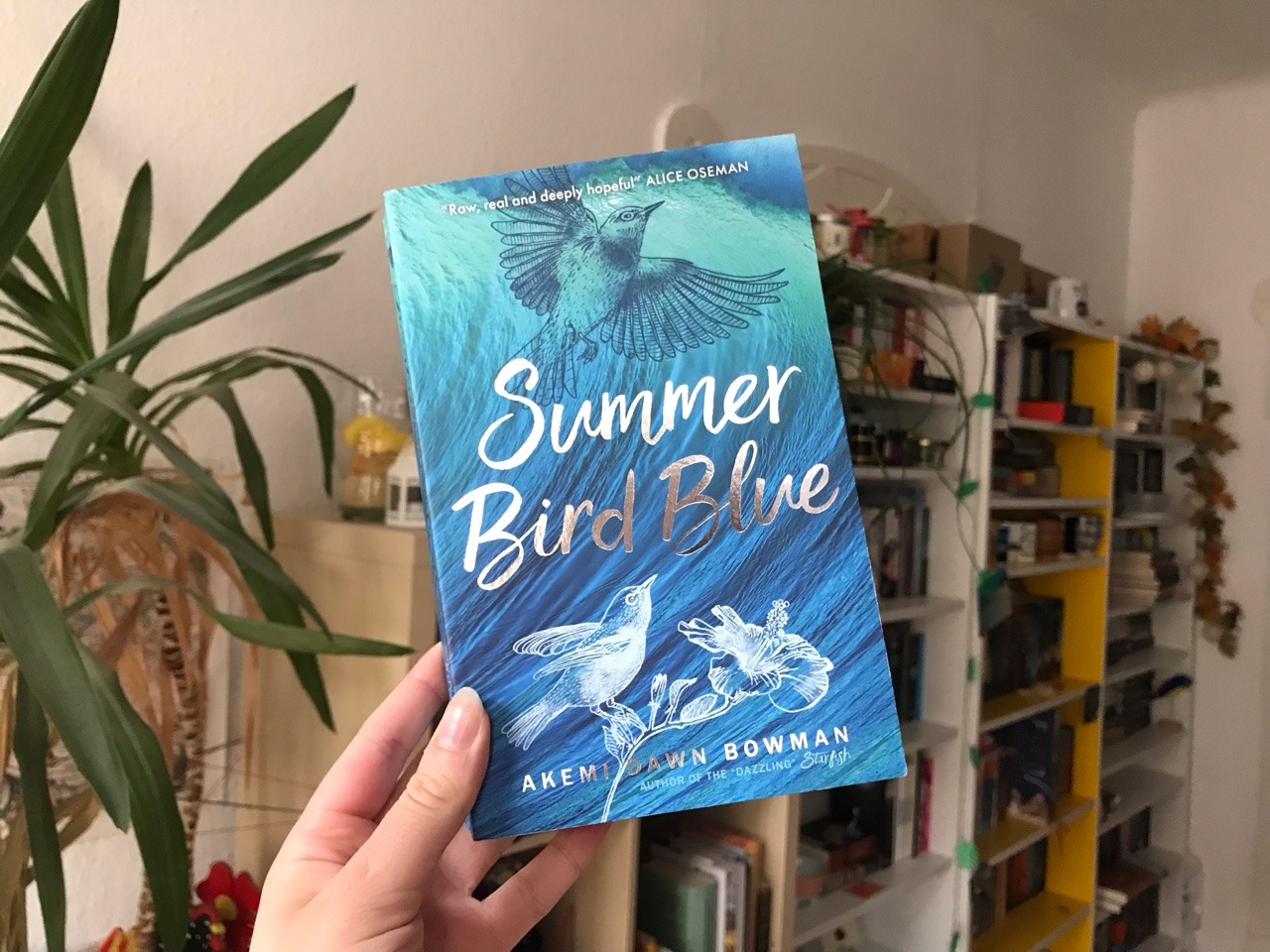 But the further the story goes, the lighter it gets. Rumi learns to live with the grief, she starts to accept that she has to live without Lea and she learns to accept help, not only with coping with her sister’s death but also with herself. She tries to understand her sexuality and while she thinks she might be aro and/or ace, she isn’t sure and doesn’t want to label herself because it doesn’t feel right.

There are some wonderful supporting characters in this story. For one, there’s her aunt Ani, who doesn’t know how to treat Rumi but does the best she can. She never leaves Rumi’s side even when the latter is awful to her. Then there are Ani’s neighbours. Kai is Rumi’s age and always joking and laughing. He’s not entirely sure about what to do with his life and becomes Rumi’s friend even though she doesn’t know it yet. Kai’s friends are helpful and amazing as well, all of them are so open minded and full of love and life.
Then there’s Mr. Watanabe, who doesn’t speak much and is generally quite cranky, but he is a great listener and helps Rumi in ways no other person could. He also has an adorable dog. To be honest, I’d read an entire book about Mr. Watanabe and his dog.
And of course we cannot forget Rumi’s mother who has to deal with the loss of a daughter. While I don’t agree with her in every point, she deals with it in a way she finds best for herself and Rumi.

Through the entire story of loss and grief is a theme of hope that is only there as a sliver at first but expands. Since Rumi is the protagonist, the story develops with her. The blue that was a dark sky becomes lighter with every page, with every little detail Rumi accepts.
One of the biggest parts in the book has music though, and I loved every bit of it. It changes with the characters and also changes the characters themselves, it grows with them and they grow with it. It has such a big part in this story. I loved the snippets of song lyrics.
I also loved the composition of the here and now and the memories Rumi has with Lea. We get to know Lea even though she isn’t there anymore, we get to see a sisterly relationship but also their relationship with their mother and just general family life.

The whole book was so beautifully written, perfectly capturing the atmosphere of the story and bringing the characters to life. I just felt this book. I don’t know another way to explain this, but I felt connected with it. And with my whole being at that. It was beautifully heartbreaking. Or heartbreakingly beautiful. It works both ways.